Mookie Betts is pretty much the best player in baseball not named Mike Trout. The difference is MLB fans are treated to Betts' incredible athleticism in the playoffs because he's played for some terrific teams.

Besides being a five-time All-Star, four-time Silver Slugger, five-time Gold Glove winner, 2018 American League MVP and two-time World Series champion, Betts is uber-talented at many other things. The 29-year-old is a distinguished professional bowler who learned from his mother, Diana Benedict, and can solve a Rubik's Cube quicker than he steals bases.

Betts, of course, grew to baseball stardom playing for the Boston Red Sox. He was traded and then signed a mind-blowing 12-year, $365 million contract with the Los Angeles Dodgers that skyrocketed his net worth. So far, he's lived up to the deal by helping them win the 2020 World Series in a season shortened by the coronavirus pandemic.

The Dodgers' star has fans across the globe, but his biggest two may be the girls he loves. 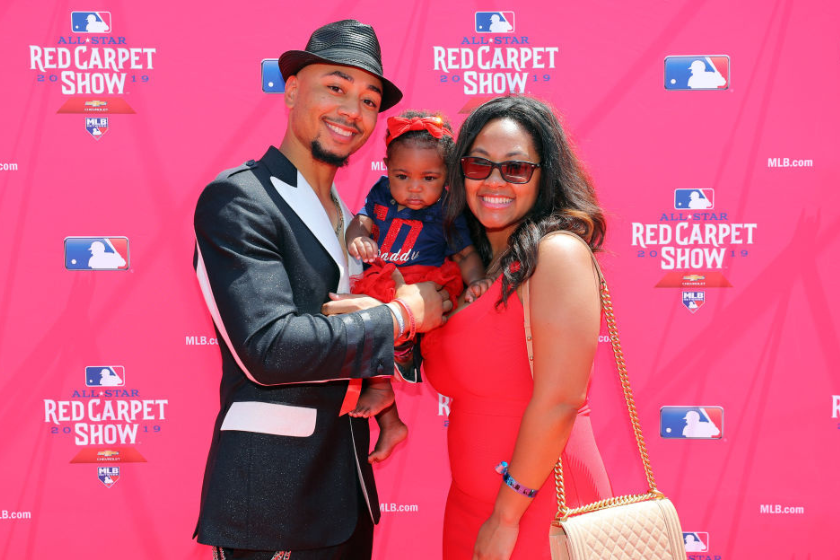 RELATED: Cody Bellinger's Girlfriend Dated Another MLB Star Before Him

Mookie Betts's former girlfriend Brianna Hammonds, now his wife, has been by her MLB superstar hubby for a long time, judging from posts on her Instagram account. Not much is known about her other than her full name is Brianna Michelle Hammonds and that she graduated from Middle Tennessee State University in 2015.

The two celebrated their seventh anniversary in 2012, which means they've been together for some 16 years now. Considering Betts is just over 30 years old, that means they started dating when he was 13 and in middle school. After 15 years of dating, you'd hope the couple is sure about their relationship!

Born Markus Lynn Betts, Mookie is from Nashville, Tennessee, and attended John Overton High School before committing to play at the University of Tennessee (then signing with the Red Sox for $750,000). The professional baseball player likely met his longtime girlfriend in The Volunteer State.

Hammonds has been to quite a few of her boyfriend's baseball games over the years. She's attended minor league baseball games, galas and even celebrated on field at Fenway Park during Boston's 2018 World Series run.

When the right fielder won the American League Most Valuable Player award, she and the rest of his family was right by his side.

"Our MVP??So Incredibly proud of everything you have accomplished! You have worked so hard and now you are being rewarded! 2018 is a year we will never forget!" she wrote on Instagram.

Betts personal life reached another milestone in January 2021 when he popped the question. Soon Mookie Betts' girlfriend will be Mookie Betts' wife. The LA outfielder celebrated on social media.

"@briannamichelle1 has been by my side since we were teenagers. Together we've grown mentally, physically, and spiritually. She is my best friend, mother of my child, my lover and my soon to be wife. Winning another World Series was great, but putting a ring on MY MVP is the REAL BLESSING! I am a blessed man," he said in an Instagram post.

The Dodgers star, by the way, became the first player in Major League Baseball history to win an MVP, Silver Slugger, Gold Glove, batting title, and World Series in the same season. Take that, Trout!

The couple was married ahead of the 2022 MLB season in December of 2021. Now that Mookie is playing for the LA Dodgers, the wedding ceremony was held in California, more specifically in Palos Verde at the Terranea Resort.

And although Dodgers manager Dave Roberts probably doesn't allow partying during the season Dodger stars like Kenley Jansen, Justin Turner and Joe Kelly showed up, along with rapper Nelly.

The MLB player was overjoyed when she came into the world.

"Never knew what unconditional love meant or how it felt until I met this little princess. Nov 6th 2018 is a day I'll never forget," he wrote on Instagram.

After Betts hit three home runs against the San Diego Padres in 2020, marking an MLB record-tying six career three-home run games, he shared an adorable video of Kynlee's reaction to her father raking. She cheers the loudest in any game, whether it's a regular season matchup against the New York Yankees or a playoff series against the San Francisco Giants.

I think it goes without saying that Brianna and Baby Betts are Mookie Betts' biggest fans.

This article was originally published on October 15, 2021 and has bee updated since.

MORE: Why Does Max Scherzer Have Different-Colored Eyes?