MLB Player Punches Pitcher, Gets Laid Out By First Baseman 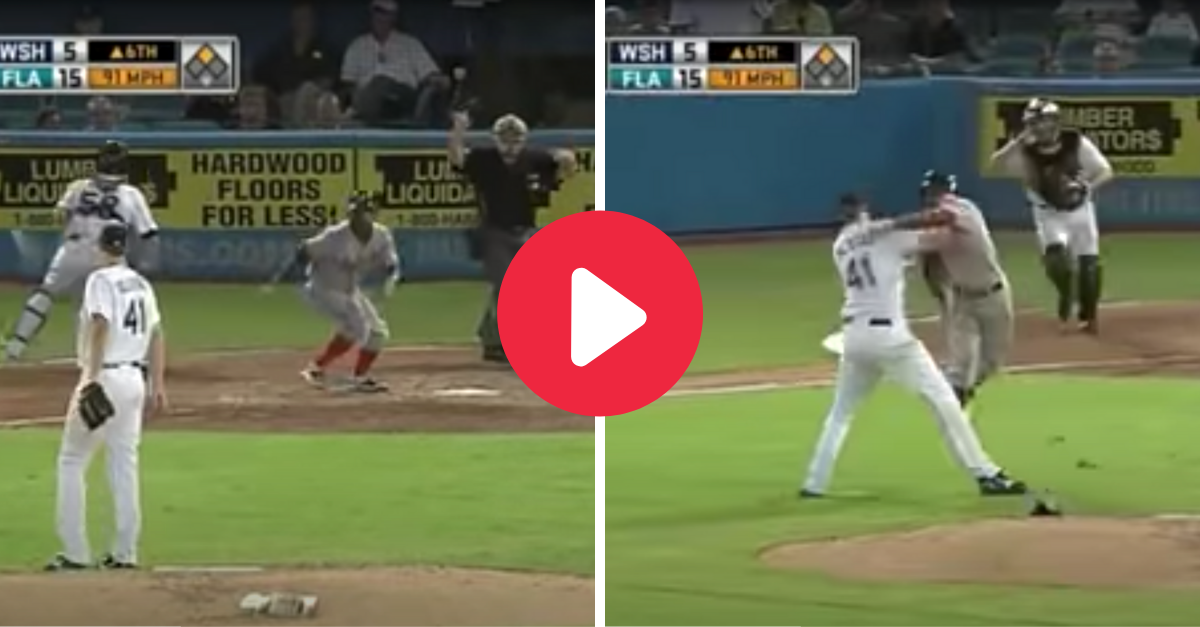 Charging the baseball mound comes with risks. Most of the time, the pitcher is the one in danger. Batters have used their bats as weapons by attacking catchers or throwing them at pitchers. Bryce Harper even tried throwing his helmet at Hunter Strickland in an explosive brawl.

Sometimes, though, it isn’t wise to attack the man on the mound. Nolan Ryan put Robin Ventura in a headlock and beat the living hell out of him. This minor leaguer hurled a fastball at the opposing dugout and struck fan. (Don’t worry, he served 30 days in jail.)

When a pitcher has backup, you can expect a batter to be in trouble. Quickly.

That’s exactly what happened when the Florida Marlins and Washington Nationals played each other in 2010.

What Led To The Brawl?

S/O to Nyjer Morgan aka "Tony Plush", the only person (I can think of) to play in the @MLB, @NPB, KBO, and @TheWHL. pic.twitter.com/rOFfrfRyVS

For those that don’t remember Nyjer Morgan, let me introduce him once more.

It’s well-known that he played ice hockey growing up in California, and that makes sense considering his propensity for fighting in baseball games ? He was a ruthless hockey player in a baseball jersey.

Let me give some background on this fight: Just six days before getting into one of MLB’s most epic brawls, Morgan was given a seven-game suspension for allegedly throwing a ball at a fan when the Nationals played the Philadelphia Phillies at Citizens Bank Park. He produced plenty of other hotheaded moments throughout his career.

On September 1, 2010, the Nationals centerfielder lost it in Miami.

The day before, Morgan collided with Marlins catcher Brett Hayes and separated his shoulder, keeping him out for the rest of the season. The next game, Morgan was plunked by a pitch from Florida Marlins pitcher Chris Volstad in the fourth inning. Morgan then stole second and third base in a game the Nationals were losing 14-3 at the time.

Morgan’s fuse wasn’t set off until Volstad fired a fastball behind his back in the sixth inning. So the 6-foot Morgan charged at the 6-foot-8 Volstad.

The result? An epic brawl featuring a punch and a clothesline that rattled Morgan’s brain.

Morgan was decked by Marlins first baseman Gaby Sanchez in the fight. The benches cleared, and it was on like freaking Donkey Kong. I still remember watching this live (yes, I grew up a Marlins fan) watching in absolute disbelief.

“I understand they had to get me back a little bit,” Morgan said after the game. “It’s part of the game … I guess they took it the wrong way. He hit me the first time, so be it. But he hit two other of our guys?” (Volstad did indeed hit three batters on the day.) “All right, cool. But then he whips another one behind me, we got to go. I’m just sticking up for myself and just defending my teammates. I’m just going out there and doing what I have to do.”

It was clear Volstad threw at him again after he stole two bases two innings earlier.

“That’s the only reason we tried to go after him a second time …” Marlins third baseman Wes Helms told the South Florida Sun-Sentinel. “I cannot stand when a guy shows somebody up … There’s just no place in baseball for that. In my opinion, you’re going to get what’s coming to you if you do that.”

The Marlins won the shootout, 16-10. Morgan was suspended by MLB for eight games and fined for the incident. He served the eight-game suspension on September 17.

Morgan didn’t last long in baseball. He didn’t care about written or unwritten rules. He did what he wanted, when he wanted. The outfielder often butted heads with Nationals manager Jim Riggleman in 2010 and was traded to the Milwaukee Brewers in 2011.

By 2014, his time in Major League Baseball was up. He played overseas in Japan, Korea and Mexico afterward but never lasted long.

The lasting image of Nyjer Morgan will forever be getting laid out by Gaby Sanchez. That’s probably for the best considering he treated baseball like the NHL.