Former Cincinnati Reds star Pete Rose is one of the most controversial figures in MLB history.

The all-time MLB hits leader has been denied by the Baseball Hall of Fame and was issued a lifetime ban from baseball after it was revealed he was betting on the sport while serving as a player-manager in 1986 and when he was the Reds' skipper in 1987.

While many believe Rose deserves a spot in Cooperstown, there's no one pulling harder for him to get into the Hall of Fame than his fiancée Kiana Kim.

By the way, Pete Rose on Donald Sterling the other day: "... my fiance is a lot better looking than his girlfriend." pic.twitter.com/DmdUxx4XsA

She attended Arizona State University and has two children from a previous marriage. The two first went public during an appearance on the Howard Stern Show and later starred in their own reality TV show Pete Rose's Hits & Mrs., which aired for one season.

Prior to his relationship with Kim, Rose was married twice. He married his first wife Karolyn Englehardt in 1964 and had two children with her, daughter Fawn and son Pete, prior to their divorce in 1980.

He married his second wife Carol J. Woliung in 1984. The pair also had two children together, son Tyler and daughter Cara.

The former professional baseball player and Carol Rose divorced in 2011, but the proceedings were never finalized, resulting in Rose trying to finalize the divorce in 2018 as he looked to marry Kim.

Here's Carol and Pete on the set of the Phil Donahue Show in 1989: 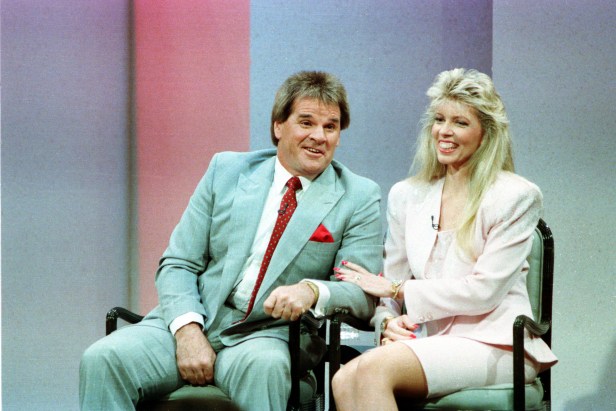 In court documents, Rose revealed his health was deteriorating and that his financial situation had worsened, as his annual income had been slashed from $1 million per year down to $453,000 after being let go from his role with FOX Sports.

Rose previously made that $1 million largely from autograph signings and public appearances. His ex-wife Carol alleged in a Los Angeles Superior Court that Rose was a high-stakes gambler who was in debt with various casinos and the IRS, per TMZ.

Throughout Rose's MLB career he made 17 All-Star appearances, won three batting titles, took home a National League MVP, and earned three World Series rings. He finished his 24-year career with an incredible slash line of .303/.375/.409 and retired as the all-time hit king with an untouchable 4,256 hits in 14,053 at-bats.

The key member of the "Big Red Machine" played in 3,562 baseball games throughout his career with the Reds, Philadelphia Phillies and Montreal Expos and hit 160 home runs. The first baseman's best season came in 1973 when he hit .330 and logged 230 hits, winning the Most Valuable Player award.

Rose was banned from baseball in 1989 after it was revealed by ESPN that he had been betting on his own team while managing the Cincinnati Reds. His actions have left him out of Cooperstown, and despite many attempts at reinstatement, Major League Baseball commissioner Rob Manfred has consistently denied him.

The Cincinnati, Ohio native and Western Hills High School graduate is now 79 years old and still hopeful that one day his ban from baseball will be reversed, but for now he remains on the outside of Cooperstown looking in.