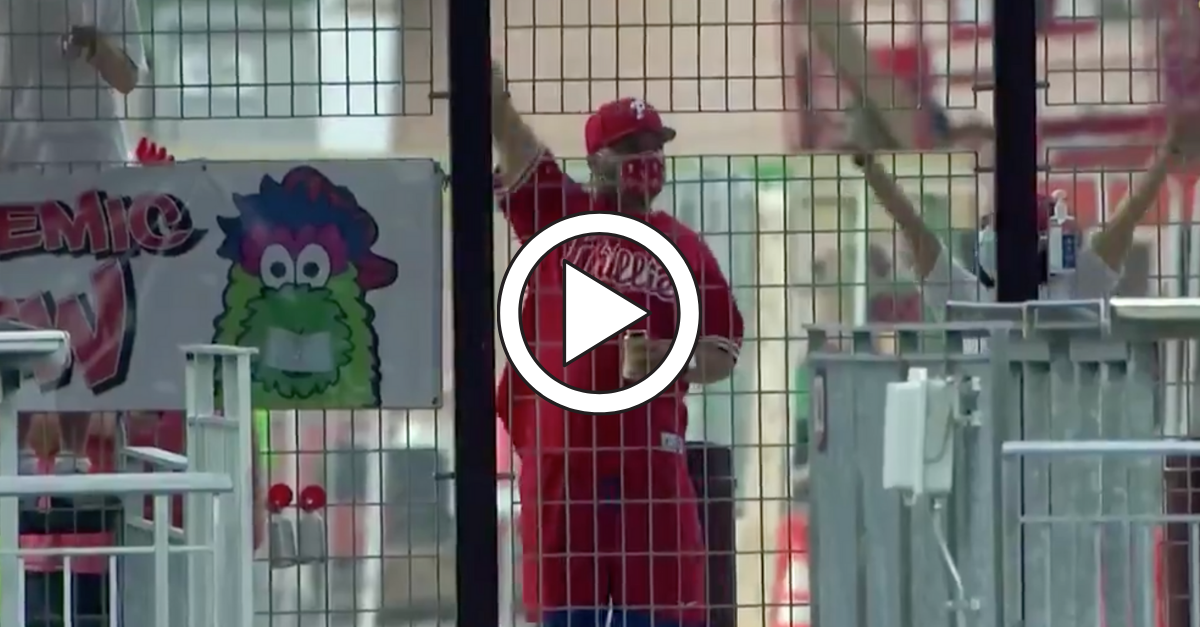 Major League Baseball fans might not be allowed inside stadiums this season, but that?s not stopping a few from trying to be part of the action. Nobody understands that more than when the New York Yankees played the Philadelphia Phillies at Citizens Bank Park.

As if facing superstar Bryce Harper wasn?t tough enough, a group of Phillies fans started a club of their own to annoy opposing MLB teams. The Phandemic Krew camps behind Ashburn Alley near the center field gate, and they aren?t afraid to use air horns or a drum line to distract hitters.

To many, this is hilarious and shows how loyal Philly fans are. Not to New York Yankees manager Aaron Boone, though. He clearly wasn?t a fan.

Yankees manager Aaron Boone is apparently NOT a fan of the airhorn that Phillies' fans have outside the ballpark and complained. 😂 pic.twitter.com/tafCDeqLkZ

Ever since the opening weekend series against the Miami Marlins, The Phandemic Krew has been there to cheer on their beloved Philadelphia Phillies. It?s the best way for them to show support during the coronavirus pandemic and COVID-19 outbreak.

Things went to another level against the New York Yankees. Fans outside of the ballpark started blowing air horns and even had a drum line, according to NBC Sports Philadelphia.

"I heard yesterday that their announcers were being really loud mid-pitch during JA and other guys' pitches and not doing the same for their team. It's kinda messed up that they're out there, but it is what it is."

– Jordan Montgomery on the noise the past two nights pic.twitter.com/HQgifVTdBl

?The drum line yesterday was crazy,? Yankees pitcher Jordan Montgomery said. ?I heard them, but it?s no different than fans in the stands. I heard yesterday that their announcers were being really loud during JA and other guy?s pitches and not doing the same for their team. It?s kind of messed up that they?re out there, but it is what it is.?

Yankees manager Aaron Boone went as far as coming out of the dugout after the top of the third inning and talking to the umpiring crew about it during the series finale on Thursday night. The noise could be heard as Phillies pitcher Zach Eflin retired Aaron Hicks, Giancarlo Stanton and Gleyber Torres in order. Enough was enough.

On the other hand, Phillies players such as catcher J.T. Realmuto, who hit a three-run homer in the 5-4 win, enjoyed having the fans around for every at-bat.

“It’s great. It’s nice to at least hear something out there. They had the horn going pretty well tonight 😂It’s fun to get a little fans out there. It’s better than listening to silence” pic.twitter.com/bsxLa2P0lY

?Honestly, it?s nice to at least hear something out there, even if they are far way. They had the horn going pretty well tonight and I heard a few of their chants,? he said after Thursday?s game. ?It?s fun to at least get a little bit of fans out there. It?s better than listening to silence.?

Whether you are a fan of the air horn or not, it?s easy to love the group of fans outside Citizens Bank Park. It proves the Phillies and manager Joe Girardi have a passionate fan base. This MLB season is already weird with no crowds and there?s no doubt The Phandemic Krew is going to be there to do their part as long as they can.

MORE: Umpire Pulls Moth Out of His Ear During MLB Game