Major League Baseball commissioner Rob Manfred has made a series of changes to baseball over the past few years, some of which have had a positive impact on the sport and others which have been less pleasing to MLB fans. Manfred's decision to cancel games following failed negotiations between MLB ownership and the MLBPA has fans and pundits in a rage, further cementing his reputation as a commissioner who exists to serve his billionaire bosses.

Love him or hate him, Manfred is the man in charge, and he's being paid like it, too. So, just how much money does the commissioner of Major League Baseball make? Let's just say it pays to be the man in charge.

Who is MLB Commissioner Rob Manfred? 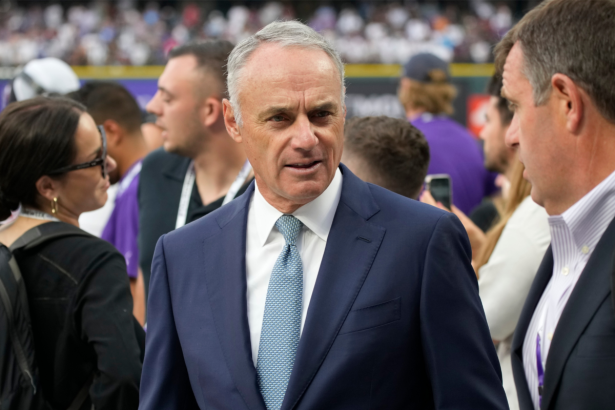 Before his spell as commissioner, the 62-year-old Manfred worked for the MLB Players Association, representing the league in collective bargaining agreements, as well as crafting the first drug testing agreement for MLB. As a member of the MLBPA, Manfred worked on CBAs in 2002, 2006 and 2013, utilizing his Cornell education in labor relations and employment law. However, Manfred also worked for Major League Baseball, leading the league's investigation into Biogenesis, a rejuvenation clinic that was supplying players like NL MVP Ryan Braun and Alex Rodriguez with performance-enhancing drugs. At the end of the 2013 season, then-commissioner Bud Selig promoted Manfred to the Chief Operating Officer of Major League Baseball, where he stayed until his latest promotion.

Manfred has been occupying his role as commissioner since 2015 after taking over for Selig. Manfred vowed to improve the game's pace of play, something he felt was plaguing the sport and resulting in a decrease in popularity. Ultimately, his efforts to improve pace of play have been futile.

Additionally, the overall consensus among MLB fans is that Manfred didn't issue a significant enough penalty on the Houston Astros, whose sign-stealing scandal rocked the sport in 2019. Los Angeles Dodgers fans, in particular, were upset, considering the Astros defeated them in the 2018 World Series. New York Yankees fans were equally disgruntled after their defeat to Houston in the 2017 ALCS.

While Manfred ultimately dropped the ball on the Astros, rather than the hammer, he did work with Tony Clark and MLB owners in a painfully long process to hold a shortened regular season and full postseason during the coronavirus pandemic. The 60-game season had no Spring Training and saw many players take sizable pay cuts, while Manfred was due to reduce his salary by a mere 35 percent. Washington Nationals ace Max Scherzer was one of many players to voice his displeasure over the situation. ESPN's Jeff Passan detailed the staggering pay cuts and how they would impact the players.

The Associated Press reported the massive loss in revenue MLB experienced in 2020, which saw clubs such as the Cubs lay off large amounts of employees. Manfred even went on CNN to explain to Anderson Cooper that the league lost nearly $4 billion.

What's next for Manfred is his proposal of the expanded playoffs, which he hopes to open up to 14 teams by 2022, and has been a sticking point for MLB ownership amidst the 2022 MLB Lockout. The Harvard Law School alum's changes this last year haven't been extremely popular, most notably the seven-inning doubleheaders and runner on second in extra innings.

But don't worry, Manfred was finally able to bring the designated hitter from the American League to its National counterpart. Baseball is saved! 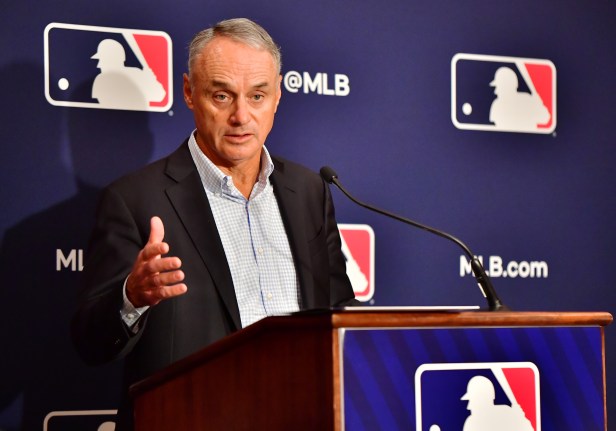 So, just how much money is the commissioner making each year?

Per reports, Manfred's annual salary is $11 million per year, with annual raises built into his contract all the way through 2024, according to The Washington Post. His five-year contract extension was approved in 2018 unanimously by MLB owners. To put Manfred's salary in a different light, MLB's commissioner makes almost three-times the league average player salary of $4.17 million.

It's crazy to think that Manfred is making as much annually as New York Yankees slugger Aaron Judge and St. Louis Cardinals catcher Yadier Molina, but he is.