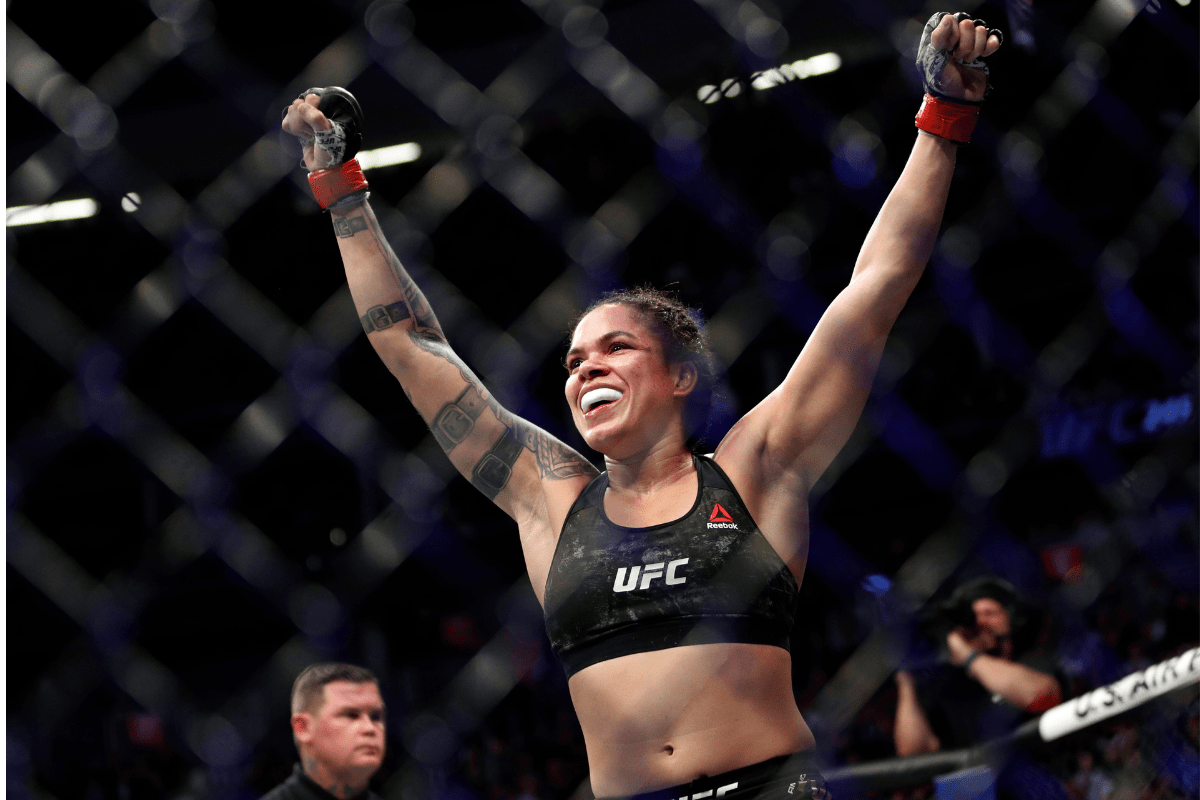 Amanda Nunes is arguably the greatest female fighter the UFC has ever seen.

The Brazilian star is the reigning champ at both the bantamweight and featherweight divisions, and is currently ranked as the No. 1 pound-for-pound fighter in the world.

The queen of MMA has amassed a fortune from her highly successful career as a UFC fighter.

Just how much money has she hauled in? Let’s find out.

Amanda Nunes boasts an impressive 20-4-0 record in the UFC, and is the first woman mixed martial artist to become a two-division UFC champion in the Octagon.

Nunes got into combat sports from a young age, training in karate at age four in her native Salvador, Bahia, Brazil.

By the time she was 16, Nunes was training in mixed martial arts, boxing and perfecting her craft in Brazilian jiu-jitsu. She competed in the Prime MMA Championship, Strikeforce and Invicta FC before transitioning to the UFC.

Surprisingly, Nunes’ career as an MMA fighter started off with a loss to Ana Maria back in 2008, losing via submission in the first round at Strikeforce Challengers 13.

Nunes would win each of her next six fights, via knockout or TKO, before hitting a rough patch. She lost three of six fights, including a victory against Sheila Gaff and a defeat to Cat Zingano at UFC 178.

Those wins lined her up for a bantamweight title fight against Miesha Tate at UFC 200. Nunes took down Tate via submission to become the UFC women’s bantamweight champion.

Nunes then defended her belt at UFC 207 when she quickly disposed of Ronda Rousey, defeating her in just 48 seconds during the main event.

Her next fight came in 2017 during a rematch with Shevchenko, where she defended her UFC women’s bantamweight championship title with a victory via split decision at UFC 215. She once again was named the bantamweight champ after defending her title against Raquel Pennington at UFC 224.

In 2018, Nunes changed weight classes, facing off in a title fight against Cris Cyborg to become the Ultimate Fighting Championship’s featherweight champ. At UFC 232, Nunes put on a dominant display to knockout Cyborg in the first round and claim her place as a two-division champion.

Nunes returned to the bantamweight division in 2019 to defend her title against the renowned Holly Holm, defeating her opposition in the first round at the T-Mobile Arena in Las Vegas. She once again defended her bantamweight belt in December of 2019 when she took down Germaine de Randamie via decision.

Her most recent fight came at UFC 250. when she defeated Felicia Spencer to defend her featherweight title.

Nunes will square off against Megan Anderson at UFC 259 in March 2021.

“The Lioness” is known to be married to a fellow female UFC fighter, Nina Ansaroff, who is the current strawweight champion. The pair have one child together, a daughter, who was born in 2020.

According to Celebrity Net Worth, Amanda Nunes has an estimated net worth of $4 million from her UFC career earnings.