Conor McGregor is the ultimate salesman. When the MMA fighter talks, people listen. When he fights, people watch. There's just something about the Irishman that draws fans in.

The list of highest-selling UFC pay-per-view events of all-time is littered with his name. McGregor and Khabib Nurmagomedov drew nearly 2.5 million buys and then gave fans in Las Vegas a brawl inside and outside of the ring. His boxing match against Floyd Mayweather made "The Notorious" mixed martial arts expert a cool $100 million.

McGregor has made himself and Dana White a boatload of money fighting in the Octagon over the years. It's no surprise that the 32-year-old has already built a very impressive net worth.

He "retired" in June 2020 for the third time in his UFC career after defeating Donald Cerrone in a welterweight bout at UFC 246 in January 2020. The father of two didn't really mean it that time, but he did mean it when he got down on one knee after dating his girlfriend for more than a decade. 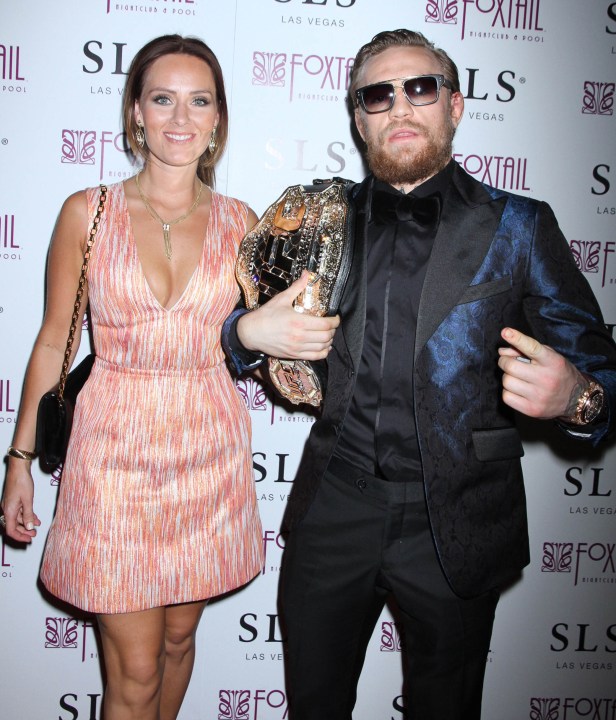 McGregor's longtime girlfriend and now fiancée is Dee Devlin. She's 33 and hails from Dublin, Ireland, like her soon-to-be-spouse. She's from Walkinstown while he's from Crumlin, according to The Sun.

The superstar UFC fighter told VIP Magazine he approached her for the first time in a club.

"I knew her a bit beforehand, but I think the first time I spoke to her properly was when I saw her in a nightclub," he told VIP Magazine in 2013. "I asked her to come over and we just started chatting. She seemed like a nice girl, and I like good girls."

The two have reportedly been an item since 2008. The Sun reported that she quit her job and joined McGregor's crew alongside head coach John Kavanagh to handle his finances among other duties.

"I definitely try to help him out all the time, even without realizing it -- especially around a fight because it's such a tough time with his weight. I cook, clean, pack his gym bag, all that kind of stuff," Devlin told ESPN in 2015.

Devlin has been by McGregor's side through the good and bad.

She's stuck with him since before he made his UFC debut in 2013 against Marcus Brimage, took down Jose Aldo in 2015 to become the UFC featherweight champion and knocked out Eddie Alvarez in New York City to earn UFC lightweight champion honors in 2016. She was even right by his side at his first UFC loss to Nate Diaz.

She's also helped him along the way with his legal trouble. He was arrested in 2019 for an altercation in Miami and the same year was charged with assault after video caught him punching a man inside an Irish pub.

McGregor Proposed With a Massive Ring

McGregor popped the question to longtime partner Dee Devlin by putting a big rock on her hand.

That engagement ring definitely came with a hefty price tag, and McGregor put men around the world to shame by flashing it off on social media.

McGregor and Devlin may have just gotten engaged, but they already shared two beautiful children.

She gave birth to their first child, Conor Jr., in 2017. Their second child, daughter Croia, was born in January 2020. They both have light hair like their dad. No tattoos yet, though.

Maybe the UFC star retired for good (or so we thought considering he's fighting Dustin Poirier at UFC 257) so he could spend more time with his future wife and two kids. It's not like the UFC is anywhere near normal given the coronavirus and COVID-related hurdles it's had to overcome. The question is will he continue to fight, and will he fight Youtuber Jake Paul, who knocked out Nate Robinson?

Either way, he's reportedly worth more than $100 million. That means the future Conor McGregor's wife Dee Devlin should be set for a long time.