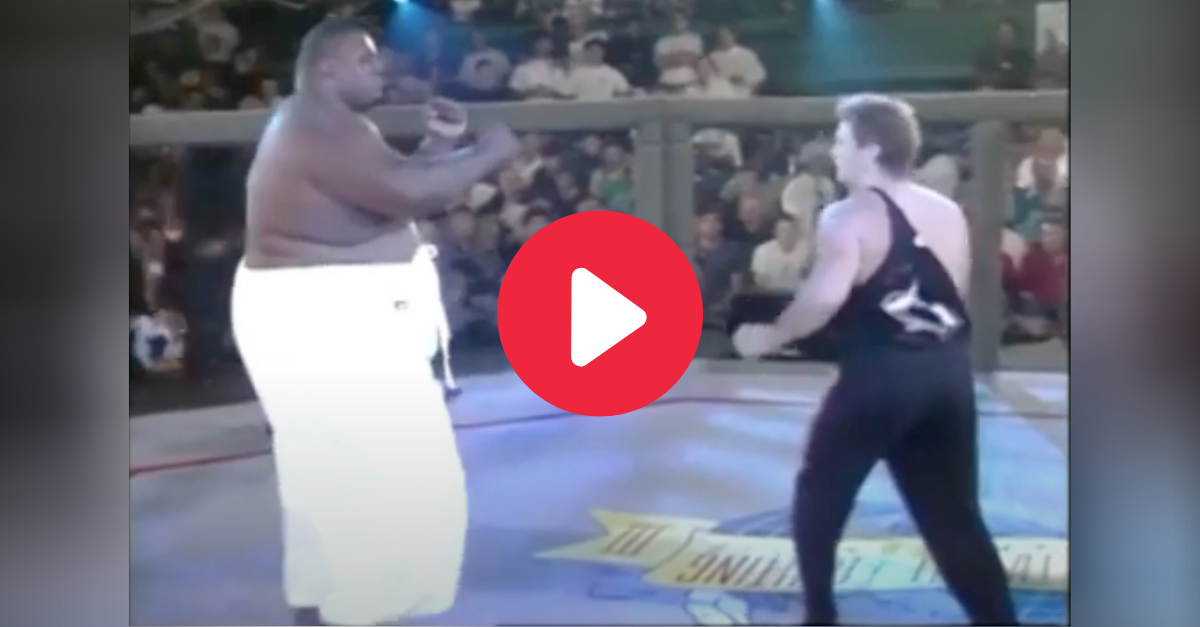 Quick, name the heaviest athlete you can think of. Baseball’s might be former New York Yankees’ C.C. Sabathia, who tipped the scales at 300 pounds. Football has a whole bunch who hover around the 400-pound mark. WWE also has some very big boys.

To find the fattest of the fattest professional athletes, you’d have to look no further than the great sport of sumo wrestling. The largest sumo wrestlers can weigh as much 650 pounds, and even that is nowhere near what Emmanuel Yarbrough weighed in at in his heyday.

At 882 pounds, the man born in Rahway, New Jersey, who some called “Manny” and others called “Tiny,” became the Guinness World Record holder for heaviest living athlete when he competed in amateur sumo. It should come as no surprise that the 6-foot-7 gargantuan also became the 1995 World Amateur Sumo Champion. He put the “heavy” in heavyweight and even made this 7-footer that Jose Canseco fought  look small.

Just a year before he became a champion, though, he took part in UFC 3 in a fight for the ages.

616 lbs Emmanuel Yarbrough became the heaviest fighter in history to compete inside the UFC. He was finished by Keith Hackney within two minutes. pic.twitter.com/sgCy2UR6ag

The Ultimate Fighting Championship was still a relatively new mixed martial arts league in 1994 when it placed Yarbrough in the UFC 3 lineup in Charlotte, North Carolina. It was brilliant. Who wouldn’t want to watch a man of Tiny’s size crush someone into itty bitty pieces?

Except that’s not what happened.

Yarbrough was pitted against Keith Hackney, a kempo representative who stood 5-foot-11 and 200 pounds. Hackney was tasked with fighting a man that weighed TRIPLE what he did.

I’m not sure anyone saw coming what happened when the two duked it out in the MMA fight.

RELATED: Jose Canseco Fought a 7-Footer And Only Lasted 77 Seconds

Hackney immediately dropped the big fella with a nasty right hook. Yarbrough impressively bounced back, however, even getting on top of his smaller foe.

In true sumo fashion, the 600-pounder then shoved Hackney through one of the octagon’s gates. When the match restarted, Hackney got to work. He delivered a flurry of punches and slayed the dragon. It looked a whole lot like David vs. Goliath.

Hackney defeated Yarbrough by TKO in just under two minutes. He earned the nickname “The Giant Killer” after the fight.

As for Yarbrough, he fought two more MMA matches. He defeated Tatsuo Nakano for Shooto in Japan. He then lost to Japanese grappler Daiju Takase for the Pride Fighting Championships.

Yarbrough actually began his sports career as an offensive tackle at Morgan State University. He quickly joined the wrestling team and became an All-American NCAA Division I and Division II wrestler in the 1980s because of his size. After that, an MMA and sumo career followed.

He also gained fame for his stature. He had a role in the 1997 Bollywood film Mr. and Mrs. Khiladi. He appeared on talk shows like Conan O’Brien and in a commercial for Motorola. He played an inmate named Clarence Seroy in the HBO drama Oz.

Yarbrough’s weight eventually caught up with him. He died at 51 from a heart attack in Richmond, Virginia. He lived a live battling food addiction and knew he had heart problems stemming from a 2007 hospital stay that revealed heart failure, according to NJ.com.

Manny Yarbrough may be gone, but he sure as heck isn’t forgotten. Here’s to one heck of a mixed martial artist and American sumo wrestler.