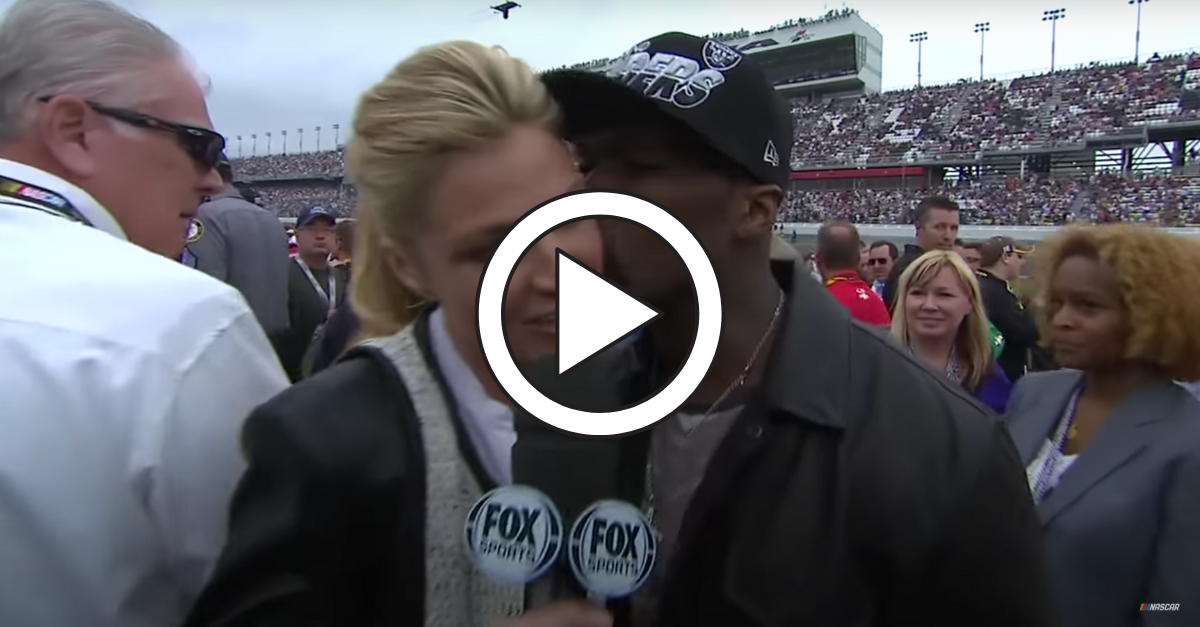 Sports reporters have a tough job. They wait on the sidelines sniffing out a story or make their way to the field for a post-game interview to question the world’s most high-profile athletes. Because they can’t possibly know their interviewee’s responses until then, it’s a very fly-by-the-seat-of-your-pants job.

Erin Andrews is a pro’s pro, though. The former ESPN employee and current Fox Sports sideline reporter has worked major events like the Super Bowl, NFL Playoffs, MLB All-Star Game, World Series and the Daytona 500. When the wacky and weird is thrown at her (like the time Richard Sherman badmouthed Michael Crabtree or when Jimmy Garoppolo hit on her after a game), she handles with class and poise. She can dish it back, too, right “old man” Aaron Rodgers?

Sometimes, though, viewers are left thinking “what in the world was that?” when she’s got the microphone in her hands after an event.

There may be no better example of that in Andrews’ career than when she found rapper 50 Cent at the 2013 Daytona 500.

After Danica Patrick‘s historic performance to earn pole position for the 2013 Daytona 500, Andrews frantically tried to find the NASCAR driver on pit road at the Daytona International Speedway in Daytona Beach, Florida.

Her hunt for the female racing star was sidetracked when she ran into 50 Cent. The rapper was there because his SMS Audio company sponsored racers Parker Kligerman and Cole Whitt.

Needless to say, their encounter was the definition of strange and cringeworthy.

Outrage began on social media after the incident. What looked to be another yet another incident of a female reporter dealing with a creepy man (does the Joe Namath-Suzy Kolber moment ring a bell?) was actually a misunderstanding, according to Andrews herself.

“It was my fault!” she told Access Hollywood in New York. “I was rushed – none of the drivers were in their spot for the Daytona 500 pit walk. They were all in the bathroom. I went and said hello [to him]. We’re actually business partners – I’m one of the spokespeople for SK Energy.”

As for the kiss itself, well, Andrews “went one way, he went the other.”

Obviously, Andrews appeared to have no time for chit chat or a smooch. She told Access Hollywood that Fox Sports producers were in her headset yelling at her to go find and interview Danica Patrick.

“They’re screaming in my ear, ‘Danica! Danica! Go get Danica!’ I whipped my neck. I made him look bad,” she said.

As for the rapper who was once shot nine times and lived to tell the story, he apparently had no remorse for how the interaction with his friend looked.

“Hey I wanted to kiss her so I did,” he wrote on Twitter.

Hey I wanted to kiss herso I did "@MeVinceG: Damn!!! @50Cent is the shit! He kissed @ErinAndrews in one of the … http://t.co/jjEahZYSiF

Jimmie Johnson ended up winning the race, and Danica Patrick finished in eighth place. But the most memorable, awkward moment that may have come from it was when two celebs teamed up for a very awkward kiss.

The worst part? She didn’t even find Danica.