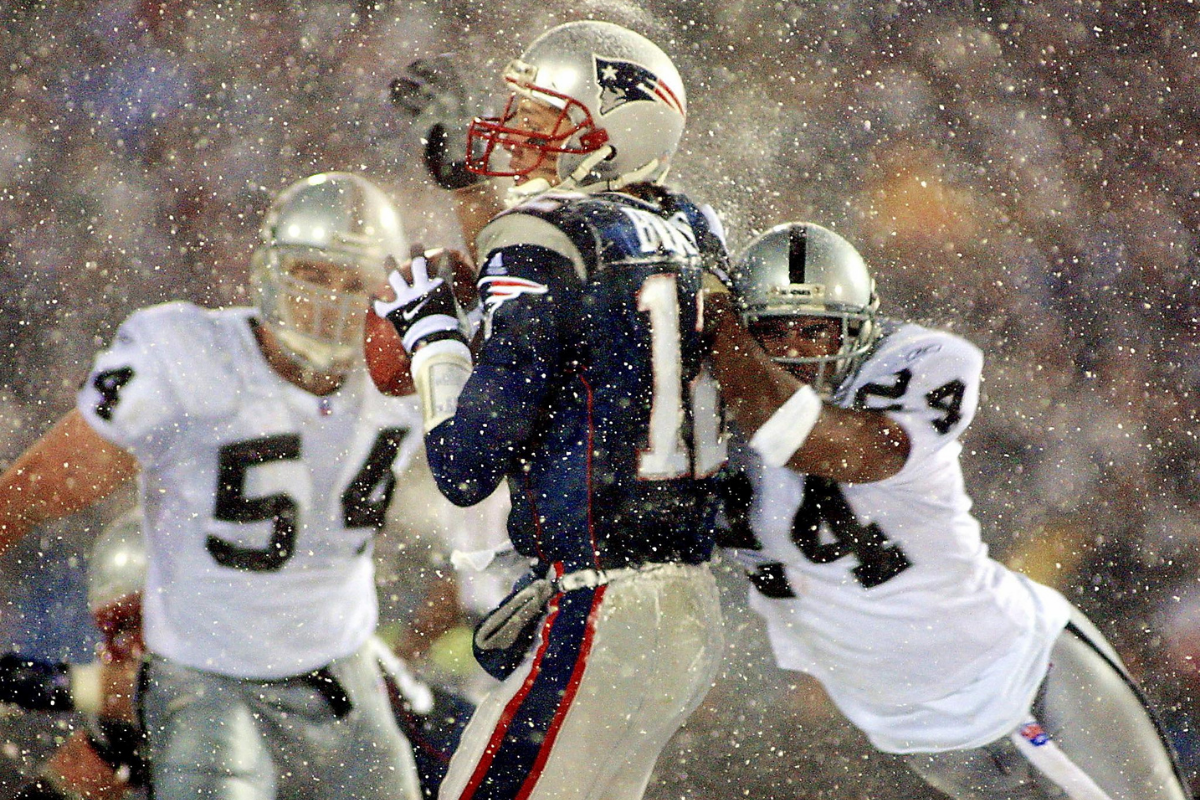 The sports world is full of powerful stories and iconic playoff moments that define each generation. With every championship team and Most Valuable Player award that is dished out, there are just as many head-scratching, controversial, split-second moments that change the course of history.

Let’s face it: we all love controversy as long as our favorite athlete or team is on the right side of history. Nothing stirs the pot quite like a good debate, and there are some points in sports history that we’ll never be able to escape. Here are the most controversial sports moments in history, and the aftermath that never should have happened.

While “Deflategate” came later in the New England Patriots dynasty, you cannot have a dynastic run without a beginning, and the infamous “Tuck Rule Game” is the flicker of light that started it all.

During the 2002 AFC Divisional Playoff game between Tom Brady‘s Patriots and the Oakland Raiders, snow was pounding Foxboro Stadium. Late in the fourth quarter, Raiders defensive back Charles Woodson clobbered Brady as he dropped the ball, which was called a fumble on the field. According to the NFL’s “Tuck Rule,” anytime a player’s arm is coming forward, the ball must first be “tucked” back into their body or else it is considered a forward pass.

Despite Brady appearing to bring the ball back to him and not throwing, referee Walt Coleman reversed the call on the field. Oakland would lose, New England advanced to the AFC Championship game, later won the Super Bowl, and the Tuck Rule was taken out of football in 2013.

In a rematch of Muhammad Ali and Sonny Liston’s first Heavyweight Championship fight in 1964, when Ali still went by his given name, Cassius Clay, the second fight in 1965 was even bigger than the first.

During the first round, Liston threw a left jab, which Ali countered with a quick right, and Liston tumbled to the canvas. When referee Jersey Joe Walcott finally managed to get Ali to a neutral corner to begin the knockdown count, both he and timekeeper Francis McDonough never seemed to get on the same page. The fight controversially ended after it was called a knockout in favor of Ali.

Many believe the fight was fixed in favor of Ali, whose “Phantom Punch” because it’s still unclear exactly how hard of a hit it was, or if it even connected at all. You can judge for yourself.

On this day in 1972, Steelers FB Franco Harris caught the "Immaculate Reception" to beat the Raiders. pic.twitter.com/nA25qB5pjP

One of the most famous plays in American football history happened in the 1972 AFC Divisional playoff game, and it is still the most controversial for a number of reasons.

With the Pittsburgh Steelers trailing the Oakland Raiders, 7-6, late in the game, quarterback Terry Bradshaw scrambled around and sent a pass toward John “Frenchy” Fuqua. Raiders safety Jack Tatum collided with the Steelers receiver, and the ball sailed backwards where Franco Harris managed to snatch the ball in mid-air and score the game-winning touchdown.

Besides being an incredible sequence of events, several questions remain unanswered: Did the football hit Fuqua or Tatum first? If it did touch Fuqua and never hit Tatum, then the play should have been over right there. Also, did Harris manage to catch the ball before it hit the ground? Video evidence is sparse, and both points are up for interpretation, but Pittsburgh has history on their side.

Raiders defensive back George Atkinson referred to the play as the “Immaculate Deception,” and some football fans will always remember it as such.

5. The Most Controversial Home Run Ever

Trailing 4-3 with two outs in the top of the ninth inning, Kansas City Royals slugger George Brett came to bat. The 13-time All-Star launched a two-run home run over the fence at Yankee Stadium to take the lead, and then the ultimate controversy began.

New York Yankees manager Billy Martin asked umpire Tim McClelland to inspect Brett’s bat. It was deemed that he used too much pine tar, which exceeded the 18-inch max from the tip of the bat handle. The home run was disallowed, Brett was called out, and the game was over. As you’d expect, George Brett exploded out of the dugout, and the Yankees would go on to win the game.

Still not satisfied, the Royals protested, and the game was replayed from the point of Brett’s controversial home run. Kansas City went on to win the rematch, 5-4.

I guess as they say, the ball don’t lie.

4. Sacramento Kings Get Hosed By Refs

A lot of people claim the NBA has fixed games in the past to help improve its product. Well, there’s no better evidence of that than Game 6 of the 2002 Western Conference Finals.

The top-seeded Chris Webber, Vlade Divac and the Sacramento Kings rolled towards a matchup with Kobe Bryant, Shaquille O’Neal and the Los Angeles Lakers. With a tightly-contested game, and the Lakers on the brink of elimination, the fourth quarter suddenly spun widely out of control.

As Washington Post columnist Mike Wilbon said, “I wrote down in my notebook six calls that were stunningly incorrect, all against Sacramento, all in the fourth quarter when the Lakers made five baskets and 21 foul shots to hold on to their championship.”

You can rewatch the final three minutes of the game and see all you need to. Do you think the game was fixed?

In the 1986 World Cup Quarterfinal, Argentina was facing England in a matchup of two of the world’s top clubs. The game was highlighted by Argentinian star Diego Maradona’s “Goal of the Century” and also the super controversial “Hand of God.”

Early in the second half, Argentina was on the attack at the top of penalty area. When a ball went into the air, Maradona, who in the replay is clearly offsides, jumps and knocks the ball into the net using his fist. Both would have disallowed the goal, but it stood nonetheless.

Trailing the Buffalo Bills with 16 seconds to go in the 2000 AFC Wild Card game, the Tennessee Titans needed a miracle with the Bills kickoff coming. That’s exactly what they got, but the result of the play is still up for debate.

Titans tight end Frank Wycheck turned right with the football. Suddenly, he pivoted at the 25-yard line and threw the football across the field to teammate Kevin Dyson. The pass appeared to travel as close to lateral as possible, but if you look closely, it certainly appears to move forward about half a yard. Even announcer Mike Patrick, as soon as Dyson caught the ball, said it appeared to be a forward pass.

Dyson raced 75 yards for the score, and Tennessee used that momentum to make the Super Bowl against the St. Louis Rams, where they would lose, coincidentally, by about half a yard.

Perfect games in baseball are rare. Of over 210,000 Major League Baseball games in history, only 23 of them have ever finished with no hits, no walks, and 27-straight outs. Detroit Tigers pitcher Armando Gallaraga had one brewing against the Cleveland Indians on June 2, 2010, until first base umpire Jim Joyce appeared.

With two outs in the top of the ninth inning, a ground ball was hit to the right side of the infield. Gallaraga sprinted to cover first base, caught the throw from first baseman Miguel Cabrera, and stepped on the bag to complete the perfect game. But Joyce, who had the best seat in the house, called the runner safe despite the throw beating him, and the perfect game, and no-hitter, was no more.

Later, Joyce admitted that he got the call wrong. The next day, Gallaraga delivered the Tigers starting lineup to Joyce at home plate, where the two shook hands in a warm reception.

Just like Jim Joyce’s botched call, some of the most controversial moments in sports history can be brushed aside. Others are going to hang around forever in the hearts and mind of sports fans who saw what exactly happened, but the history books will never forget.