I was excited about going to see my Boston Celtics on opening night. They overachieved last year. Truthfully, they had no business whatsoever competing with the Warriors for what could have been Banner 18. But the fact of the matter is, this organization is legendary. And part of the reason for that is the man who Jaylen Brown called "the greatest".

Bill Russell passed away this past summer. In his wake, he left a legacy that nobody in the game will ever manage to match. The NBA's Secretary of Defense joined the Celtics in 1956. Number 6 then brought home his first championship in 1957. That was just the beginning of a career for the ages. 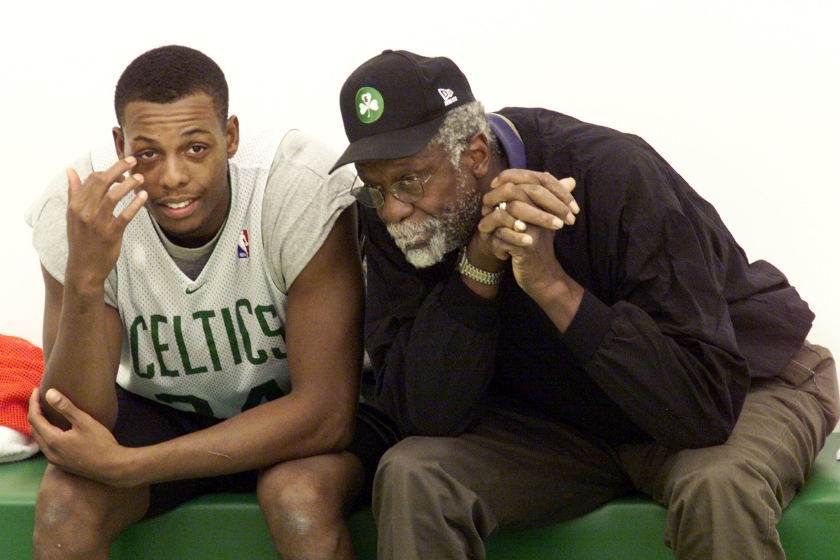 The first of Russell's championships wasn't followed up by another in '58. But after his gap year, Russell helped raise banners in Boston for eight straight years and in the last year of that run, he moved into being a player/coach. When all was said and done, Bill Russell won 11 championships. In the midst of that span, he came away with 12 all-star appearances, five MVPs, three time All-NBA first team, eight time All-NBA second team, four time rebounding champion, and much more.

Russell's No. 6 was retired not just by the Boston Celtics, but by every NBA team. His leadership was something that everyone in the game still points to, despite his playing career ending before the 70s. Doc Rivers has said that Bill, as well as other Celtics legends, were just as excited about the 2008 Championship as they were. Russell found a way to stay with the team, to be a mentor, and remind players who walked out onto that parquet floor that they were part of something special.

And for all he did on the court, Russell also managed to transcend the game with his work off the court - while making sure he was a model for that work as well.

A Civil Rights Icon On and Off the Court 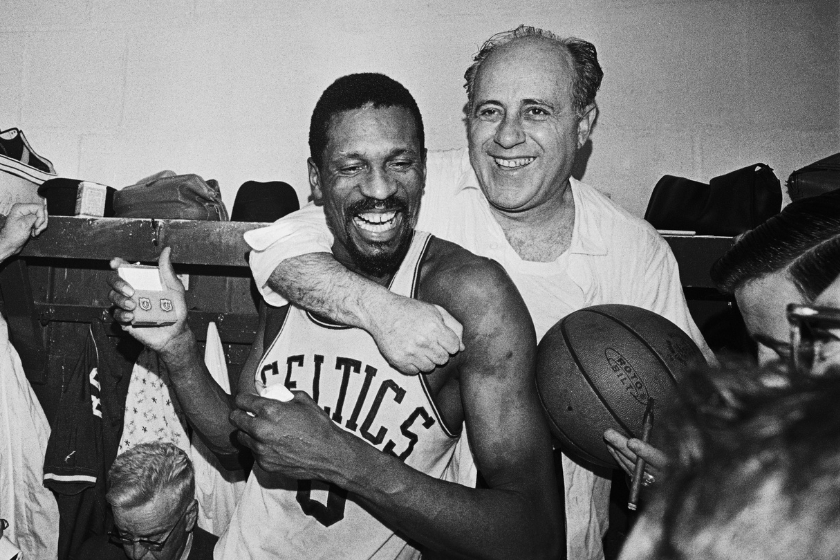 As the first Black coach in the NBA, he won three championships. He also was part of the first ever all Black starting five in NBA history. That would be a feat anywhere in this country, but doing so in a place with the racist rhetoric that gets spewed in Boston still to this day is even more impressive.  He was a trailblazer who helped to break basketball's color barrier while advocating for equality in a post-World War II America. And that must have been a difficult thing to do when moving to Boston in the mid-1950s.

He led a players protest in Lexington, Kentucky and stood beside the likes of Muhammad Ali and Martin Luther King, Jr. He was a critical part of the Cleveland Summit, which saw Russell, Ali, and other prominent Black athletes such as Kareem Abdul-Jabbar and Jim Brown. In a time during which Jim Crow marginalized the Black community, these men stood up for what was right, and had enough respect of people across the sport who stepped aside when they took their opportunity to speak up.

Laying a Legend to Rest 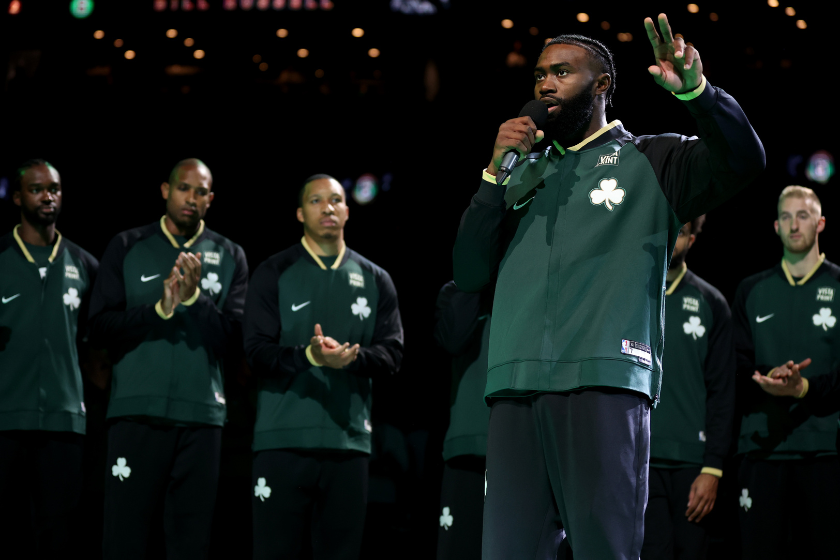 The Celtics put together one heck of a tribute to their fallen hero on opening night. After warmups, the entire Celtics team stood in formation, in their new City edition Jerseys that honor Russell, and Jaylen Brown took the microphone. "Bill Russell was a great man." A simple statement, but one that rings more true than is seemingly possible. After talking about his nobility and the respect he garnished through his life, Jaylen then ended with "Bill Russell was the greatest man."

After ceding the mic, a light came up on the opposite end of the court, in the paint on Boston poet laureate Porsha Olayiwola. She gave a rousing performance that touched upon Russell's greatness. "Legend has it: Nobody hooped like Bill Russell, Lord of the Rings, defender of the scoreboard." She went on to talk about his work, "He bodied anybody willing to sacrifice their body. Bodyguard, center-guard, on and off the court, in and out the city." When Olayiwola called him "king", the Garden cheered as we wiped away our tears.

When her moment came to an end, a fitting tribute started rolling across the video screens and out from it emerged a performance from Aloe Blacc that made us believe in the message that Bill stood for.

For about 10 minutes the TD Garden almost forgot there was a game to play.

The C's Rising to the Occasion 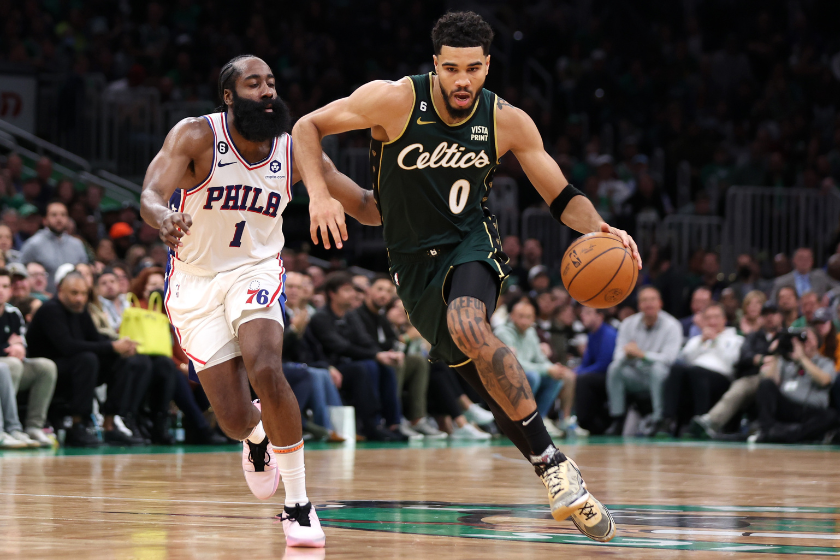 The number six was in the paint on both sides of the floor for the night. And the Celtics wore their newly revealed City Edition jerseys. But these jerseys weren't the wretched attempt at resembling a banner like last season. The angled cursive Celtics emblazoned across the front with an offset number. A subtle number six sat both above the Nike swoosh on the shirt and on the belt loop of the shorts. Gold trim detailed the Celtics Golden Era of which Russell was a part. And the six on the shorts, as well as the side of stripe of the uniforms, paid homage to the 11 championships Bill Russell won in his 13 seasons in Boston.

Fashion aside, these Celtics put in a performance fitting of the "king" himself. For the first time since 1969, which was also the the final year of Russell's playing career, a pair of teammates recorded 35+ points in their team's first game of the season. Of course, in 1969 it was Wilt Chamberlain and Jerry West doing it for the Lakers. At the Garden it was Jayson Tatum and Jaylen Brown.

An emotional moment for Bill Russell?s wife, Jeannine, as Celtics fans give her a standing ovation pic.twitter.com/7YJ3Q8f9oL

In a contentious game that saw some hard fouls and poor officiating, the Celtics' star duo truly rose to the occasion of the night. While the game wasn't easy, the Cs really felt in control for probably 70% of the game. They saw the debuts of Malcom Brogdon, Blake Griffin, and Massachusetts native Noah Vonleh. Al Horford pumped up the crowd. Marcus Smart played up to his last name. And the team never lost their head. And they did so against a team that is likely to finish in the top four of the Eastern Conference. The 76ers are no slouch.

And while I'm sure there were emotions running high due to the gravity of the night, there's a lot of promise I saw in this team for the coming season. Proof in and of itself that Bill Russell's legacy lives on. As Olayiwola preached, "the story goes: he has more rings than fingers, more wrists to flick than what makes sense."

Bill Russell was a great man.

MORE: Bill Russell Refused to Accept His Hall of Fame Ring for 44 Years. Here's Why.