It was my first professional championship sporting event in the United States and it only cost me $24 dollars to get in.

Plus, the game was in Vegas, baby. How could I say no?

I've never been to a WNBA game before but considering the only other championship match I attended was Gaelic Hurling in Ireland, I felt like a chance to see two teams at the pinnacle of their professional sport couldn't be missed.

The Blindspot for Basketball Fans 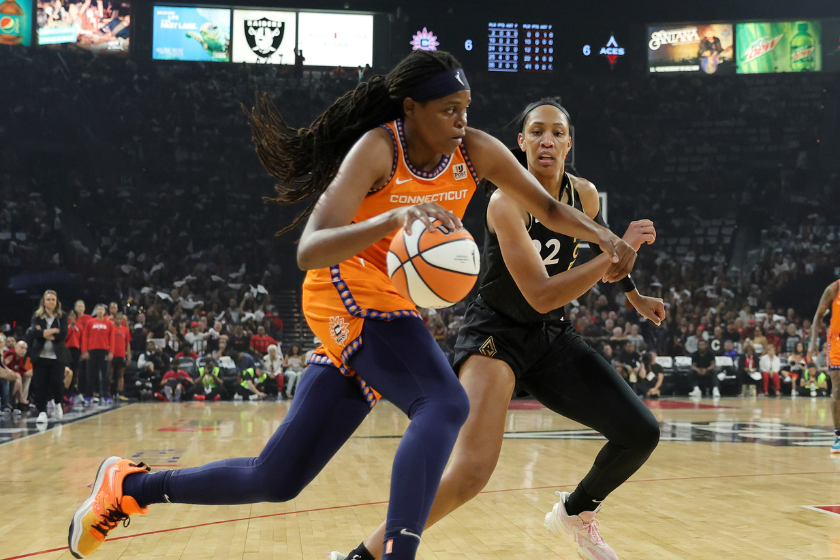 I'm a basketball fan. I love the athleticism, the strategy, and the tension in the critical moments down the stretch of a tight game. But like most Americans, I never allowed the universal characteristics I liked about basketball to translate to me watching the WNBA. I needed more than just Xs and Os to make me invested. I was captivated by the drama and passion surrounding the skills on the court that the NBA offered and the WNBA didn't. NBA fans were living and dying with free agency additions, injuries and how to build out the roster so the third guy off the bench can help you win a title. The game of basketball got me to watch, but the culture of the NBA is what I had been swept up in my whole life. The WNBA seemed to be lacking that.

In high school we had a great girls basketball team, which won several state titles over the years. I had a great time attending those games, but it's always a little different when it's a small town and you have friends on the team. You're going for more than just the play on the court, it's a community event.

I went to college at the University of South Carolina, which over the past ten years has built its women's basketball program into an powerhouse capped by winning NCAA tournament titles in 2017, when the team was led by Las Vegas Aces star and two-time WNBA MVP A'ja Wilson and in 2022 when Aliyah Boston's revenge tour took down Paige Bueckers and the UConn Huskies.

I didn't attend a single game when I was there.

In my defense, the program wasn't where it was at now. It was already halfway through my time at USC when the school hired Women's Basketball Hall of Famer Dawn Staley to coach the team, a decision that would ultimately transform the program and launch it to the top of the national stage.

But it wasn't just the lack of winning that caused me not to attend women's games in college, there was no community energy around those contests. I didn't have friends on the team or in the stands like those games in high school, and the quality of play had yet to captivate the community in Columbia, South Carolina. So I stayed away.

After I graduated college, the Gamecocks signed A'ja Wilson, one of the top high school female basketball recruits in the country. That got my attention. I would watch their tournament games on TV, especially when they won it all in 2017, but I wouldn't say I was invested.

It was actually something away from the court years later that made me take notice. Wilson had moved on to become a WNBA star and league MVP. I was working for a national news station when the University of South Carolina was unveiling a statue of A'ja Wilson on campus. Wilson made headlines with her speech at the event, when she acknowledged how special it was that she had a statue on the very same campus her grandmother wasn't even allowed to walk on as a child because she was black.

Later, my network interviewed Coach Staley and it became clear to me after those two events, that the community impact and passion surrounding the game on the court had blossomed in South Carolina. At that point I decided to become a true Gamecocks Women's basketball fan, years after I had left the campus.

This brings us back to tonight in Las Vegas, Nevada. The Las Vegas Aces along with starting forward A'ja Wilson (freshly off her second MVP) are taking on the Connecticut Sun in Game 2 of the WNBA finals and I just happened to be in town.

I have a theory going, that Las Vegas is the best live sports town in America.

(The second part of this theory is that the Chargers are the dumbest ownership group in sports for letting the Raiders set up in Vegas, while they chose to be football team number two in LA, but that's a story for another article). 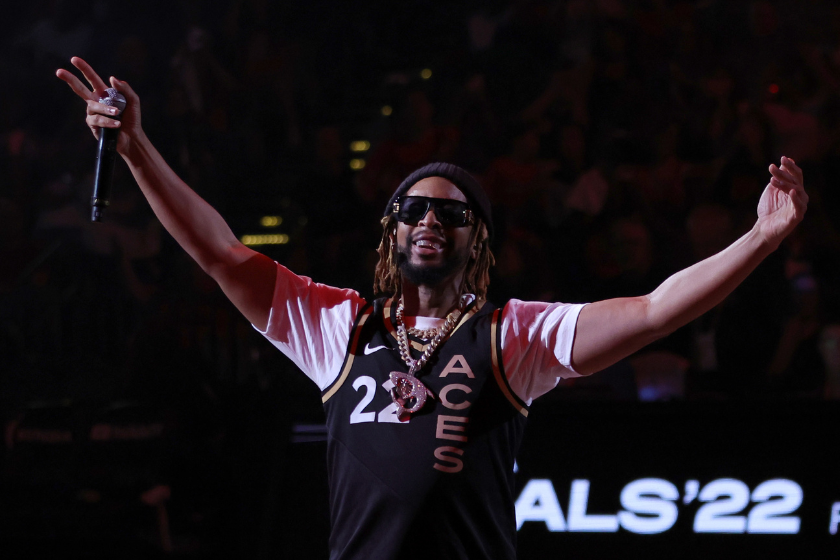 Las Vegas is a sports town. The crazy pregame shows and fanfare around Vegas Golden Knights hockey games have made them one of the hottest tickets in the NHL. The new stadium, quality of the team, and that special Vegas air of debauchery during the tailgates has made Raiders tickets some of the most coveted and expensive in the NFL. Even LeBron says he hopes to become owner of an expansion NBA team based in Vegas.

These things are not a coincidence to me, and after spending much of the summer in Sin City playing in the World Series of Poker, I know how passionate this town gets about hosting a competition. But I needed to see a Vegas sporting event myself to learn if my theory was real.

The day of the game I stopped by the enormous Westgate Superbook in Vegas and placed a small wager, because to truly embrace and understand the full Vegas experience, one should gamble on the game. When in Rome. A'ja Wilson over 10.5 rebounds.

To understand what this Vegas game was like we have to start with the scene- first off, it was INSIDE A CASINO. The arena is in the Mandalay Bay and the folks I was going with have a rewards card that allows them free valet parking. A sporting event with zero issues with public transportation or parking? Sign me up.

As we walked through the casino toward the entrance to the game with thousands of excited fans I was genuinely impressed with the energy. I guess I was expecting a crowd of primarily families with younger daughters. While there were kids in the crowd, it was predominantly rowdy locals ready to yell their heads off to root for a championship for their city. Most think of Las Vegas as a town of tourists, but when you go to an event like this, you see the pride locals have for their city.

As we got to the entrance of the event, they had a station where you could take your current beverage and pour it into a plastic cup and take it into the game at no charge. A sporting event allowing outside beverages instead of eviscerating their fans with insanely overpriced concession beers... What!? So here I am breezing through the security lines while sipping my drink, instead of my classic move of chugging it outside the gate like the financially responsible man I am... Is this what heaven is like?

We get to our seats complete with complimentary Aces towels to whip above our heads and you can feel the energy in the crowd. Several NBA players like Jam Morant are sitting courtside, along with some members of the Golden Knights hockey team. The Aces have a bunny mascot named Buckets dunking off a trampoline. The show is on and the crowd is into it.

After the opening tip, I found myself captivated by the game on the floor. I know this was the case because I was mumbling coaching adjustments I would make out loud and pointing out players "mistakes" like I do when I'm irrationally invested in any sporting event. This is a good sign.

The game was incredibly fluid and the quality of shot making impressed me, with both teams starting out hot. Several moves brought myself and the sold out arena to our feet. There wasn't even a stoppage until 3 minutes remained in the opening quarter and only one foul had been committed up to that point. This is unheard of in an NBA game.

The contest was tight early but the Aces were able to grab an 8-point lead heading into the half. A'ja Wilson was dominating the game offensively but she wasn't grabbing as many rebounds as our bet would have liked. However, I was incredibly invested and celebrating fanatically for each one she did pull in.

Come for the Game, Stay for the Fun 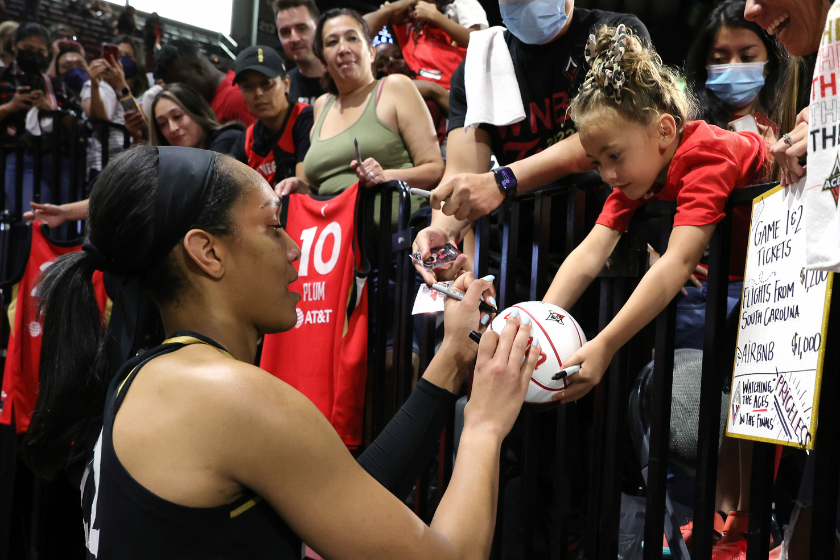 Half-time was another event, because rapper Lil Jon performed. So this $24 dollar ticket comes with a  Lil Jon bar mitzvah-style medley performed at halftime? Complete with pyrotechnics and fog machines? OKKKKKKKAYYYYYY. YEEEEEAAAAAHHHH.  I found myself standing up and breaking it down from the window to the wall like I was at a teen dance in 2004. Electric stuff.

The third quarter started and the Aces began to stretch their lead. They were making tons of contested shots and the Sun had no answer for Wilson. She started to pull in some rebounds too, so we were getting a sweat with our bet, and that's all you can ask for as a gambler.

By the fourth quarter, the Aces had pushed the lead to 20 following an incredible 3-pointer plus the foul. The crowd was going off and it was hard not to get swept up in it. I was seeing the passion surrounding the game on the court. What I thought (and still think in other cities) that the WNBA has been missing was right in front of me here in Vegas.

As the clock ticks down close to the final two minutes, it's clear the Aces are going to take a 2-0 lead in this best of 5 WNBA finals. A'ja Wilson just pulled down her tenth rebound (seventh of the second half, I believe) and I am standing and yelling because I only need one more to win my bet. Then I see Aces Coach Becky Hammon motion to clear the bench. The crowd is cheering, congratulating the starters as they prepare to leave the game. I am yelling equally as loud, pleading to the Gambling Gods to please just leave them in for the final minute or two. It's a fruitless endeavor and I know this possession is our last chance. I need one more Wilson offensive rebound and I need it right here.

One of the Aces guards settled into a difficult long jumpshot. It's the kind of shot an MVP forward knows they have a great chance at rebounding if it misses. The crowd is on their feet as the ball is in the air, cheering for it to go in. I am also on my feet cheering for the opposite outcome, and in my head, I am on my knees praying for a very specific missed shot in a very specific direction. The ball careens off the rim and as I see Wilson preparing to leap for the rebound I can feel my heart in my throat and my financial victory within her reach. Just then, a Sun player jumps in front of her and snatches it from the grasp of both Wilson and myself.

I fall to my seat as the referee signals for a stoppage and the crowd cheers Wilson and the rest of the Aces starters to the sideline. They are one win away from a championship. I am silent for a few seconds with the knowledge the bet is lost.

Then, I stood back up on my feet, smiled and started to cheer with the thousands in attendance. What a rush. What more could I ask for. You win this time Vegas. But I certainly didn't lose. I got everything I asked for and more. And I'll be back.

MORE: The WNBA is Setting Itself Up for a Viewership Disaster