We're barely three weeks into the NBA season, and the Brooklyn Nets have been nothing short of a circus. Where to begin? Kyrie Irving brewing tension over his refusal to get a COVID-19 vaccine last season? James Harden then forcing his way out? Kevin Durant asking owner Joe Tsai to fire Steve Nash and Sean Marks? Kyrie's tweet about an antisemitic movie? His drawn-out apology? Firing Nash? Being on the cusp of hiring former Boston Celtics coach Ime Udoka, who's in the middle of scandal involving a Celtics female staff member?

With all that behind them (sort of), the Nets have begun to turn a new page by hiring Jacque Vaughn as their head coach. Vaughn has been an assistant coach in Brooklyn for the past seven seasons and has seen the franchise go from a scrappy playoff squad in 2019 to mess they are now. In the middle of it, he coached the Nets to a playoff berth in the NBA Bubble in Orlando in 2020.

Of course, the benefit of hindsight makes things clearer, but Vaughn should've gotten the job before Nash was even considered.

Jacque Vaughn Should've Been the Nets Head Coach After the Bubble 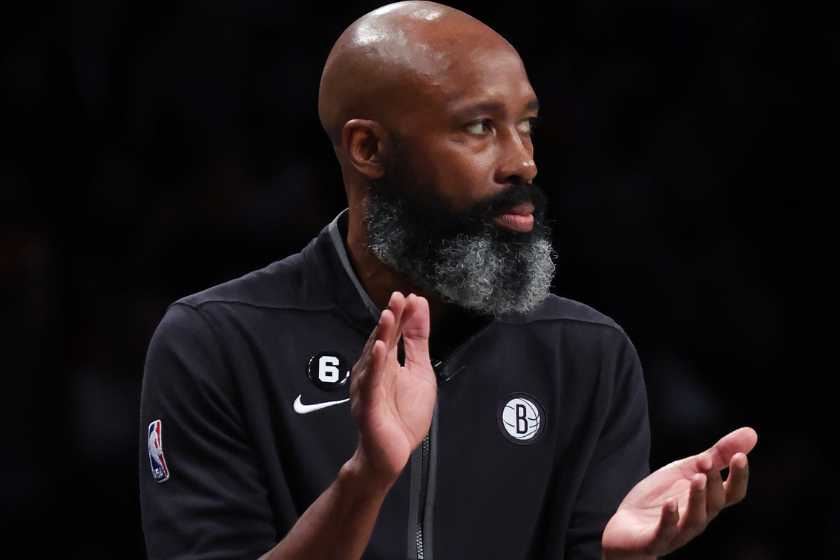 RELATED: For Kyrie Irving, "Sorry" Seemed to be the Hardest Word

When Kenny Atkinson abruptly stepped down as Brooklyn's coach days before the world shut down in March 2020, Vaughn was called up to the front of the bench. He led the team to a 7-3 record, including a win over the Los Angeles Lakers the night prior to the league canceling the season.

The Nets looked like a cohesive unit once the season resumed in Orlando, even without Irving and Durant. They went 5-3 in regular season games, which is impressive considering they signed six guys off the street to fill out the roster before the Bubble. However, they were swept by the Toronto Raptors in the first round of the playoffs.

So, Vaughn proved he could rally the troops in a short period of time, but Sean Marks hired Steve Nash--the personal choice of Irving and Durant--for the full-time job. I don't blame Marks. Most GMs would make a move in collaboration with their franchise stars, but Nash was a curious hire. For one, he had zero coaching experience and it was as clear as day Irving and Durant wanted him because he would be the figure head while they ran the show. Irving even said as much.

That being said, Marks should've found a middle ground. First-time coaches rarely work out--an exception being Golden State Warriors head coach Steve Kerr, but he had experience as the general manager of the Phoenix Suns--and Nash was supposed to know how to lead this superstar roster to a championship? Right.

Meanwhile, Vaughn remained on Nash's staff as an assistant and took over as the interim coach when Nash was let go. Thankfully, the Nets avoided Ime Udoka and all his baggage and hired Vaughn permanently on November 9th. Under Vaughn, they've looked like a completely different team.

The most drastic change is on the defensive end. Brooklyn was dead last in defensive efficiency in the seven games under Nash this season. In the five games since, they're No. 1 and have only given up over 100 points once so far--and that was to the Chicago Bulls in the immediate aftermath of Nash's firing. This is a tell tale result because they're reportedly running the same defensive system as they did under Nash, but Vaughn has the guys bought in. Also, Kevin Durant is going off, and the team is moving the ball well.

I have to explore some revisionist history here, though. What if the Nets had hired Vaughn instead Nash back in 2020? It's difficult to predict if they would've lived up to their championship potential because there are so many other variables to account for, but the team has responded to his leadership on two separate occasions. This isn't a slight against Nash. He was in over his head, and Vaughn has 12 years of NBA coaching experience on him. That's huge! And he spent the first two years learning under San Antonio Spurs great Gregg Popovich.

Coaching experience matters in professional sports, and there are several examples in the NBA. Joe Mazzulla stepped up to the plate for the Boston Celtics in lieu of the Udoka situation, and they haven't missed a beat. His background? Five years as a college basketball assistant coach and three years on the Celtics staff. Utah Jazz head coach Will Hardy has his team playing great basketball--albeit to the chagrin of Jazz fans hoping to tank for Victor Wembanyama. His experience? Six years on the Spurs staff and one year in Boston. Erik Spoelstra spent 10 years working his way up the Miami Heat ranks until he was named head coach in 2008.

If romantic comedies have taught us anything, it's that the answer has been in front of us the entire time. It's a small sample size to determine if Vaughn is the long term answer for the Nets, but the results have been promising.

MORE: Luka Doncic is Beginning to Look Like the Next James Harden, but Better