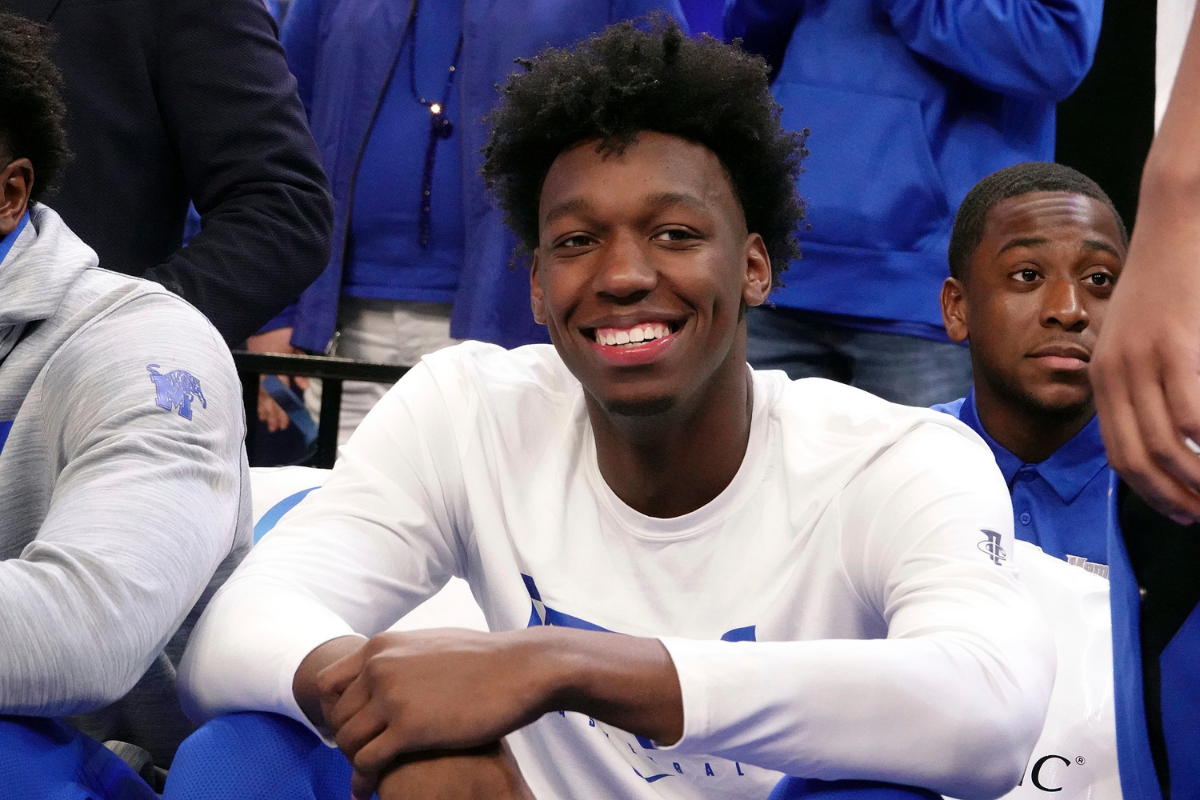 As a high school senior in 2019, James Wiseman looked anything but. A top recruit who stands 7-foot-1, Wiseman combines his stature with athleticism and a skilled game. It drew the attention of several elite college basketball programs.

That much attention at such a young age results in pressure. James had a rock in his corner.

We the Wiseman family thank each and every one of you all for the Love 💕 and Support you all are showing us!! Thanks we Love 💕 you all 💕.#GTG🐅⁦@BigTicket_JW⁩ ⁦@_JaquaRiUS_⁩ . pic.twitter.com/FWHzBUxNNU

Donzaleigh Artis wanted her son to enjoy being a kid.

Artis was more concerned with her son going to prom, making friends, and getting into shenanigans. Basketball could wait. Youth is finite.

Artis elaborated on the sentiment in an interview with Memphis’ 92.9 FM in 2018:

?The one thing I?ve learned about life is life?s not promised,? Artis said. ?I want James to be able to say, one thing I was able to do in life was be a kid. I got to laugh. I got to be silly, jump around, play. I want him to experience that because once he decides to go to college and the NBA, no more playing. We?re in a grown man?s world now. I want him to enjoy life.?

Basketball has always been prevalent in Wiseman’s life. He started showing signs of his potential in eighth grade as a versatile frontcourt player under AAU coach Don Wynn. He grew up in Nashville, Tennessee and attracted the attention of the St. Louis based Bradley Beal Elite AAU basketball team. He later played for Team Penny, an AAU and Nike EYBL circuit team based in Memphis and sponsored by former NBA star Penny Hardaway.

The young center played his first two years of prep ball at The Ensworth School, a private school in Nashville. He then moved to Memphis and transferred to Memphis East High School, where head coach Penny Hardaway led the team.

The transfer rose eligibility questions from the Tennessee Secondary School Athletic Association (TSSAA), which has a “coaching link” rule designed to prevent recruitment of athletes from one school to another, according to ESPN. The TSSAA suspended Wiseman and teammate Ryan Boyce in November 2017. The ruling was overturned by the Shelby County chancellor.

The Mustangs won the state championship in Wiseman’s junior year. Hardaway left East High to take over for Tubby Smith as the University of Memphis coach in 2018.

A five-star player, Wiseman had his pick of the litter when it came to colleges ?including Kentucky, North Carolina, Kansas, Alabama, and Memphis. Widely expected to attend UK and play for John Calipari, Wiseman chose to stay home and suit up for the Memphis Tigers.

RELATED: Thanks to NCAA, James Wiseman?s College Career Ended Before It Really Started

Going into the 2019-20 season, the Tigers had the No. 1-ranked recruiting class in the country. Hopes were high for a deep NCAA Tournament run.

Wiseman’s college career was over almost as fast as it started. It was discovered that Hardaway fronted $11,500 in moving expenses to help Wiseman migrate to Memphis in 2017. Because Hardaway, a UM alum, donated $1 million to the school in 2008, he was was deemed a Memphis booster; thus making the moving expenses a violation of NCAA rules.

The Shelby County Court granted the center a temporary restraining order against the NCAA that made him eligible while the case was ironed out. Ultimately, he was handed a 12-game suspension if he donated $11,500 to a charity of his choice.

Wiseman played his final college game against Oregon on November 12, 2019. He served seven games of the suspension, and announced he was leaving school to prepare for the NBA Draft.

Wiseman is a top-tier prospect. He’s projected to be selected in the first three picks. Due to his early departure from Memphis and the coronavirus pandemic/COVID-19 outbreak, it will be over a year since he last played a competitive game.

We weren’t able to see much of Wiseman at Memphis, but his build, rim-running abilities, and shot creation have the makings of a modern NBA big man. He’s drawn comparisons to Chris Bosh for his tall, lean frame and southpaw jumper.

Thanks to his mom, Wiseman has a loving support system and a cherished childhood.

He’s ready for the grown-up game.