Oscar Robertson. Michael Jordan. James Harden. Washington Wizards guard Bradley Beal. These are the only NBA players to average at least 30.5 points, 6.1 assists, 4.2 rebounds, and post a 57.9 true-shooting percentage in a season. And if your memory gets foggy, just know that Kamiah Adams-Beal, Bradley Beal's wife, won't let you forget her husband.

Adams shared a pic of the All-World plaque she made for NBA All-Star significant other after he wasn't named to a 2019-20 All-NBA team.

James Harden and Dallas Mavericks phenom Luka Doncic took the guard spots on the first team; Chris Paul and Damian Lillard made the second team; and Russell Westbrook and Ben Simmons of the Philadelphia 76ers held down the third team.

The is one example of the shooting guard's wife having her husband's back. She's ride or die. 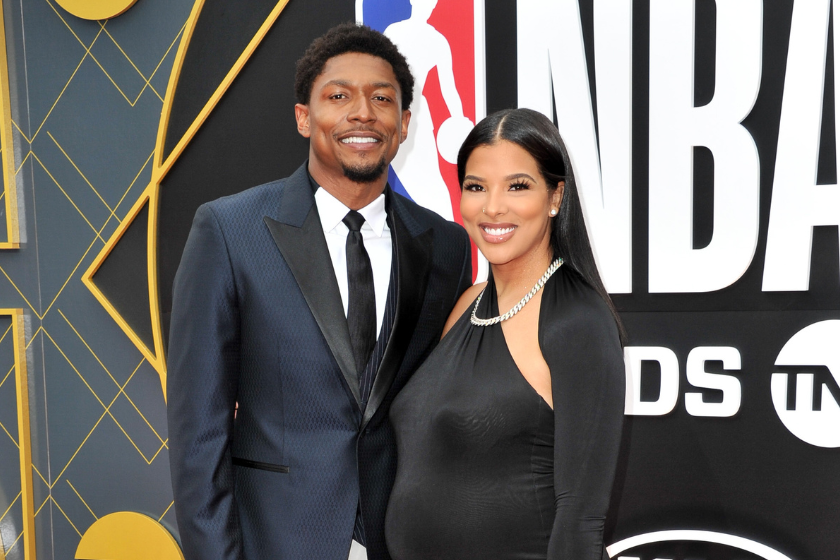 Adams, born in Brussels, Belgium, to Jeremiah and Karina Adams, was raised in Compton and went to college at Cerritos College in Norwalk, California. She has two younger sisters, namely Paige and Kennedy Greens.

They hit it off. Their first date was at an amusement park in Las Vegas. In January 2020, a professional basketball player popped the question.

The third pick in the 2012 NBA Draft and Adams tied the knot at some point last year, but the ceremony was postponed due to the COVID-19 pandemic.

Per Bleacher Report, the Beals sold their house in Mclean, Virginia and purchased a property in Venice, California in September 2020.

Following the move, rumors circulated among Lakers fans about a potential trade for Beal that would team him up with LeBron James and Anthony Davis.

Kamiah reacted to Snoop Dogg and Shannon Sharpe's trade discussion on Fox Sports' Undisputed. Beal signed a two-year, $72 million extension with Washington in October 2019 and remains a member of the D.C. team, re-upping after the second season to a five-year, $251,019,650 contract.

I say read as far into real estate purchases as possible. Like college football fans tracking flights, it's the only logical way to speculate new additions.

Bradley Beal explains why Kent Bazemore's comments irritated him so much. (Via @firsttake) pic.twitter.com/aTaueNznQB

"Forty-nine points in 29 minutes, though, that's unreal," Bazemore said, referring to Curry's output in a win over the visiting Oklahoma City Thunder on [May 8]. "Then we got guys hurting hamstrings, trying to keep up. So, ya'll gotta do some research on that."

The trending news sparked the Wizards star to go after Bazemore on Twitter. Mrs. Beal chimed in, too.

I?m mad we even giving relevancy to someone most people didn?t even know was still in the league.

The argument was entertaining but all for naught. Steph ended up taking the scoring crown with a 32.0 points per game average. To add insult to injury, Bazemore's now out of the league and Beal's still racking up points.

Kamiah's confidence reflects her husband's on the court. She's someone you want in your corner. Luckily for Beal, he knows his wife will be cheering him on, whether he's in the playoffs, battling for an MVP award, or even just spending time with his kids.

This article was originally published on October 16, 2020, and has been updated since.