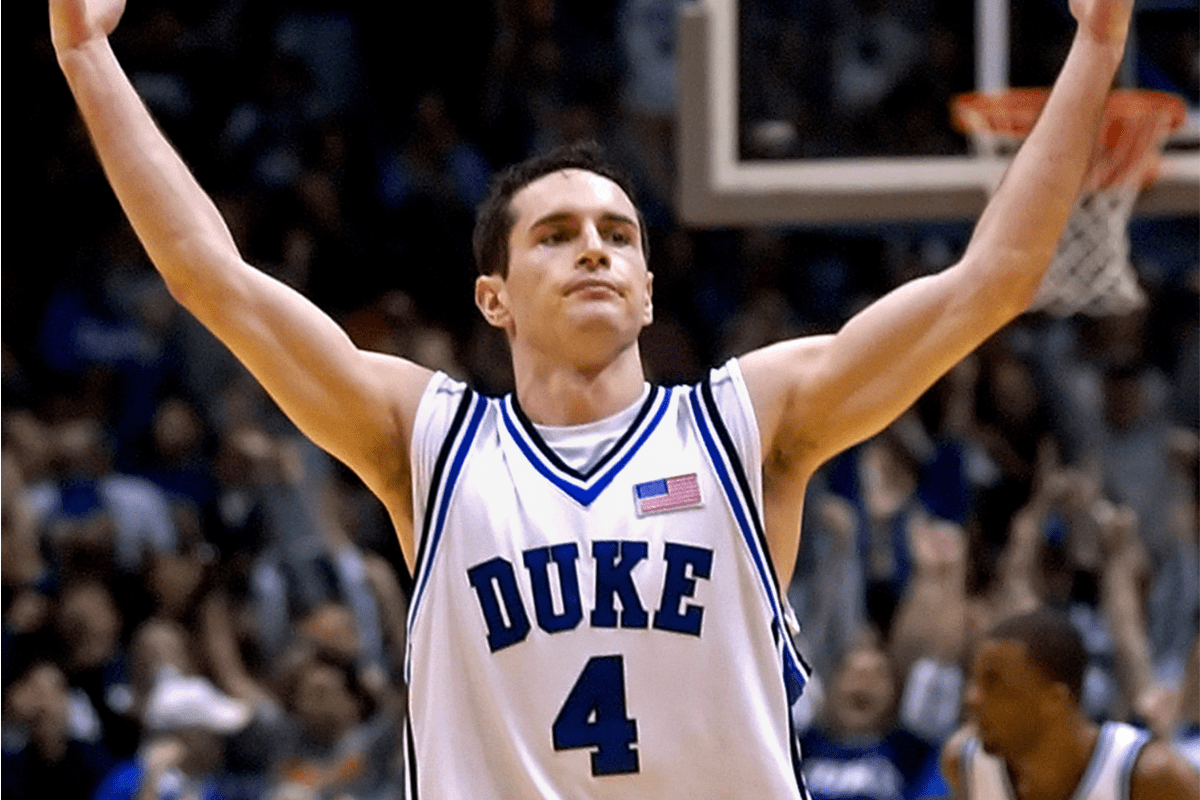 In Omaha, Nebraska, a group of fourth grade kids had a choice.

Which shade of blue would you choose?

Come winter, with the days of Nebraska Cornhuskers football dwindling, battle lines were drawn. On one side, a ram, and sky blue. The other, a blue devil, and royal blue.

Thousands of miles from central North Carolina, this was the biggest choice of my 10-year old life other than deciding when to pick my nose. I turned on a Duke game.

A guy with a messy haircut, three-quarter length t-shirt, sporting No. 4, running around the court like a dog chasing cars, shot the lights out.

RELATED: Is Larry Bird the Most Valuable College Player Ever?

JJ Redick, a lifelong Duke fan, committed to play for head coach Mike Krzyzewski early in high school. In his four years in Durham, the shooting guard had himself a career for the ages:

On top of all his accolades, J.J. inspired Redick Range. Redick Range was any 3-point shot not directly toeing the arc that you heaved to impress Jenny from across the street. The key is shooting a wink and holding the follow through.

The Duke basketball player was a sniper, shooting a career mark of 40.6 percent from beyond the arc. From the free throw line, he shot a career 91.2 percent, finishing 0.1 points behind Villanova guard Gary Buchanan’s then record of 91.3 percent.

His deepest NCAA Tournament run came as a sophomore, when Duke fell to eventual national champion UConn 79-78 in the 2004 Final Four. However, the Blue Devils did have postseason success in his tenure, winning the ACC Tournament three times.

Redick became Duke’s all-time leading scorer on February 19, 2006 with a corner 3-point field goal against Miami. He finished his career with 2,769 points. He scored in double-figures every game of his senior season. He steadily increased his points per game every year, finishing with a 19.9 ppg. career average.

Redick fell to Larry Bird in the second-round of the ESPN College Basketball Greatest of All Time Bracket in March 2020. He was the 11th overall pick in the 2006 NBA Draft by the Orlando Magic.

The perfect recipe for a hated college basketball player: play for Duke, be a white guy, be really good, be animated, and stay all four years.

JJ Redick checked all those boxes. On the road, he was on the receiving end of ruthless hecklers. Just ask NC State, Tennessee, Virginia Tech, Baylor, Indiana, Kansas, or Wake Forest fans, and Redick will almost surely be public enemy No. 1. Notoriously, UNC and Maryland fans loved the guy.

The pressure, scrutiny, and inescapable expectations made Redick question his basketball future. He expanded on a meeting with his sisters during his sophomore year on the Pardon My Take podcast, according to Chris Bengel of CBS Sports:

“December of that year, I had my sisters meet me on campus, and they came over for dinner, and I was like ‘I don’t want to play anymore, this is not for me, it’s not fun.’ I really struggled those first two years ? it was really hard for me,” he said.

Redick played into the villain role so many people bestowed upon him. It was a way to cope, but didn’t alleviate the mental toll. He continued:

“It f—ed me up,” Redick said. “It forced me to take on a persona that was not me. There are not too many 18-year-old, 19-year-old kids who are really comfortable with who they are. You’re still at the point in your life where you are trying to figure things out. Inevitably, I think every male at that age is a little bit of a d——-g, so the confluence of those things made me into this like, maniac on the court.”

After his sophomore season, the hoops player met with Coach K to remodel his game. The next two years were the best of his college career.

He listed himself, Christian Laettner, Grayson Allen, and point guard Steve Wojciechowski as the most hated Duke players in history. Lucky for Redick, he played in the the pre-social media era, saving himself direct online harassment.

Redick’s only grown better throughout the course of his NBA career. In stints with the Magic, Milwaukee Bucks, Los Angeles Clippers, Philadelphia 76ers, and New Orleans Pelicans, he’s only missed the playoffs once in his 14 years in the league.

On the Pelicans, Redick was part of five Duke players on the 2019-20 roster, including Zion Williamson, Brandon Ingram, Frank Jackson, and Jahlil Okafor.

That kid with the messy short hair comes off a screen with “Duke” sprawled across the front of his jersey. He catches and shoots on a dime. Opposing fans roll their eyes, expecting the ball to go in like it has so many times before.

JJ Redick has that affect.