8 Michael Jordan Jerseys That Will Be Priceless One Day 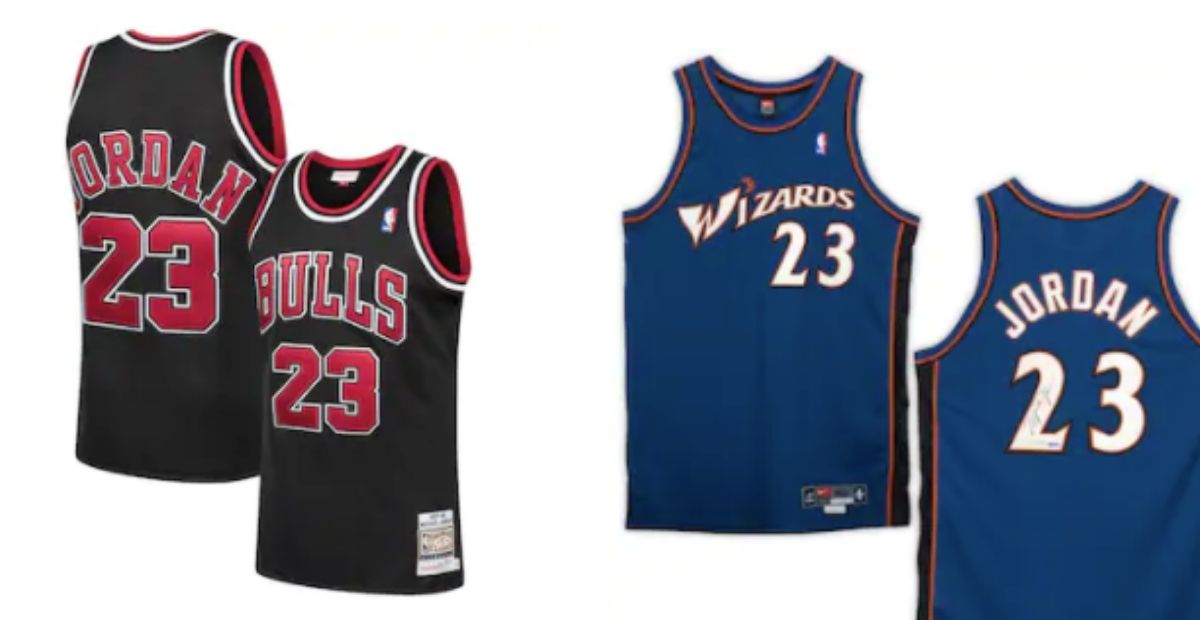 The Netflix documentary “Tiger King” is old news. Now, it’s all about “The Last Dance.” The Michael Jordan documentary has been sitting in the vault for a while now, and it’s all basketball fans can talk about. Many Jordan fanatics are on the hunt for the remaining episodes. Some fans are also searching the web for Michael Jordan jerseys.

Some may say Jordan walked so Kobe Bryant and LeBron James could run. Regardless of your opinion, you have to agree that Michael Jordan is one of the greatest of all time. You can find the NBA legend’s jerseys and popular memorabilia today before they become hard to find. (Just like some Air Jordans.)

Here’s a nice throwback. You can find a replica college basketball jersey on eBay. Can you imagine being the coach that cut Michael Jordan, the GOAT, from his high school varsity team?

I highly doubt that man got to watch Michael Jordan dominate the 1982 NCAA championship against Georgetown.

Of course, the Jordan era started as early as his high school or college days, but Chicago is where it truly all began. After playing at UNC for three years, Jordan was drafted by the Chicago Bulls.

Some of Jordan’s best games playing with Chicago (besides a 1986 playoff game against the Boston Celtics) are the 1997 & 1998 NBA finals vs. Utah Jazz, and of course, the 1991 NBA finals where the Chicago Bulls defeated the Los Angeles Lakers.

Let’s also not forget the time he scored 69 points against the Cleveland Cavaliers and the ‘double-nickel’ game against the New York Knicks. (Don’t call it a comeback.)

Michael Jordan played for team USA, alongside Larry Bird and Magic Johnson in the 1992 Olympics. They were coined the ‘Dream Team.’ Is this one of the best sports superteams of all time? Probably.

“His Airness” did have a brief stint as a baseball player. He never signed to an MLB team, but he did play for the Chicago White Sox and Scottsdale Scorpions as a Minor League Baseball player.

After taking part-ownership of the Washington Wizards, Jordan decided to give it one last try. After his two-year contract ended, he decided to retire for good.

I had to include the “Space Jam” jersey. I had to.

Los Angeles Laker star Magic Johnson and Boston Celtics legend Larry Bird couldn’t even fathom how great a player Jordan was. There will never be another Michael Jordan, so wear these jerseys proudly.

If you find yourself feeling nostalgic, head over to YouTube for unforgettable Jordan highlights against the Philadelphia 76ers, Milwaukee Bucks, Phoenix Suns, Indiana Pacers, and Orlando Magic. For an instant feel-good moment, watch Jordan score 19 points in six minutes against the Memphis Grizzlies.

Or 38 points against the Denver Nuggets.

Don’t forget about the Robin and Batman duo. You can also find Scottie Pippen’s Houston Rockets, Chicago Bulls, and Portland Trail Blazers jerseys on the nbastore.com and eBay.com.

For retro Michael Jordan T-Shirts, Swingman jerseys, figurines, and limited-edition collectibles, be also sure to check out Amazon.

MORE: Scottie Pippen?s Net Worth: ?Robin? Earned More Than Jordan in the NBA