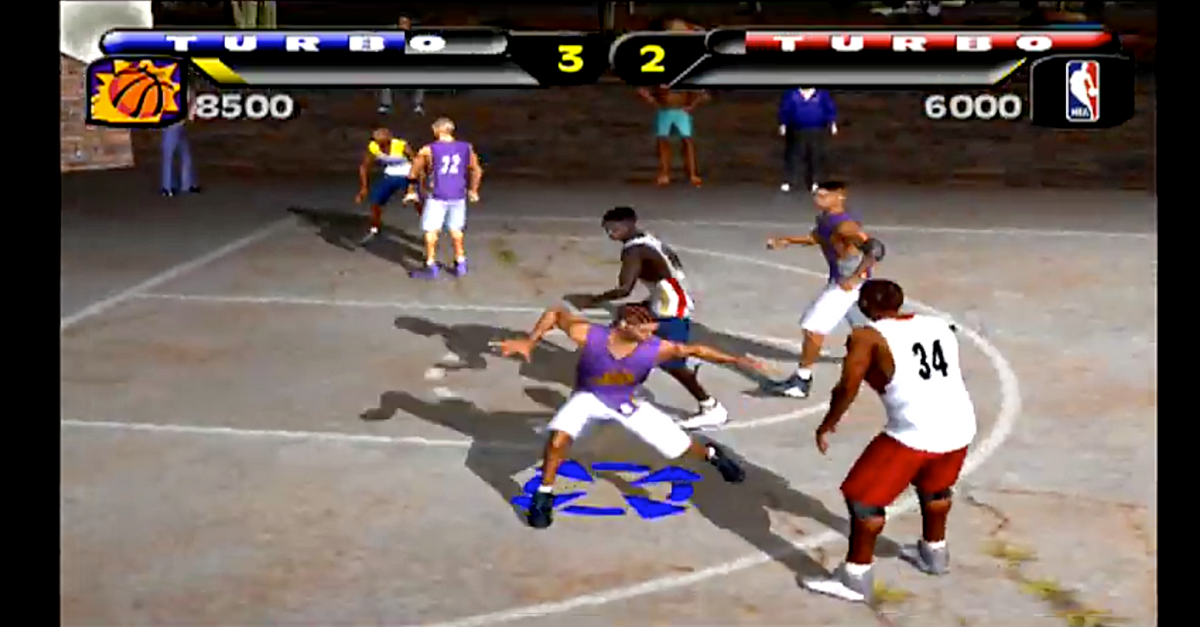 I can envision it now. The loading screen that seemingly took forever to 9-year-old me. The soothing saxophone of Pete Rock & CL Smooth’s “They Reminisce Over You” rising over the main menu. The DJ scratch with every button you pushed. Yao Ming handling the rock like he’s Steve Nash. Dudes with 70-inch verticals catching alley-oops off the backboard.

Here was this new sports game unlike anything before it. Hardwood became the blacktop and 5-on-5 became 3-on-3. NBA Street featured basic basketball rules, but players earned trick points for dribbles, blocked shots, and dunks. These points accumulated to get the almighty Gamebreaker, a flashy shot that adds to your score while subtracting from your opponent’s.

Any lapse of physics was set aside.

The City Circuit mode had you create your own baller and tour various cities across the country, taking on bosses in the process. Biggs, Bonafide, Drake, DJ, Takashi, and Stretch (Dr. J’s doppelgänger) stood in the way of becoming a Street Legend.

The street basketball game was released in 2001 for PlayStation 2 and in 2002 for Nintendo GameCube. It was developed by Electronic Arts’ Canadian branch (EA Canada) and published by EA Sports BIG.

The series found its groove with NBA Street Vol. 2. What more could a video game need than a killer soundtrack and old-school NBA players playing in cargo shorts?

This video game featured the same basic structure of the first game with the main upgrade being a second Gamebreaker. Shaq could one-time a three-pointer in those sequences. Phil Jackson was furious the developers stole that one from his playbook.

The basketball video game had a release date of April 29, 2003 on PlayStation 2, Xbox, and GameCube.

Vol. 2 was near perfection for me. I’d be lying if I said I didn’t follow a playlist of the game’s soundtrack on Spotify.

NBA Street V3 zeroed in on the streetball style of hoops. The biggest addition was the incorporation of real-life courts across the United States, including Rucker Park in New York City. Gameplay was more fluid.

The fourth and final installment in the NBA Street series, NBA Street Homecourt, was released on Xbox 360 and PlayStation 3 in 2007. The gameplay was it’s most exaggerated and absurd. Like V3, this game featured famous courts.

The NBA Street games are the spiritual successors to NBA Jam due to its innovative arcade play on consoles. The games opened the door for NFL Street and FIFA Street, but basketball is where this style shines.

I hold a special connection to Vol. 2, and if a new iteration was released, I owe it to my prepubescent self to play. In the age of the highlight, today’s NBA is ideal for a new Street game. All it needs is a dynamite soundtrack.