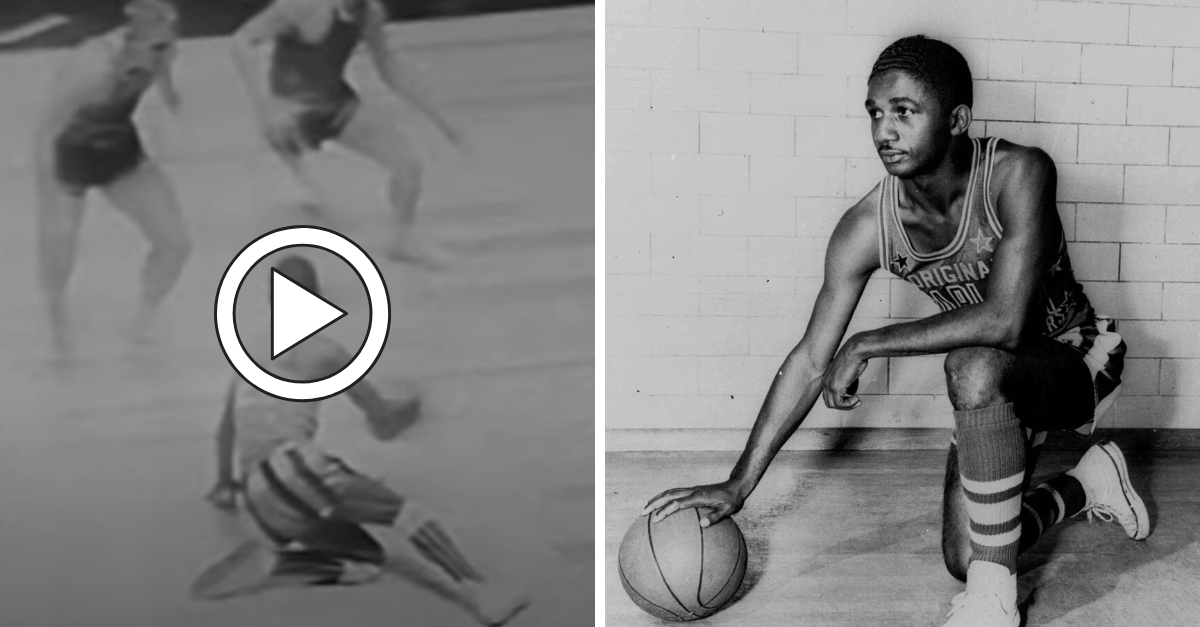 The jury is still out on whether Marques Haynes had a string connecting a basketball to his hand. The Harlem Globetrotters’ ball-handling wizard zoomed, zipped, zigged, zagged, and zoomed (the five z’s of dribbling) around the court, bending the ball to his will.

Haynes wasn’t just a basketball player, he was an entertainer and the Globetrotters’ biggest box office draw.

Haynes was born in Sand Springs, Oklahoma, on March 10, 1926. He spent his young days honing his dribbling skills on a patch of dirt in front of his home and attended Booker T. Washington High School.

The practice paid off. He received a basketball scholarship to play point guard for Langston University and prospered. During his four years at Langston, the team went 112-3, including a 59-game winning streak.

Haynes caught the attention of Globetrotters’ owner Abe Saperstein when Langston beat Harlem in an Oklahoma City exhibition game. Saperstein, impressed by Haynes’ abilities, invited him to join the Globetrotters after graduation. Haynes put on the red, white, and blue uniform for the first time in 1947.

He was perhaps the greatest ball handler of all-time. We're taking a moment to remember the great Marques Haynes today, on what would have been his 92nd birthday. #Legend pic.twitter.com/uKAtDGKjoZ

As a member of the Harlem Globetrotters, Haynes shined. His pageantry was the perfect marriage to Harlem’s entertaining style of basketball. The world’s greatest dribbler enjoyed six years of success on the Globetrotters, but his relationship with Saperstein festered.

After quitting the team, Haynes was offered a $35,000 per year offer to play in the NBA for the Philadelphia Warriors. The deal would’ve made him the second-highest paid player in the league. He discovered Saperstein was a part-owner of the Warriors and turned the offer down. He formed his own barnstorming team, the Harlem Magicians instead. The Minneapolis Lakers tried to woo Haynes as well, but he declined.

Saperstein passed away in 1966, and Haynes rejoined the Globetrotters as a player and coach in 1972. He played for the Globetrotters until 1979. In the last years of his career, he had stints with Meadowlark Lemon‘s Bucketeers, the Harlem Wizards, and a new iteration of his Harlem Magicians.

The Harlem Globetrotters legend is one of the greatest basketball players to never play in the NBA. It’s estimated he played at least 12,000 games in over 100 countries during his professional basketball career.

In 1998, he became the first Globetrotter to be inducted into the Naismith Memorial Basketball Hall of Fame. He was inducted into the Oklahoma Hall of Fame in 2011. He joined the staff of the Texas Legends, the Dallas Mavericks’ G-League team, that same year. Even in his old age, basketball ran through his mind like he ran up and down the court.

He died on May 22, 2015 in Plano, Texas. Haynes is known for being one of the best ball handlers who ever lived.

The Hall of Famer’s world-class skills baffled opponents and the crowd alike while influencing basketball legends Bob Cousy, “Pistol” Pete Maravich, and Fred “Curly” Neal. He proved he can compete and win, but his showmanship demanded freedom. He embarked on world tours, beat George Mikan and the Lakers in 1948, and made the Globetrotters must-see entertainment.

MORE: NYC’s Rucker Park: The Most Famous Playground in Basketball