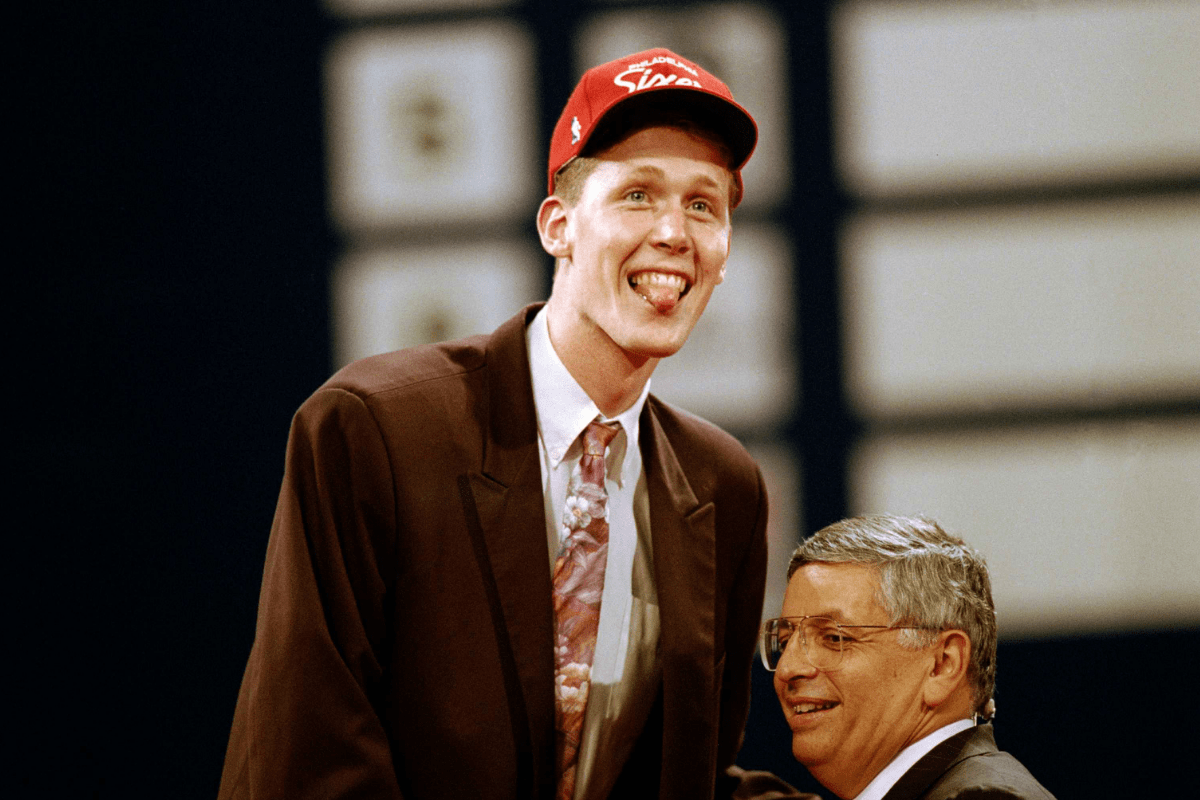 Program height is like walking into an open house a few streets over. You’re not particularly in the market; you’re just taking a flyer and having a look around. You have to let any potential neighbors know who the 2013 Northwest Subdivision Section 208 BBQ champ is. It’s a subtle way to assert dominance.

When coaches look over rosters and make scouting reports, the difference between 6-foot-7 and 6-foot-5 is a guy who’s dominant in the post and a guy who’s decent.

On dating apps, 6-foot and 5-foot-11 is the difference between an ant hill and Mount Everest.

However, there comes a point when program height becomes obsolete.

For 7-foot-6 former NBA center Shawn Bradley, the need to smudge his height went out the window a long time ago. It’s just, “Holy cow this guy’s tall.” He went into the dating world and women had casual meals with a Redwood.

Breakfast with former NBA center Shawn Bradley and his wife. Discussing E4A events coming up and additional tools to help you athletes do good. Can you guess which one the NBA player is from this photo? 😉 #EyesUpDotheWork pic.twitter.com/I63z3GGMzt

Shawn and Annette Bradley are private about their beginnings. They’ve reportedly been together since Shawn entered the NBA.

The couple tied the knot at a private ceremony in Salt Lake City, Utah.

Together they have six children: daughters Chelsea Bradley, Ciera Bradley, Charity Bradley, and Cheyenne Bradley along with sons Chase Bradley and Chance Bradley.

Anette measures in at 5-foot-3, making the height difference between her and her husband 27-inches. Anette would have to stand on the shoulders of an infant to equal Shawn’s height. I imagine this was a requirement of their children. There’s nothing more honorable than supporting your mom on your shoulders at a young age. Builds character.

On top of that, Shawn’s taller than Annette when he kneels down. He was essentially at her eye level when he proposed ? and they say chivalry is dead.

Shawn Paul Bradley was born on March 22, 1972, in Landstuhl, West Germany (now Germany) to Reiner Bradley and Teresa Bradley. His family moved back to the United States when he was young, and he grew up outside of Castle Dale, Utah. As a member of the Church of Jesus Christ of Latter-day Saints and a standout at Emery High School, Bradley chose to play college basketball at Brigham Young University.

In 34 games as a freshman, the center averaged 14.8 points, 7.7 rebounds, and 5.2 blocks per game. Bradley took a two-year leave of absence from BYU following the season to serve as a Mormon missionary in Sydney, Australia. When he returned, he decided to forego his college eligibility and enter the National Basketball Association.

He was the second-overall pick by the Philadelphia 76ers in the 1993 NBA Draft. He had trouble adjusting to the league and was inconsistent. The former professional basketball player made stops with the New Jersey Nets and Dallas Mavericks before retiring in 2005.

The big man is tied for the second-tallest player in NBA history with Yao Ming. Gheorge Muresan and Manute Bol top the list at 7-foot-7.

Bradley competed with Mavs teammate Dirk Nowitzki on the German national team that finished fourth at the EuroBasket 2001.

Here are his NBA and college highlights:

Bradley was one of the five NBA players along with Muggsy Bogues, Larry Johnson, Charles Barkley, and Patrick Ewing who lost their talents in the 1996 film Space Jam. He made appearances in the show Walker, Texas Ranger and the 2002 movie The Singles Ward. He appeared in a 2011 music video tribute to Jimmer Fredette with legendary BYU coach LaVell Edwards and football star Chad Lewis.

He was the centerpiece of the ESPN 30 for 30 short “Posterized” for his tendency to be on the receiving end of thunderous dunks.

MORE: Magic Johnson?s Wife Has Stood By His Side Through It All