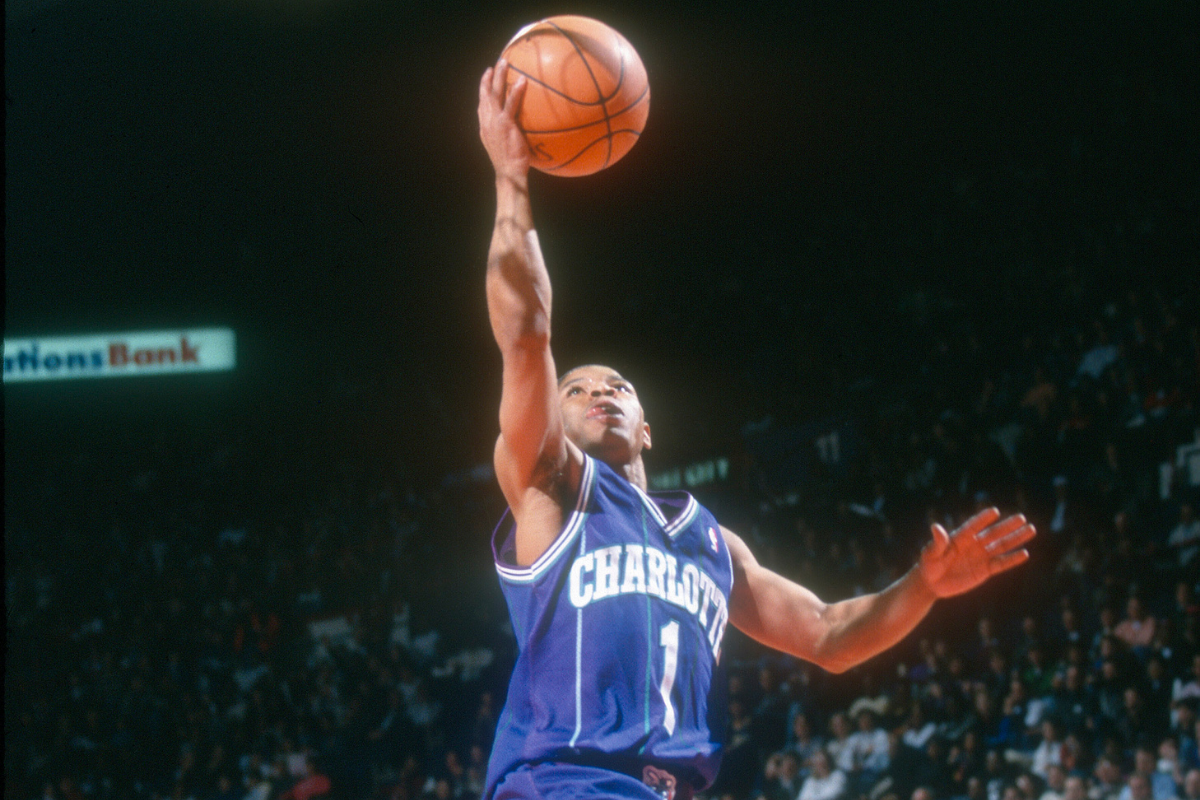 At 5-foot-3, Bogues is the shortest player to ever play in the NBA. He enjoyed a 14-year career, wowing with dazzling passes and lightning quickness.

Spud Webb proved small guys could do more, too. The 5-foot-7 Atlanta Hawks guard is famous for throwing down and besting Dominique Wilkins in the 1986 NBA Slam Dunk contest.

This raises the question: Could Muggsy dunk?

Bogues played on the Dunbar High School basketball team in his hometown of Baltimore, Maryland, where he was teammates with fellow NBA player Reggie Williams. He went on to Wake Forest University, where he averaged 8.3 points, 6.6 assists, and 2.3 steals in his four-year career. As a senior, he was named First-team All-ACC. He left as the conference’s career leader in assists and steals

The Baltimore-raised basketball player was selected 12th overall by the Washington Bullets in the loaded 1987 NBA Draft that included perennial NBA All-Stars Scottie Pippen and Reggie Miller. As a rookie he was teammates with 7-foot-7 Manute Bol ? the tallest player in NBA history.

The point guard joined the Alonzo Mourning and Larry Johnson-led Charlotte Hornets in the 1988 expansion draft. He played for the Golden State Warriors and Toronto Raptors before retiring in 2001. Over the course of his NBA career, he averaged 7.7 points, 7.6 assists, 2.6 rebounds, and 1.5 steals.

He served as head coach of the Charlotte Sting, a defunct WNBA team, from 2005-07.

The NBA legend reportedly had a 44-inch vertical leap, but he couldn’t dunk?at least in an NBA game. Witnesses claim to have seen Bogues throw it down in high school and professional pregames, though, no video evidence exists.

I imagine if he could, it would be something like Calvin Cambridge dunking in Like Mike. He would beeline to the rim at a 45-degree angle. Dallas Mavericks guard Luka Doncic would be asking for autographs for his nephew Luka. Los Angeles Lakers forward Kyle Kuzma would make a TikTok song about it. LeBron James would tweet out his admiration. Steph Curry would wish he had Bogues’ vertical jump in the playoffs.

Bogues might not be an in-game dunker, but as the shortest NBA player of all-time, it’s remarkable he could even come close.