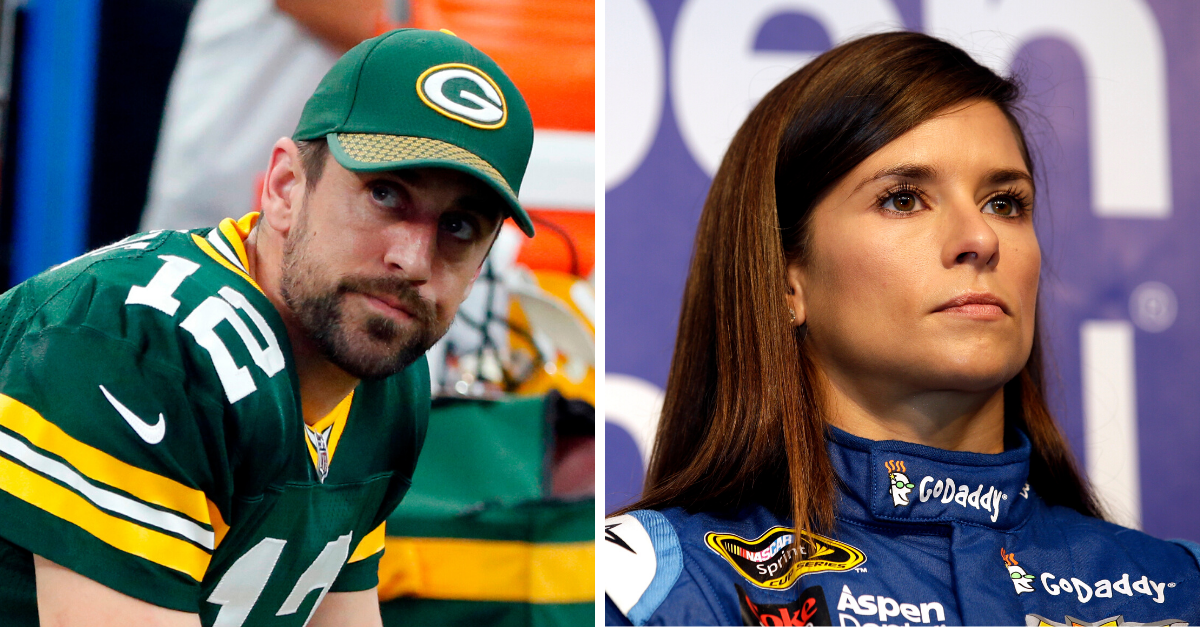 Disney roped us in by creating, selling and repurposing the perfect fairy tale; Beautiful female protagonist, wrapped in layers of pressure and negativity, gets saved by a gallant male hero. It’s a tale as old as time. When it came to retired race car driver Danica Patrick and Green Bay Packers quarterback Aaron Rodgers, while the “damsel in distress” narrative doesn’t apply, the power couple seemed destined to live “happily ever after.”

Then, Patrick unfollowed Rodgers on Instagram, and the rumors began to swirl.

About a week went by before hopeless romantics everywhere felt their heart sink. Confirmed by a representative of Danica Patrick to E! News, the couple are “no longer together” after over two years of dating, living together in a $28 million home in Malibu, and countless memories over the years.

Aaron Rodgers, Danica Patrick Break Up After 2 Years of Dating

Made it back a month ago from Machu Picchu by the skin of our teeth. What an amazing sight to see and FEEL! I can’t wait to travel again! I’m a good homebody, but I love to see the world. There is so much beauty out there!!!! I think it’s also the easiest way to let go of cultural biases. We are more alike than different. And if we are different….. sometimes it’s better…. And I learn something. ☺️ . I know it’s a tough time right now with work and money, but if you have the ability to plan a trip, it’s a great time to research. Might even be some good deals out there too! And if you can’t, dream into it for the future!

At first, the pairing seemed perfect. Two stars at the top of their sports ? One making history at 200 miles per hour and the other tossing touchdowns for breakfast, lunch and dinner. Patrick explained to USA Today Sports back in 2018 that after meeting each other at the 2012 ESPY Awards, they kept in “vague touch” over the years. When Patrick broke up with fellow NASCAR driver Ricky Stenhouse Jr., then Rodgers split with actress Olivia Munn, the pair found each other naturally.

“So one thing led to another, and we realized how similar we were, and yeah, that got the ball rolling,” Patrick said at the time.

Last November, Jenny McCarthy brought up the question of marriage on her SiriusXM podcast. Patrick, whose final race was the 2018 Daytona 500, was apparently very interested but “wasn’t trying to rush it,” according to TMZ.

Patrick worked to help mend a broken relationship between the NFL player and brother Jordan Rodgers, now an analyst for ESPN’s SEC Network. Rodgers regularly attended NASCAR races to cheer on his significant other. There was plenty of good during their two-year relationship, but apparently, something caused a riff amidst the coronavirus pandemic and surging COVID-19 virus.

Patrick didn’t attend the American Century Championship held in July 2020, a celebrity golf tournament in Lake Tahoe, which Rodgers played in. That fact, paired with the Instagram unfollowing, sent the Internet rumor mill ablaze. According to E! News‘ report, the rumors were true.

Patrick apparently deleted several posts of the now former couple from her Instagram feed, too.

But an interesting question arose in the wake of the news: Was Rodgers already plotting his next move?

Summer is almost over… 😭 #shailenewoodley

A tip sent to sports gossip blog Terez Owens started the rumor that the two-time NFL MVP and eight-time Pro Bowl quarterback traded one celebrity for another. This time, Rodgers is rumored to be (as Jada Pinkett Smith eloquently said) entangled with 28-year-old actress Shaliene Woodley.

“It seemed like Aaron had found his perfect partner in Danica Patrick. Danica had no idea when she introduced actress Shailene Woodley to Aaron that Shailene would make a play for him. Shailene and Aaron were quite cozy this past weekend in Tahoe. Looks like Aaron traded to a much younger girlfriend. Danica is devastated by Aaron?s betrayal. Get your popcorn out, this one is going to get messy!”

Unconfirmed rumor? Absolutely. Possible? Sure, why not.

Woodley is an Emmy Award and Golden Globe award nominee who’s starred in films The Spectacular Now (2013), The Fault in Our Stars (2014) and played Tris Prior in The Divergent Series. She also starred in HBO’s Big Little Lies, earning multiple award nominations for her role was a sexual assault survivor.

We’ll see what the social media rumor mill churns up next, but one thing is certain. Not all fairy tales have happy endings after all.