Adrian Peterson is a lock for the Pro Football Hall of Fame. The running back is now past his prime, but you don't have to look far to remember how incredible he was.

All Day's old high school football highlights prove that he was destined for greatness from an early age. The Minnesota Vikings, Arizona Cardinals, New Orleans Saints, Washington Redskins, and Detroit Lions have rostered Peterson in the NFL, but he was initially a product of Palestine, Texas.

Adrian Peterson played for Palestine High School and was every bit the offensive weapon we've grown accustomed to for all these years. He was noticed by scouts for the first time nearly 20 years ago.

These highlights from the 2002 and 2003 seasons should be familiar: No. 28 rushing between the tackles, looking for contact, then pushing his way into the end zone for a touchdown.

Peterson was a force in the Houston area. In his junior season, he had over 2,000 rushing yards and reached the end zone 22 times. His senior year was even more impressive: 2,960 yards and 32 TDs.

The standout tailback was recruited heavily by NCAA programs and ultimately settled on the Oklahoma Sooners.

Even the most optimistic pundits wouldn't have expected him to become one of the best RBs in NFL history.

Peterson's childhood was a tragic one. He witnessed his brother get killed by a drunk driver. Some players would let those struggles define them, but Peterson had the motivation to persevere.

Adrian Peterson came into the college football world in a frenzy with nearly 2,000 rushing yards and a second-place performance in the race for the Heisman Trophy as a freshman.

His sophomore year was more of the same, although the University of Oklahoma was not as successful.

He only played in seven games his junior year, but he still had 1,148 yards from scrimmage. Head coach Bob Stoops ran the offense through Peterson, and for good reason.

Adrian Peterson in the NFL

.@AdrianPeterson's 2012 season - only a year after a serious injury - is simply legendary.

Scouts were high on Peterson after his time with the Sooners and the Minnesota Vikings took him with the seventh-overall pick in the 2007 NFL Draft. ESPN immediately made comparisons to Eric Dickerson.

While lofty, Peterson reached his potential for superstardom. It only took 14 games for the star rusher to transform the Vikings' game plans and win the Offensive Rookie of the Year award.

A torn ACL and MCL in 2011 nearly derailed his career. The injury occurred in December, but Peterson was determined to return in time for the next NFL season.

And that he did. He rebounded from his knee injuries to win MVP in 2012. With 2,097 yards, he just barely missed out on the single-season rushing record set by Dickerson.

To date, he has represented the NFC in the Pro Bowl seven times, won a Player of the Year award, and has the respect of running backs across the league. Peterson is one of the best football players of this generation.

Peterson has had a legendary career. He holds several Vikings single-game and regular-season rushing records, and Bears, Lions, and Packers fans surely have flashbacks of his prolonged success in the purple and gold.

For a guy who was good enough to give out his autograph as a high schooler, Peterson has done everything to live up to the hype. 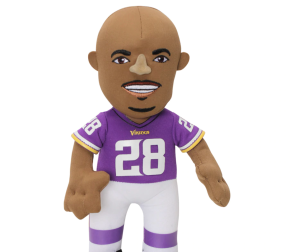