The Browns Don’t Care What Baker Mayfield Says. Neither Should You. 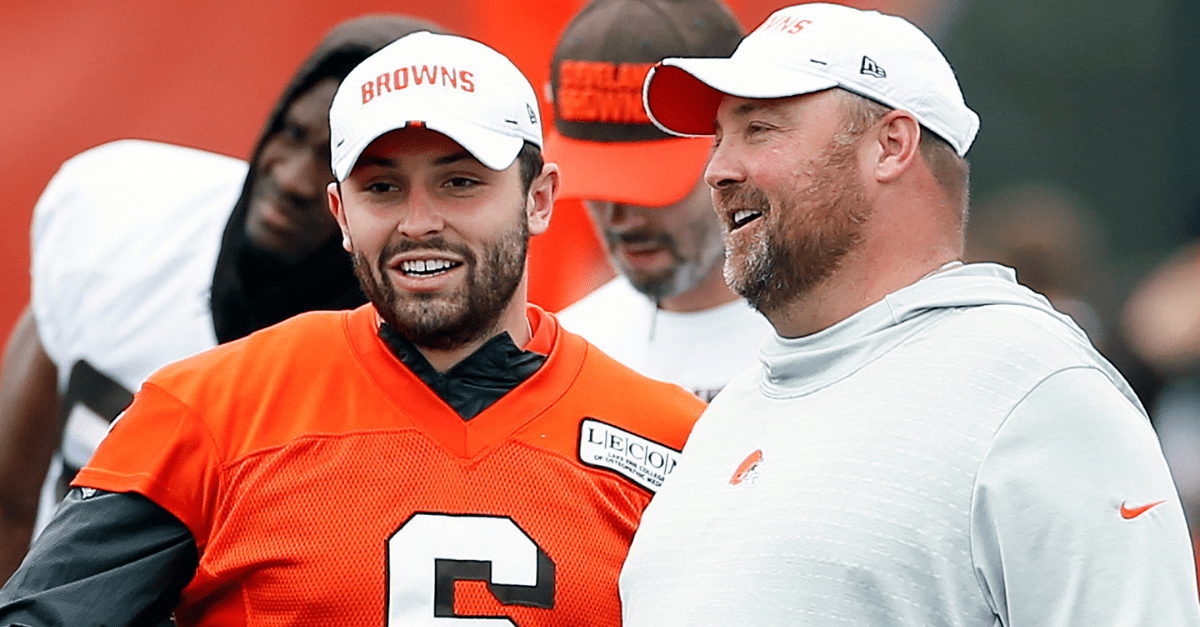 BEREA, Ohio (AP) — Baker Mayfield‘s mouth may have made any target on the brash quarterback or the Browns a little bigger.

Mayfield, who has never been afraid to speak his mind on any subject, made puzzling comments about the New York Giants and their decision to draft rookie quarterback Daniel Jones in the first round this year.

“I cannot believe the Giants took Daniel Jones,” Mayfield said, according to GQ. “Blows my mind.”

Baker Mayfield to @GQMagazine on Daniel Jones: “I can not believe the Giants took Daniel Jones. Blows my mind. … Some people overthink it. That's where people go wrong. They forget you've got to win.” pic.twitter.com/XFF1ligqWL

RELATED: Baker Mayfield Gets Brett Favre Comparisons. Are They Right?

Thee 24-year-old added he thinks NFL teams are flawed in how they evaluate quarterbacks.

Mayfield’s remarks, which seemed to come out of nowhere, filtered back to Giants’ training camp where coach Pat Shurmur and Jones chose to take the high road and not directly comment about them.

“I try not to listen to much that’s said,” said Jones, who was taken by New York with the No. 6 overall pick in April. “I think I’ve done a pretty good job of that. I heard that before, I kind of have the same mindset, I certainly have a lot to focus on here, I have a lot to worry about here and I’m focused on that. It’s been good, but just focused on what I’m doing here.”

Jones said he doesn’t know Mayfield, and was a little stunned by his comments.

“I have never spoken to him,” Jones said. “He has an opinion, a lot of people have opinions.”

Daniel Jones when asked about Baker. Rook is taking his Eli mentorship seriously.

Kitchens had one on Mayfield and whether his actions could be detrimental for the Browns, who have major expectations coming off a 7-8-1 season and an offseason rebuilding their roster with top-flight talent.

Kitchens said he isn’t worried about the Browns having a bull’s-eye on their backs.

Following practice, Mayfield posted on Instagram that he was taken out of context.

“This is not what I said … just so we’re clear,” he wrote. “I also said I was surprised I got drafted number one. Then was talking about the flaws in evaluating QBs. Where I brought up winning being important. Reporters and media will do anything to come up with a clickbait story. Heard nothing but good things and wish nothing but the best for Daniel.”

Mayfield is scheduled to meet with reporters Wednesday.

Of course, he wasn’t the only Browns player jabbing with the Giants as superstar wide receiver Odell Beckham Jr. took another swipe at his former team.

In a Sports Illustrated cover story, Beckham said New York turned down better trade offers to send him to Cleveland in March.

“This wasn’t no business move,” he told SI. “This was personal. They thought they’d send me here to die.”

Shurmur, who spent part of last season sparring with Beckham or dealing with drama around him, chose not to engage any further with the three-time Pro Bowler.

“Quite frankly on our list of issues of the day it really doesn’t matter what Odell or Baker says,” Shurmur said. “There are many other things we probably should be discussing. Again, we wish him (Beckham) well and it was a trade. We said that all along, I said I would not comment on what he says about the situation.”

READ MORE: It’s Time to Trade Ezekiel Elliott (Plus 3 Teams That Should Be Calling Dallas)