HBO Releases Trailer for “Belichick & Saban: The Art of Coaching” 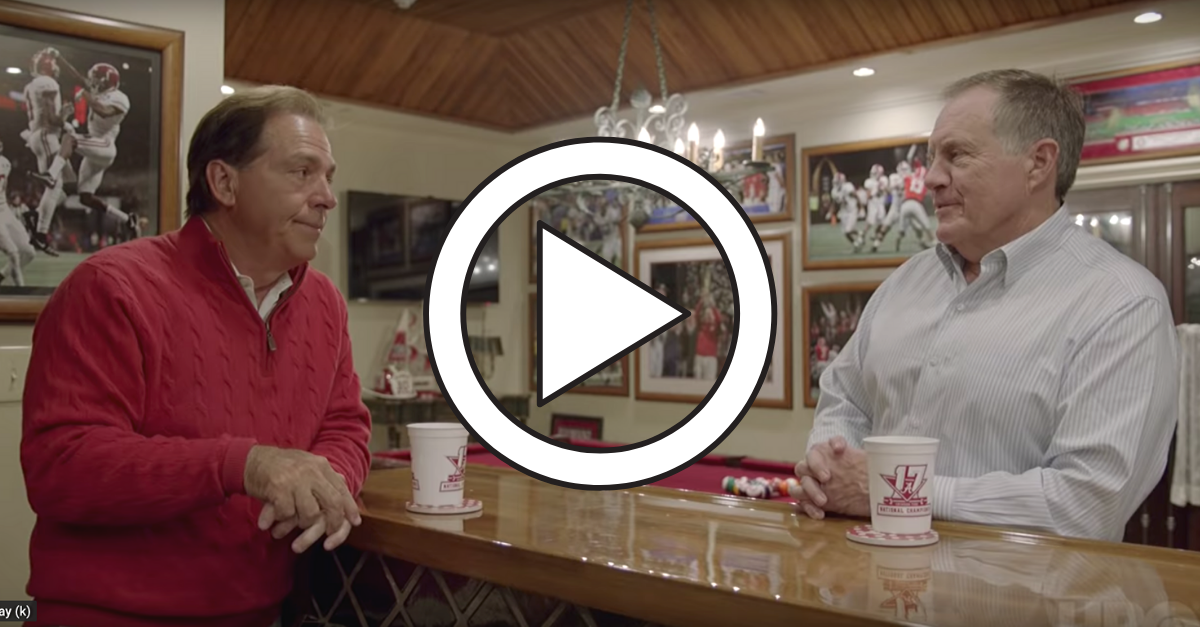 Greatness is defined many ways, but in sports, it’s all about winning. If you aren’t capturing national titles and beating rivals over and over, you’ll never reach the top of that proverbial mountain. Traditionally, American sports only produces one or two ground-breaking head coaches every decade. The women’s basketball landscape was built by Pat Summitt. Vince Lombardi’s Packers laid the foundation on which the National Football League still sits today.

But what happens when greatness collides? When two of the greatest minds in sports history meet, how do they feed off one another and become even better at what they do? Is it possible that their legacies not only mirror one another, but are products of each other?

In the summer of 1982, a young and fiery Nick Saban coached defensive backs for the Navy Midshipmen. On that staff was Steve Belichick ? Bill’s father is considered a pillar for modern football scouting ? who worked at the Naval Academy for more than 30 years. At a dinner party at the Belichick home, Saban and his wife Terry joined Bill Belichick, who worked as linebackers coach of the New York Giants, and his wife Debby for the dinner.

Both met in secret some years later to discuss the intricacies of the Cover-2 defense. When Belichick was hired as head coach of the Cleveland Browns in 1991, he hired Saban as defensive coordinator. It was these four NFL seasons where iron sharpened iron, coaching philosophies were born, and the two icons learned how to build and run iconic programs from each other.

“When Bill and Nick walked in the room, there was a different response from players, coaches, everyone,” Chuck Bresnahan, a former Browns assistant coach, told Sports Illustrated. “Things got quiet. You knew it was time for business.”

These titans of the industry parted ways following a loss in the 1995 AFC Divisional Playoffs ? Saban took over as head coach of Michigan State ? but that friendship remained, and the two still meet every year to talk football, family and life.

On Tuesday, Dec. 10, HBO Sports is releasing a feature-length film with unprecedented camera access showing the life-long bond between these two head coaches in a documentary titled Belichick & Saban: The Art of Coaching.

RELATED: Who is the Greatest Coach in College Football History?

New England Patriots head coach Bill Belichick is a savant. The three-time AP NFL Coach of the Year won six Super Bowls in his two-decade tenure, owns the NFL record for most playoff wins (31) and Super Bowl appearances (9) heading into the 2019 postseason, and his 271 regular season wins trails only Don Shula and George Halas for the most in NFL history.

Alabama Crimson Tide head coach Nick Saban’s resume is oddly similar in Tuscaloosa. Saban’s six college football national championships ? one at LSU and five at Alabama ? are tied with Bear Bryant for the most ever. The four-time SEC Coach of the Year owns a .785 winning percentage as leader of Toledo, Michigan State, LSU and Alabama, which trails only Nebraska’s Tom Osborne (.836) as the winningest coach in FBS college football history.

How do you compare two of greatest coaches ever when they dominate two different levels of football? Well, they met four times during the 2005-06 seasons when Saban coached the Miami Dolphins in the Patriots’ AFC East division, but the results were as even as these men’s legacies.

The Patriots' newest running back, Alabama's Damien Harris, credits the tight Belichick/Saban friendship for his ending up in New England:https://t.co/j3iIeLldpc pic.twitter.com/uh7nMjVoIZ

This HBO documentary is going to be incredible. Bust out these best friend T-shirts and enjoy watching two incredible football coaches unearth one of the coolest friendships the sports world will likely ever see.

Belichick & Saban: The Art of Coaching is executive produced by Brian Rolapp, Hans Schroeder, Ross Ketover, Pat Kelleher with NFL Media, as well as Peter Nelson and Rick Bernstein for HBO Sports. It’s directed by Ken Rodgers, is produced by Paul Camarata, and the music was composed by Dave Robidoux of NFL Films

READ MORE: Tom Brady’s Net Worth is More Impressive Than His Hall-of-Fame Resume