Keenen Allen Roasts Women for Believing They Could Be NFL Kickers 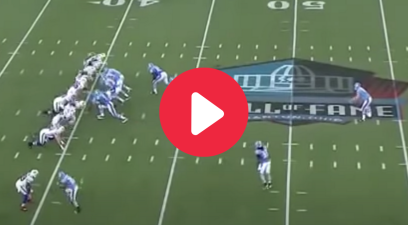 It’s hard being an NFL kicker. Just ask old Chicago Bears kicker Cody Parkey. Or you could talk to Daniel Carlson. Check and see what Matt Bryant’s 17 seasons earned him. Life kicking footballs, as luxurious as it might sound, is probably the least-secure job in sports. You’re either a hero, or you kick long enough to see yourself become the villain. (Yes, I am paraphrasing Batman on a Monday.)

Kickers come and go in the National Football League every few weeks it seems, but there’s an untapped candidate pool that might finally get a shot. We’ve seen female kickers before, but a recent viral video of U.S. soccer player Carli Lloyd drilling field goals during Philadelphia Eagles practice is ramping up the conversation about women in pro football.

Lloyd is a two-time Women’s World Cup champion with the USWNT, two-time FIFA Player of the Year and two-time Olympic gold medalist. The 37-year-old is still tearing up the National Women’s Soccer League, leading Sky Blue FC in goals scored despite only playing about half the team’s games in 2019.

Her soccer career might be winding down, but Lloyd flashed her cannon right leg at Philly’s training camp during a joint practice with the Baltimore Ravens. She sent social media into a frenzy by nailing a 55-yard field goal between rugby-width goal posts.

Thank you to the @Eagles for having me out! Thanks to @JustinTuck @jake_elliott22 @MayorRandyBrown for the good time and tips! 🏈 🎯 #55yd pic.twitter.com/owZ16f46Th

After that viral video, Lloyd told Sports Illustrated’s Planet Futbol TV that she’s “definitely got some inquiries” about potentially trying out for an NFL team. Lloyd didn’t rule out changing sports, and she even suggested that women breaking the gender barrier in professional football could very well be on the horizon.

“There’s been some interesting chatter about it. I think anything is possible. It’s been really interesting because for me, I’m just an athlete, I’m a competitor. But for so many other people, I think they’re starting to think will there ever be a female in the NFL at some point. And I think we’re kind of at that crossroads as far as equality and just women empowerment so you’re kind of being in the crosshairs of that.

Honestly, I don't think it will be long before we see a woman break through this NFL barrier. I'd give her an honest tryout if I were, say, the Bears. https://t.co/pyIlIY6Jxv

Who knows what the future holds for the U.S. Women’s National Team star and die-hard Eagles fan. Lloyd may not be the first to get an honest tryout, but if this is reaction is any indication, someone is going to get the call and become the first woman to break the NFL barrier sooner than you think.

UPDATE: After claims from Carli Lloyd’s trainer that she received an invite to kick during a live-action NFL preseason game, Los Angeles Chargers wide receiver Keenan Allen took to Twitter and shut down any thought that she could actually pull it off.

Sound sweet til somebody block the kick and all of a sudden she on defense😂. Would be like the stampede scene in the lion king movie 😂😂 . She do got a boot tho! https://t.co/K8VxnHp6gB

“Sound sweet til somebody block the kick and all of a sudden she on defense. Would be like the stampede scene in the lion king movie. She do got a boot tho!”

Apparently, not everyone is so keen on the idea of women getting a legitimate chance to prove anyone can kick a football…

READ MORE: Andrew Luck Retired. Then, Colts Fans Labeled Him as a “Quitter”