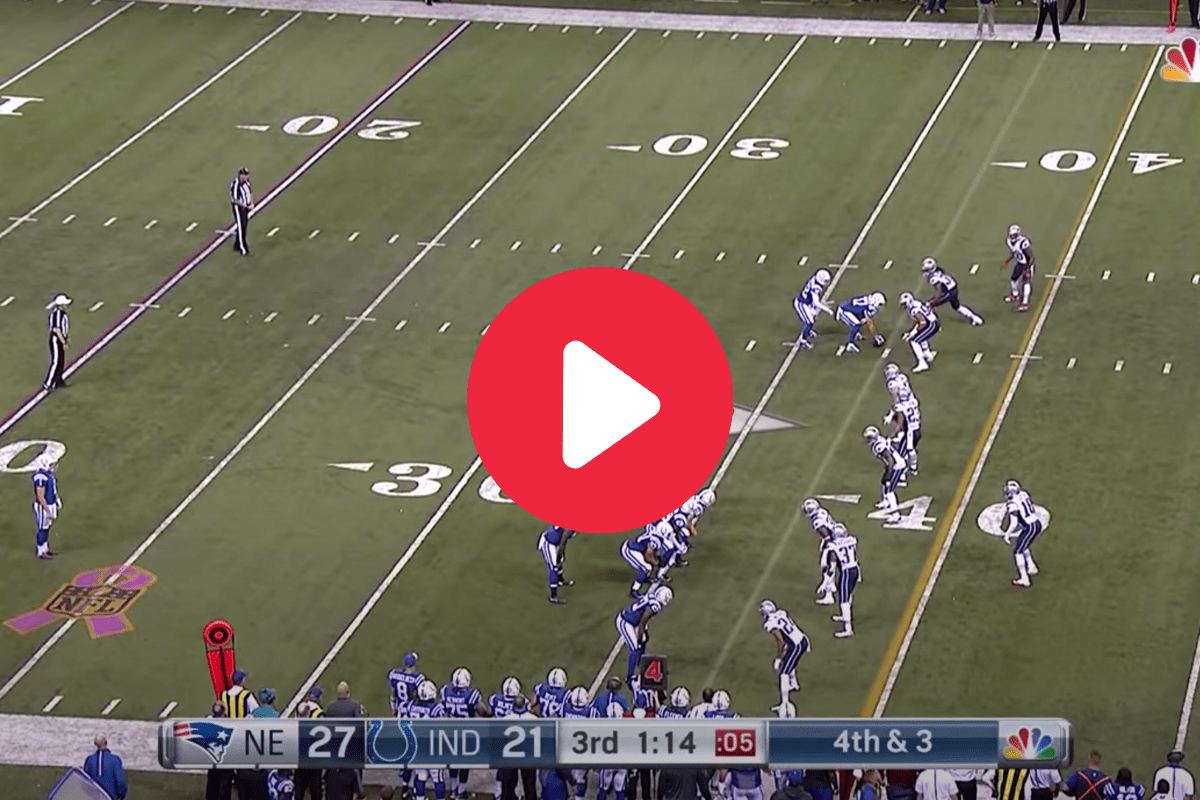 Trick plays are designed to catch an opposing team off guard. It doesn’t take a rocket scientist to figure that out. When one works, the coach looks like a genius. When it doesn’t, he looks look an idiot. Perhaps nobody understands that more than former Indianapolis Colts head coach Chuck Pagano.

Back in October 2015, the Colts ran one of the worst plays in NFL history. There’s no other way to describe it. Everything they were trying to do against the New England Patriots on “Sunday Night Football” completely backfired, and it left everyone with more questions than answers.

There have been some bizarre moments over the years, but this one definitely takes the cake.

Facing 4th-and-3 late in the third quarter, the Colts decided to kick it away. So they sent Pro Bowl punter Pat McAfee out to give it a good boot with the hopes of pinning Tom Brady, Bill Belichick, and the Patriots back in their own territory.

Then, something weird happened that damn near set football back a few decades.

McAfee, along with the rest of the Colts’ punt team, trotted toward the sideline. They were looking to deceive the Patriots to either sub out their entire special teams unit or force them to call a timeout. Neither of them actually happened, and it gave us the dumbest play we didn’t know we needed to see.

Instead of calling a timeout of their own, or rushing back to actually punt it away, or any of the other sane options available, wide receiver Griff Whalen snapped the ball to safety Colt Anderson. He was tackled immediately and a flag was thrown.

The Colts were flagged for illegal formation because the entire right side of the offensive line wasn’t on the line of scrimmage. The penalty was obviously declined and the Patriots ultimately scored a touchdown on the following possession.

“The point of the play is to be a deception play. You’re trying to manipulate the defense into thinking they have to sub their defense back on. So we’re sprinting to the sideline in hopes to make the other team think that we’re subbing our offense back onto the field. So when they think the offense is coming back onto the field, your hope is that they think that their defense has to come back on the field. So as soon as their defense comes back on the field, we snap it, we steal 5 yards, we get a first down … So there’s the intention of it?

??We added something to try to draw them offsides if they don’t do their substitutions. Griff (Whalen) never got the heads-up that this was happening because it’s not in the playbook. Stanford guy reads the playbook, knows everything he has to do, but if he’s not there for an audible that’s added, he can’t know. So, Griff has no idea that we’re going to try to draw the guy offside because in the play it says if we get under center, snap it. So Colt Anderson is trying to draw a guy offsides to pick up an easy 5 yards. If not, we just don’t snap it, we take take the delay of game.”

To make matters worse, safety Clayton Geathers was supposed to be the snapper on the play instead of Whalen, but he left the game early with an injury.

The ball should have never been snapped in the first place, but here we are, years later, still laughing that a professional football team actually did this.

MORE: The “Butt Fumble” Lives On in Football’s Hall of Shame