Does anyone remember a time when the Alabama Crimson Tide weren't the top dog in college football? It was a crazy little time called the mid-2000s, when Nick Saban was still on vacation in Miami.

He was a member of one of Saban's first recruiting classes in Tuscaloosa and helped kickstart a dynasty.

That was over a decade ago. Where is the former Alabama running back now? 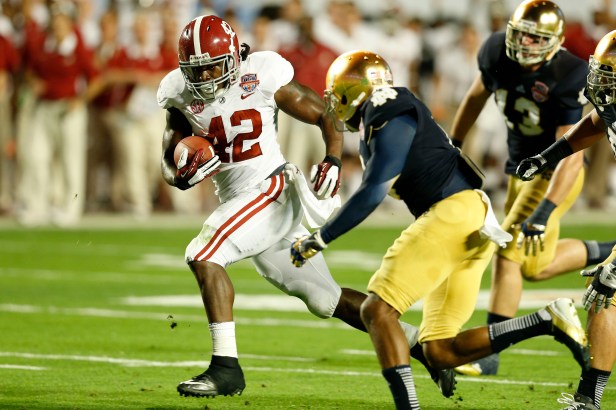 07 JAN 2013: Eddie Lacy (42) of the University of Alabama picks up a big gain against the University of Notre Dame during the Discover BCS National Championship game held at Sun Life Stadium in Miami Gardens, FL. Jamie Schwaberow/NCAA Photos via Getty Images

RELATED: Trent Richardson's NFL Career Failed, But Where Is He Now?

Running back Eddie Lacy was a beast at Dutchtown High School in Geismar, Louisiana. A four-star recruit and the No. 13 running back in the nation, Lacy committed to play under head coach Nick Saban at the University of Alabama.

Lacy redshirted as a freshman behind star backs Mark Ingram and Trent Richardson.

He saw limited carries as a redshirt freshman, then played second fiddle to Richardson as a sophomore. Lacy finally had control of the backfield as a redshirt junior in 2012, and boy did he take advantage.

He rushed for 1,322 on 204 carries, accumulating 17 scores on the ground and 2 touchdown receptions. For his career, Lacy recorded 2,402 rushing yards and 35 touchdowns.

He left Tuscaloosa with three NCAA national championship rings. It's safe to say he was a legend there just like Heisman Trophy-winning running back Derrick Henry and wide receiver DeVonta Smith. 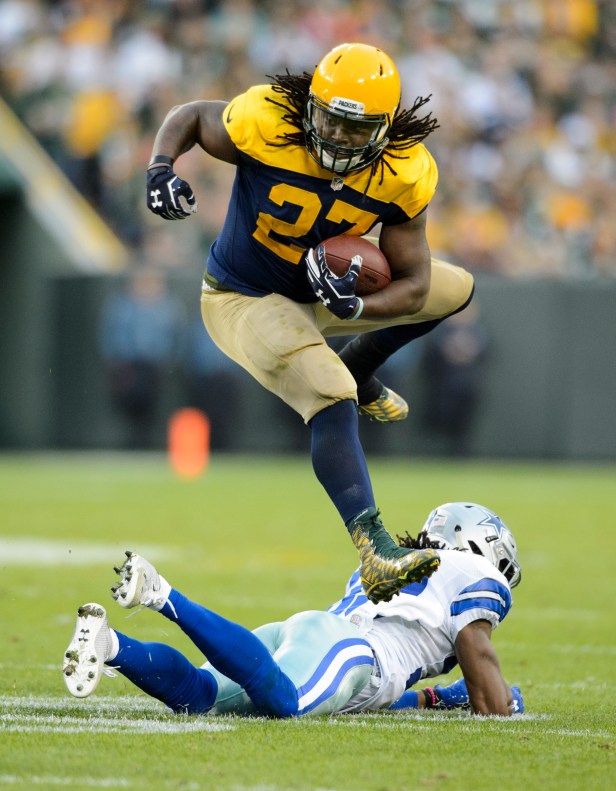 GREEN BAY, WI - OCTOBER 16: Eddie Lacy #27 of the Green Bay Packers leaps over Brandon Carr #39 of the Dallas Cowboys during the game on October 16, 2016 at Lambeau Field in Green Bay, Wisconsin. The Cowboys defeated the Packers 30-16. (Photo by Hannah Foslien/Getty Images)

RB Eddie Lacy was selected 61st overall by the Green Bay Packers in the 2013 NFL Draft. He exploded on the the pro scene as a rookie, earning a Pro Bowl Bowl appearance, being named second-team All-Pro and winning the NFL Offensive Rookie of the Year. It was a nice change of pace for perennial MVP candidate and future Hall of Fame quarterback Aaron Rodgers to have a threat in the backfield.

The second-round pick posted another good year in 2014. He was turned into a meme 2015 when he showed up to preseason training camp overweight, making waves from ESPN to USA Today. Then-Green Bay head coach Mike McCarthy and the coaching staff weren't too pleased. An ankle injury that snowballed into several other injuries surely didn't help.

Save your jokes, peak Eddie Lacy was one of the toughest runners in the NFL during his time with the Packers. pic.twitter.com/IrAfB5AHGG

The injury woes continued into 2016. Lacy entered free agency at the end of the season.

He inked a one-year, $5.5-million contract with the Seattle Seahawks during the 2017 offseason. He wasn't brought back after a disappointing year.

Lacy finished his NFL career with 3,614 rushing yards and 23 touchdowns.

Lacy proved he was a talented back at Alabama. There were flashes of it in the NFL, too. Whether it was a matchup against the Baltimore Ravens, Arizona Cardinals, Dallas Cowboys, Detroit Lions or NFC north rival Minnesota Vikings, Lacy showed why he made so many 'Bama fans scream "Roll Tide".

Tim Tebow made headlines when he reunited with new Jacksonville Jaguars coach Urban Meyer as a tight end. A Twitter user asked Lacy if he would consider making a similar NFL comeback. He didn't completely rule out the possibility.

In the meantime, Lacy enjoys spending his free time with his family and making appearances on Cameo. Recently, he partnered with mental wellness company Amare Global.

Eddie Lacy seems to be enjoying his time away from the gridiron. The football player last worked out with the Baltimore Ravens in April 2020, and he could still return to the NFL at some point if a team needs a running back.

Even if he doesn't, he'll always be an Alabama Crimson Tide legend.