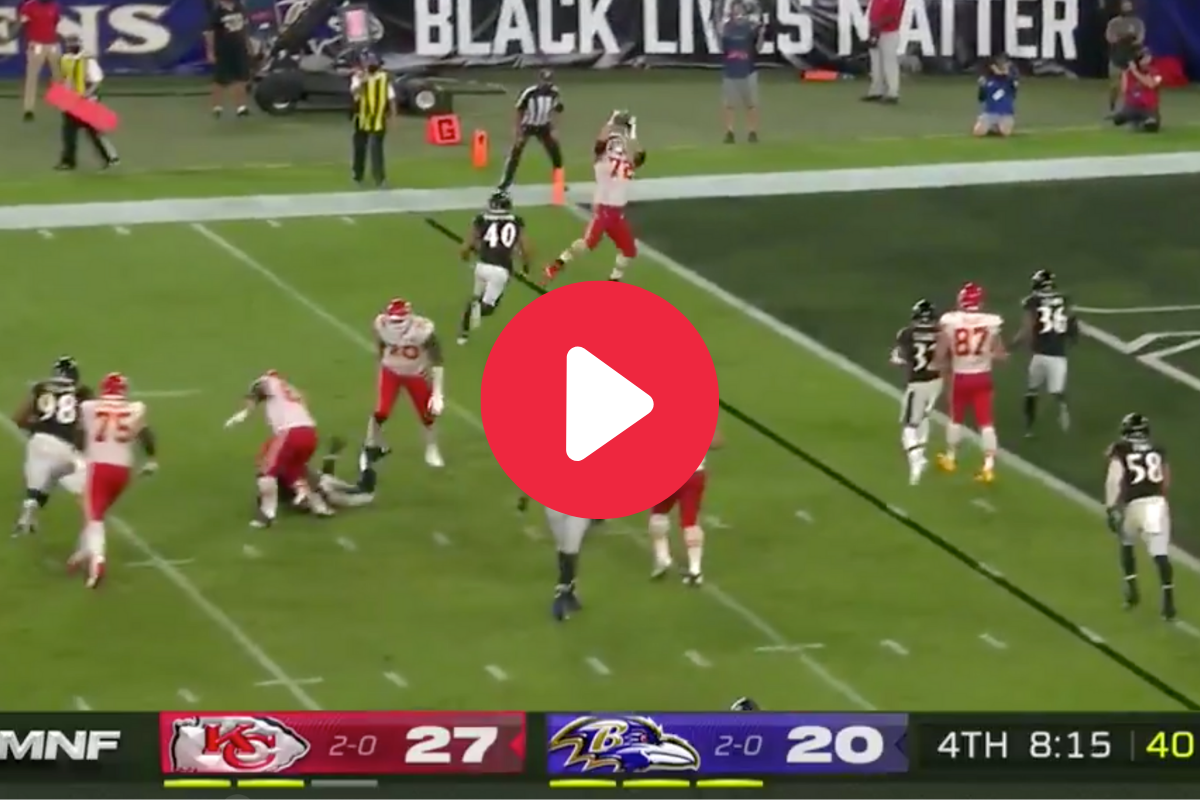 Kansas City Chiefs head coach Andy Reid is an offensive genius. Quarterback Patrick Mahomes is unquestionably one of the best in the business. That combination is dangerous for any NFL defense and it proved to be a big problem for the Baltimore Ravens.

After taking down the Houston Texans and Los Angeles Chargers to start the 2020 season, the Chiefs waltzed into M&T Bank Stadium looking to make a statement on Monday Night Football. Needless to say, they most certainly did.

Winning 34-20 doesn?t tell the whole story. KC was dominant all night. And nothing put an exclamation point on the primetime AFC matchup more than a touchdown pass to offensive lineman Eric Fisher.

RELATED: 350-Pound Pick-Six Gets Capped Off With Swan Dive

Everyone loves a big man touchdown, and those who watched the fourth quarter of MNF got a treat when 6-foot-7, 315-pound offensive tackle Eric Fisher caught the first pass of his NFL career.

Facing 1st-and-Goal from the two-yard line, Fisher planted a solid block before releasing toward the end zone. The moment he turned around, quarterback Patrick Mahomes was ready to release a floating pass so Fisher could easily catch it.

The play was beautiful and put the ESPN game on ice. The hot potato celebration after he scored made it even better.

The reigning Super Bowl champions have so many options on offense. Tight end Travis Kelce, Mecole Hardman, Tyreek Hill, running back Clyde Edwards-Helaire, Sammy Watkins, Darrel Williams and even fullback Anthony Sherman all caught passes from Mahomes on the night. Yet, it was Fisher?s touchdown grab that stole the show and was instantly trending.

Left tackle Eric Fisher, the top-overall pick in the 2013 NFL Draft, made history, too. He became the first No. 1 draft pick to catch a touchdown since Keyshawn Johnson back in 2006.

Chiefs Tackle Eric Fisher is the first No. 1 overall pick to catch a TD since Keyshawn Johnson (2006) pic.twitter.com/zE7m37tyvE

If this was a preview for a playoff game or even AFC Championship Game, the Chiefs definitely have the upper hand. Mahomes was in full MVP form and Lamar Jackson struggled.

The coronavirus pandemic and COVID-19 outbreak has given us so many big things happening in sports. The Lakers in the NBA Finals and the Stanley Cup Finals are a couple of examples.

A big man touchdown lives forever, though, and it deserves the attention.