What Happened to Jim Everett and Where is He Now? 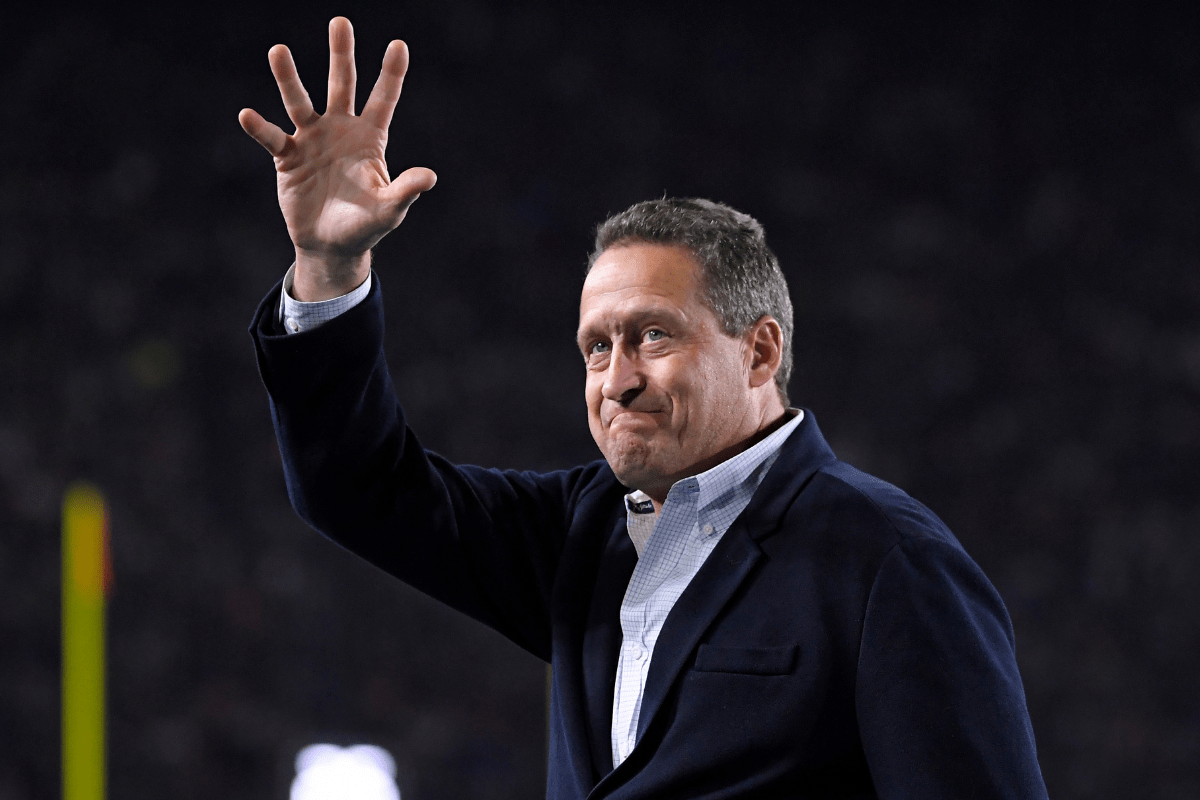 Jim Everett’s journey to becoming a successful NFL quarterback and a fixture for the Los Angeles Rams was not without its fits and starts.

He’s one of those former players who can fall through the cracks. He was certainly good enough to have a long, successful NFL career, but not entirely on the Hall of Fame level.

Everett may not be a California boy by birth, but he has really grabbed onto that Southern California vibe in his playing days and retirement… unless you are a particular talking head who tried to get under the quarterback’s skin one too many times.

Jim Everett was born in Emporia, Kansas, but went to high school in Albuquerque, New Mexico. Shout out to Breaking Bad! Everett eventually moved again and went to Purdue for his college football career.

After a couple of years as a backup, Everett took over as the starter for the Boilermakers for the 1984 campaign. That year, he became the only quarterback in Purdue history to beat Michigan, Ohio State, and Notre Dame in the same season.

During his senior campaign, he led college football in total offense, which he held until Drew Brees came around.

After his college career concluded, Everett would become the first quarterback in the 1986 NFL Draft, going third overall to the Houston Oilers. Yes, we said the Oilers.

Houston already had Warren Moon and was literally trying to goad the Indianapolis Colts, who had already started working on a deal with Everett. The Oilers were hoping they could get something out of the Colts, but that ploy didn’t work.

Not happy with the low-ball contract the Oilers were offering him, Everett decided to hold out. Eventually, the Rams beat out the Green Bay Packers and the San Francisco 49ers for his services. The man was on the move once again!

1987 week 1@Jim_Everett with a rough first outing against the team that drafted him, and with 1 minute left he had to drive 80 yards (or less depending on Mike Lansford's range) for a score. Started well with a 20-yarder to Henry Ellard, but HOU hung on pic.twitter.com/0dDecILJAu

Everett started only part of his rookie season, but eventually, he rounded into one of the better quarterbacks in the NFL. During the 1988 and 1989 seasons, he led the NFL in passing touchdowns. The Rams quarterback did not pull that off again in 1990, but he made his one and only Pro Bowl that year.

Things took a turn in 1993, when interceptions led head coach Chuck Knox to bench him. Before the 1994 season, the Rams dealt him to the New Orleans Saints.

Everett rebounded a bit as he got back to throwing more touchdowns than interceptions. However, the Saints would not sniff the playoffs in Everett’s three seasons under center. He would move on to the San Diego Chargers for one season, though he only made one start with them in 1997 before retiring.

If you don’t know who Jim Rome is, well, first off, lucky you. We are unfortunately all too aware of the profoundly tedious radio and TV host Jim Rome.

Rome is the kind of guy who would rail against soccer in an ethnocentric way well after the sport became a popular sport in the U.S. He also felt Everett was too opposed to being hit.

He took to calling Jim “Chris Everett.” This was about the female tennis player Chris Evert. See, the joke was that Everett was like a girl! Which is very cool and definitely not misogynistic all, no sir. Nothing to see there.

In 1994, Everett decided to go on Rome’s ESPN2 show Talk2. Immediately Rome called him “Chris,” at which point Everett dared Rome to do it again. Rome did, and the altercation got physical, with Everett pushing the ESPN talking head to the ground.

According to an interview with Deadspin, this moment became so infamous that an unnamed “large burger franchise” wanted to use the footage for a commercial. Everett signed off on it, but Rome did not.

He remains, to the very end, the absolute worst.

Jim Everett came from a family of academics, so he decided to go back to school when he retired. He ended up getting an MBA from Pepperdine University in Malibu (what a place to go to college).

With a graduate degree in tow, Everett started an assets management company, which he ran until retiring in 2014.

Having settled down in Southern California, Everett didn’t have much to do with his old franchise until the Rams moved back to LA from St. Louis. The former Rams quarterback began popping up at team practices and events, serving as a living legend.

After all, he’s still the franchise’s all-time leader in passing yards. Yes, even ahead of Kurt Warner.

While Everett never led the Rams to a Super Bowl — though they did make it to one NFC Championship Game — he had an enviable NFL career. Plus, he made Jim Rome look like a chump. That’s almost as good as winning a Super Bowl ring.

MORE: What Happened to Warren Moon and Where is He Now?