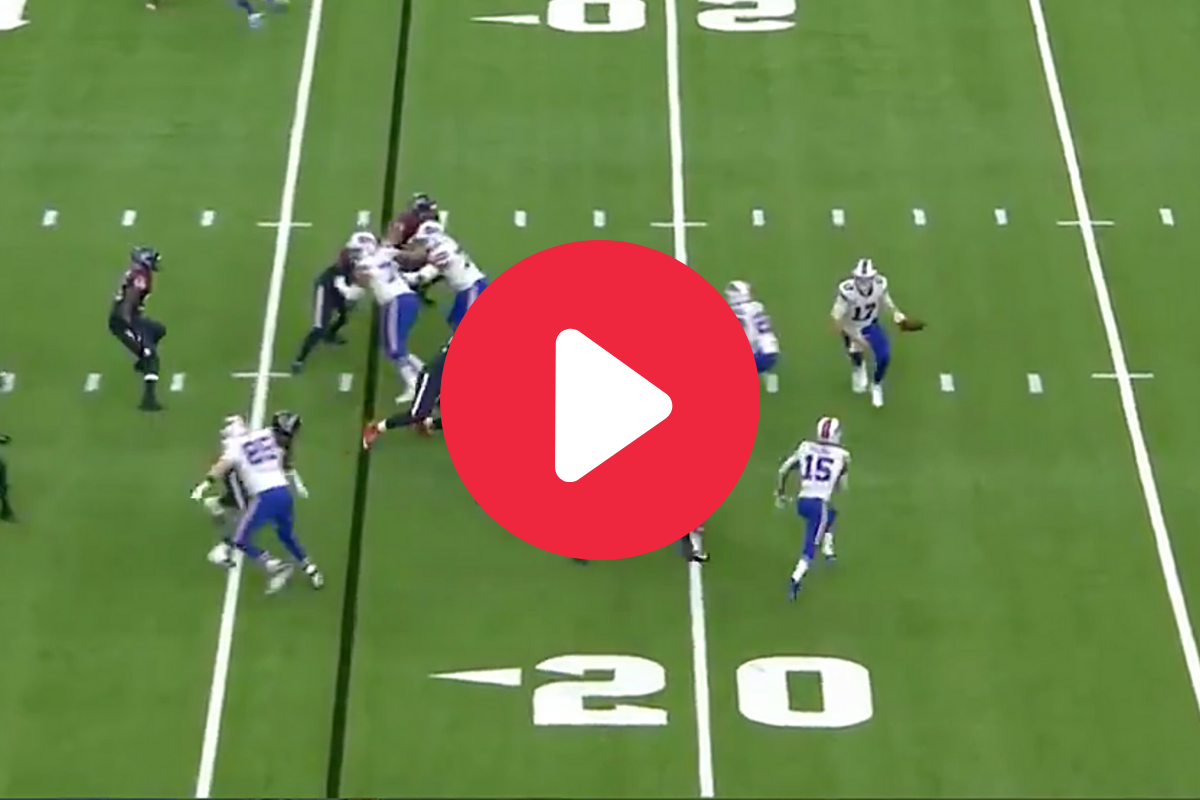 Unsurprisingly, Allen and the Bills set off fireworks almost immediately after kickoff in the opening drive.

Allen showcased his wheels and receiving abilities as the Bills offense pulled off the Buffalo Special, a trick play in which they faked a handoff and tossed the ball to wide receiver John Brown. Allen snuck down the sideline and hauled in a 16-yard touchdown to complete the awesome play give Buffalo a 7-0 lead in the first quarter.

Allen, known for his athletic ability despite his massive 6-foot-5 frame, also added a 42-yard run in the drive, giving way to the touchdown-scoring trick play to begin the first half.

He racked up 510 rushing yards and nine rushing touchdowns in the regular season.

The Brown-to-Allen touchdown wasn’t the first trick play the Bills have pulled off this season.

On Thanksgiving, they pulled off a similar play against the Dallas Cowboys that also resulted in a John Brown touchdown pass. That one fell into the wide open hands of running back Devin Singletary.

Saturday afternoon’s AFC Wild Card playoff game also marked the return of three-time NFL Defensive Player of the Year and Houston Texans defensive end J.J. Watt, who is playing in his first game since suffering a torn pectoral in October.

Watt isn’t the only star athlete on the gridiron for this Bills vs. Texans bout. Two All-Pros are going head-to-head in Texans wide receiver DeAndre Hopkins and Bills cornerback Tre’Davious White, whose six interceptions are tied for most in the NFL.

Both teams are vying for a Super Bowl run despite limited playoff success. The Bills, led by head coach Sean McDermott, haven’t won a postseason game since 1995. The Texans, coached by Bill O’Brien, fell to the Indianapolis Colts in the 2018 playoffs and have never won more than one game in a single postseason.

NFL Wild Card Weekend wraps up with a Saturday night matchup between the Tom Brady-led New England Patriots and Tennessee Titans on CBS at 8:15 p.m. ET. Sunday’s slate features NFC games in the Vikings-Saints and and Seahawks-Eagles.

This post was originally published on January 4, 2020, but a trick play like this deserves to be seen again.

MORE: 1-Point Safety: How the Only One in NFL History Almost Happened