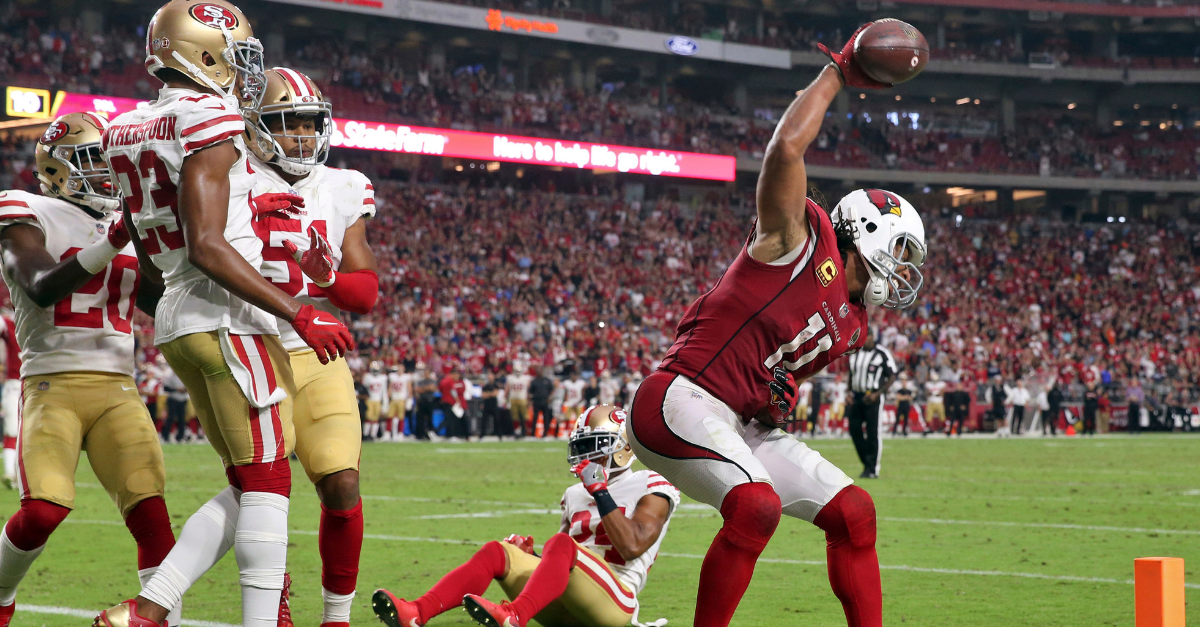 Touchdown celebrations have brought life back to the party of the NFL end zone. With scoring on the rise, more and more players are finding their way to pay dirt this season, and that means plenty more one-of-a-kind celebrations to come.

Arizona Cardinals wide receiver Larry Fitzgerald, one of the most well-spoken and humble football players in the game, helped lead his team to its second win of the season over the San Francisco 49ers on Sunday. After scoring a critical two-point conversion late in the game, Fitzgerald wound up and spiked a football the first time ever, and his reason behind finally doing it is the biggest dad-move of the century.

The third-overall pick in the 2004 NFL Draft has spent all 15 of his professional seasons as a member of the Cardinals in Glendale, Arizona. From his time in college playing for the Pittsburgh Panthers through the present, Fitzgerald has never spiked a football following a score.

You’re probably familiar with the famous “Gronk Spike,” or any of the thousand other times a football’s been spiked by a neighborhood kid, but somebody who scored the 112th receiving touchdown of his career against the 49ers, and previously scored 34 of them in college, had never once spiked a football.

RELATED: Arizona Fired Their Offensive Coordinator Before He Had His Breakfast

Fitzgerald’s two-point conversion capped a day in which he caught eight passes for 102 yards and a touchdown reception from quarterback Josh Rosen, which broke a tie with Tony Gonzalez for the seventh-most receiving touchdowns in NFL history.

The reason behind Fitz’s spike? Well, he cracked a smile and explained what made his newly found celebration even more perfect.

“Never spiked a ball before in my life. I was a little frustrated and had a heavy heart today. My son Devin, my oldest son, didn’t want to come to the game today. My feelings were a little hurt. I was carrying that around all day, so when I got in there I kind of let it out. So all the kids that were watching, I’m sorry I set a bad example today.”

“He didn’t want to come and support us, so I’m trying to pick up the pieces. I got to be a better father.”

“He chose to go to the [Arizona] State Fair, so I’m still a little disturbed by it, but I’ll get over it.” — Larry Fitzgerald

Leave it to one of football’s greatest receivers of all time to wait until his son chose the Ferris wheel over his dad’s game to throw down a spike.

The 11-time Pro Bowl selection and 2016 Walter Payton Man of the Year remains an incredible ambassador for the game of football, and he made sure to start his post-game conference by sending condolences families from the city of Pittsburgh following the senseless murders as the Tree of Life synagogue on Saturday.

Arizona (2-6) heads into their bye week with momentum on their side following a much-needed win, and it looks like Larry Fitzgerald might be heading to the State Fair on his own after his son missed the Cardinals biggest win of the season.