Green Bay Packers head coach Matt LaFleur is off to a raging start in his new gig. The third-year American Football coach on the sidelines in Lambeau Field led his NFC North squad to a 13-3 record in his first season, winning a divisional playoff game against the Seattle Seahawks before losing the NFC Championship to the San Francisco 49ers, who lost in the Super Bowl. He then followed that up with another 13-3 record in 2020. Sure the Packers fell once again to the 49ers in the NFC Divisional Round last year, but Green Bay is never a team to count out.

The future looks bright in Wisconsin. The 41-year-old LaFleur, who took over for Mike McCarthy in 2019, is one of the youngest football coaches in the NFL alongside names like Sean McVay and Kliff Kingsbury. Quarterback Aaron Rodgers is only four years younger than his head coach.

As LaFleur has been thrust into the national spotlight, many fans have wondered about his personal life. To the ladies hoping he was still a bachelor, the good-looking coach has a wife and two kids.

After a successful head coaching debut, Matt LaFleur leaves Soldier Field with wife Bre and parents Denny and Kristi. Look for all of them to appear in my story, which will post in a few hours ?? @packers @nflnetwork @nfl @AroundTheNFL pic.twitter.com/a0Jyn3zBs7

Matt LaFleur is married to BreAnne LaFleur. She was originally BreAnne Maak before taking Matt's hand in marriage. BreAnne has been alongside Matt for a long time and has relocated all over the country during his football coaching career. A little bio of BreAnne: She was born in 1983 to her parents, Jane Marie and Irvin Maak Wener

According to The Tennessean, BreAnne used to sell pharmaceuticals when the two lived in Ohio. She made decent money doing it but was forced to give up her job so they could move to Houston. 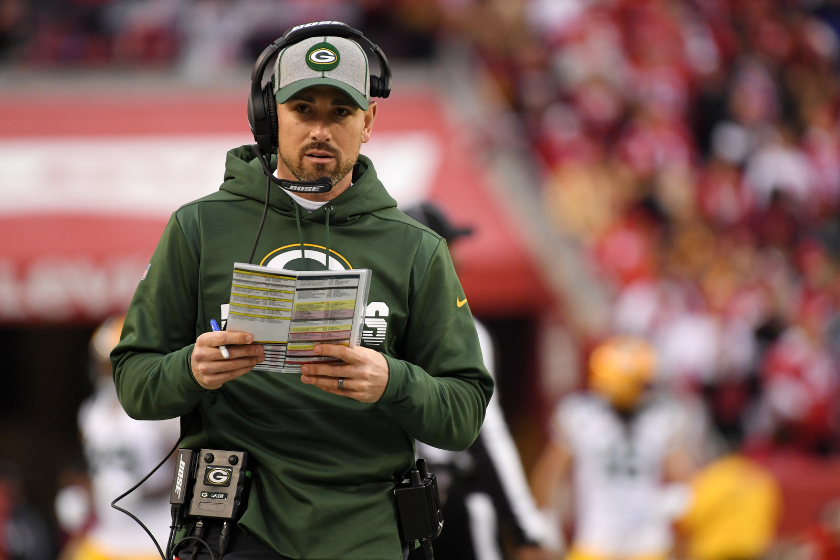 LaFleur's break in the National Football League came with the Houston Texans in 2008. He helped coach wide receivers and quarterbacks under offensive coordinator Kyle Shanahan. He then became the quarterback coach of the Washington Redskins, Notre Dame Fighting Irish and Atlanta Falcons before serving as OC of the Los Angeles Rams and Tennessee Titans football teams.

In 2010, he and his wife talked to MLive.com about joining Washington's coaching staff.

"There's a lot of work to do," she told the website. "I have a career (as a pharmaceutical representative), where there aren't a ton of jobs available. Hopefully I can find a position where I can transfer. Then we have to get a moving company...It'll be one of the easier moves we've made since I won't have to do everything."

"(My wife and I) are lucky to be going to another great organization," LaFleur told MLive.com. "The Redskins have been very helpful. They're putting us up for a time while we search for a new place to live."

Matt and BreAnne have two young sons together: Luke and Ty.

BreAnne posts to her Facebook and social media often about them. In June 2017, she wished Matt a happy Father's Day:

"Happy Father's Day to the main men in my life!! I am beyond blessed because of the impact you have all made on me!! I can't thank you enough for everything you do for me and my boys!!! We love you Daddy, Big Papa, and Papa D!!!" she wrote.

Apparently, the family is very close with Matt's younger brother, Mike LaFleur, who served as the passing game coordinator for the 49ers in 2020 before becoming the New York Jets offensive coordinator this season. When the two brothers faced each other in 2019, BreAnne and their two sons stayed with Mike at his California house, per ESPN.

Matt and Mike's parents, Kristi and Denny LaFleur, are likely the reason the family is so football-focused. Their father played linebacker at CMU while Kristi was a cheerleader, per Heavy.com. They both then worked as physical education teachers.

Relatively new head coach Matt LaFleur likely has a long career ahead of him in the NFL. Whether it will be with the Packers in Wisconsin or somewhere else, there's no doubt his wife and kids will be by his side.

This article was originally published on September 24, 2021, and has been updated since.

MORE: Aaron Rodgers Whined. The Packers Gave In. Now, He Owns the Team.