The 1 Question Everyone Is Asking About Each NFC Team 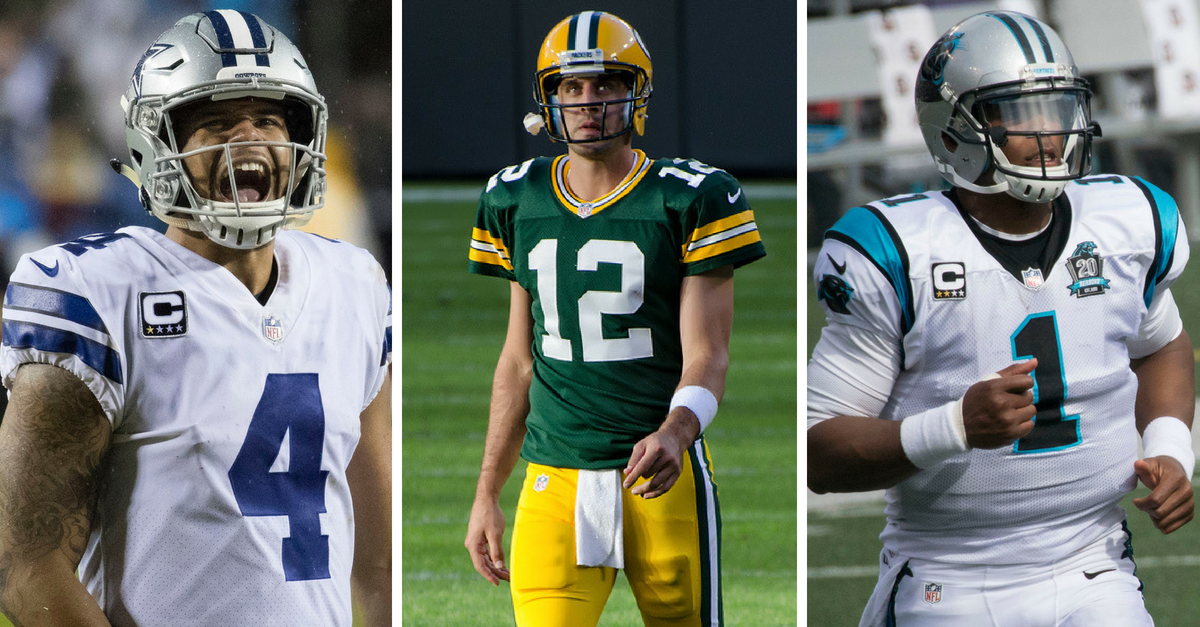 Before the NFL season kicks off on September 6th, when the World Champion Philadelphia Eagles host the Atlanta Falcons, questions loom over every team as the 2018 season draws closer. New faces, monster contracts and redemption are on the table with a fresh batch of football on the horizon.

Get ready, football fans. Here are the biggest questions facing every NFC team in 2018.

Year two under Trubisky is going to be make-or-break for the Bears going forward. With the addition of pass catchers Allen Robinson, Taylor Gabriel, and Trey Burton, the already solid Bears running attack has the pieces in place to help Trubisky mature in 2018. Consistency is the name of the game for Chicago coming off a five win season, and No. 10 will have a lot of momentum going forward if Chicago can climb back into relevancy in the NFC North.

Detroit Lions: Will the Matt Patricia experiment pay off?

An offensive minded franchise went out and lured the former Patriots defensive coordinator to Michigan. What did Patricia do in his first draft? He drafted Arkansas center Frank Ragnow 20th overall, traded up in the second round to take Auburn running back Kerryon Johnson, and ended by taking a fullback in round seven. Patricia drafted heavily along both the offensive and defensive lines, signaling a shift in culture for the Lions. Time will tell if the former Belichick understudy can make some noise in the NFC.

Green Bay Packers: Are they the best team in the NFC?

After a 7-9 finish, Green Bay is retooled and prepared to make a run at the NFC crown once again. The addition of Jimmy Graham gives Aaron Rodgers a new toy to throw to, particularly in red zone situations. Health seems to be the main factor for Green Bay year after year, and seems to be the only thing standing in their way. Adding former Jets defensive Muhammed Wilkerson, and drafting cornerbacks Jaire Alexander and Josh Jackson back-to-back, leaves few holes in the Packers defense as well. Rodgers and an experienced Packers team are primed for a big season.

Minnesota Vikings: How fast can Kirk Cousins assimilate into the offense?

Signing Cousins to a bonkers $84-million guaranteed contract means it’s Super Bowl or bust for a loaded Minnesota team over the next few seasons. Returning a majority of its team that went 13-3 in 2017, including getting back a healthy Dalvin Cook at running back, means the Vikings have no excuses to repeat as, at minimum, a Wild Card team. Cousins earned his money playing under the franchise tag for Washington, and now it’s his time to prove if the wait, and the money, was worth it.

Atlanta Falcons: Is it finally time?

The Falcons gave Matt Ryan a five-year, $150 million extension in May, solidifying the Boston College alums place in Atlanta for a while longer. After drafting Alabama wide receiver Calvin Ridley to compliment Julio Jones and Mohammed Sanu, there aren’t any holes left on the offensive side of the ball. The defense is set with Pro Bowl talent and a talented front seven. Is this finally the year Ryan lifts them into another run? Or is the 28-3 Tom Brady curse going to loom over the franchise for another season?

Cam Newton leads the Panthers offense that loses leading rusher Jonathan Stewart. In Stewart’s place, the diminutive workhorse Christian McCaffrey looks to prove his worth in season two. Rest assured though, Newton’s 59.1 completion percentage and 16 INTs will need to improve for Carolina to win the NFC South. Carolina’s All-Pro middle linebacker Luke Kuechly is the glue of the Panthers defense, which loses 11.0 sacks in 2017 from Julius Peppers. They’ll need a full, healthy season from Kuechly to knock off the offensive juggernauts Saints and Falcons in their own division.

In 2017, New Orleans sent two running backs to the Pro Bowl for the first time in 42 years, with both Mark Ingram and Alvin Kamara surpassing 1,500 yards from scrimmage. Drew Brees threw for the fewest yards and touchdowns of his Saints career, but only threw eight interceptions; that’s his lowest total since 2004 with the Chargers. Trading up to take Marcus Davenport in the first round to pair with Cameron Jordan gives the Saints defense a pair of weapons to send at quarterbacks all season long. We’ll see if 2017’s Saints can capitalize with another division title in 2018.

Always make sure my back ends add up.. Respect from my peers means the most 🤞🏾 #nfltop100

Tampa Bay Buccaneers: What will they do at quarterback?

The chips were in place last year for Jameis Winston to become a top-flight quarterback. Instead, posted a QBR of 50.3, turned the ball over 21 times, and the Buccaneers went 5-11. Now, Winston will be suspended the first three games of the season, and many people are calling for a permanent quarterback change. Quietly, though, Tampa Bay sured up its defense, signing Jason Pierre-Paul and drafting Vita Vea 12th overall out of Washington. Tampa Bay has a shot to knock off a few teams in 2018, but they look to be too far from consistent to be a contender in, arguably, the NFL’s strongest division.

Dallas lost Dez Bryant, which no one was really shocked about. Losing veteran Jason Witten leaves a massive hole at tight end. Signing Allen Hurns and drafting Michael Gallup in the third round are major steps in the right direction, but will that, and a full season of Ezekiel Elliot, be enough to help Prescott and the Cowboys win the NFC East once again? A defense predicated on the health of Sean Lee, and an offense in transition is a scary thought for Dallas fans hoping to see more of the 13-win Cowboys from 2016 and less of the 9-win team a season ago.

Eli Manning only has a few seasons of football left, and the Giants are squeezing everything they have out of it. Drafting Saquon Barkley second overall is the reflection of their confidence in the last Manning. Bringing back a healthy Odell Beckham, Jr. to play alongside Sterling Shephard and Evan Engram gives Eli a plethora of weapons to choose from. On defense, signing Alec Ogletree from Los Angeles finally gives Pro Bowl safety Landon Collins some help a defense that ranked near the bottom of the league in 2017. The clock is ticking on this version of the Giants, but the pieces are in place.

Following their Super Bowl win, the keys to the car are back in Carson Wentz’s hands. In a relatively quiet offseason, Philly added pass catcher Mike Wallace and drafted big tight end Dallas Goedert to pair with Zach Ertz. Nursing a few injuries, like All-Pro tackle Jason Peters’ needing MCL and ACL surgery, Philadelphia has a Lombardi Trophy sized target on their backs in 2018. Just for laughs, the NFL conveniently scheduled an Eagles versus Patriots preseason game on August 16th.

Washington delayed giving Kirk Cousins a big contract, but didn’t hesitate to give Alex Smith a 4-year, $94 million deal when he came over from Kansas City. Drafting Derrius Guice in the second round means Washington must feel comfortable with Smith throwing to Jamison Crowder, Paul Richardson, Josh Doctson and, the Glass-Man, Jordan Reed in his first season in D.C. Smith never received credit for his years in Kansas City, and now he’s being given the keys to an even taller task in Washington.

Arizona Cardinals: Who is the third option on offense?

The core for the Cardinals, depending on their health, will be Sam Bradford, David Johnson, and Larry Fitzgerald. Outside of Johnson and Fitz, the Cardinals face an uphill battle to find another option. Brice Butler comes over from Dallas after 15 catches in 2017, J.J. Nelson steps into the slot receiver role after 29 catches last year, and tight end Jermaine Gresham will look to improve on a sub-par season a year ago. It’s slim pickings in the desert, with rookie Josh Rosen on the horizon should Bradford’s continue to fall apart.

Los Angeles Rams: Who is going to play linebacker?

Los Angeles made splashes across the league, getting cornerbacks Marcus Peters and Aqib Talib, while signing Ndamukong Suh to pair with Aaron Donald. But Sean McVay’s staff forgot about they have to play linebackers, too! The only returning starter of the group is Mark Barron, a converted safety, and among the rest of the linebackers on the roster, none is higher than a fourth-round pick. The offense is going to be good once again, poaching Brandin Cooks from New England, but there’s a massive hole in the middle of their 3-4 defense.

San Francisco 49ers: Are they for real?

The Jimmy Garoppolo experiment enters 2018 with huge expectations after finishing last season on a five-game win streak. The 49ers brought in Jerick McKinnon at running back to replace the departed Carlos Hyde, but return most of their top pass catchers from last year; they even drafted Washington’s Dante Pettis in the second round. Drafting Mike McGlinchey ninth overall to play tackle opposite All-Pro Joe Staley gives San Francisco one of the NFC’s top offensive lines, as well. Oh, and Richard Sherman is still in the NFC West. They’re not perfect yet, but Kyle Shanahan’s group has all the makings of a Wild Card team in 2018.

New Chapter! Excited for the future! Looking forward to putting it on tape!

Seattle Seahawks: How did they get better?

Losing Richard Sherman, Kam Chancellor and Michael Bennett signals a shift in Seattle’s former self. Earl Thomas and Bobby Wagner remain on defense, and the addition of Barkevious Mingo should help cover some of the losses. Otherwise, Seattle didn’t do much except lose players in the offseason. They drafted Rashaad Penny near the end of the first round to fill their hole at running back, but durability at the NFL level surrounds the San Diego State alum. Signing former Panthers tight end Ed Dickson gives Russell Wilson some help in the passing game, too. They should be good again, but can they still be elite?