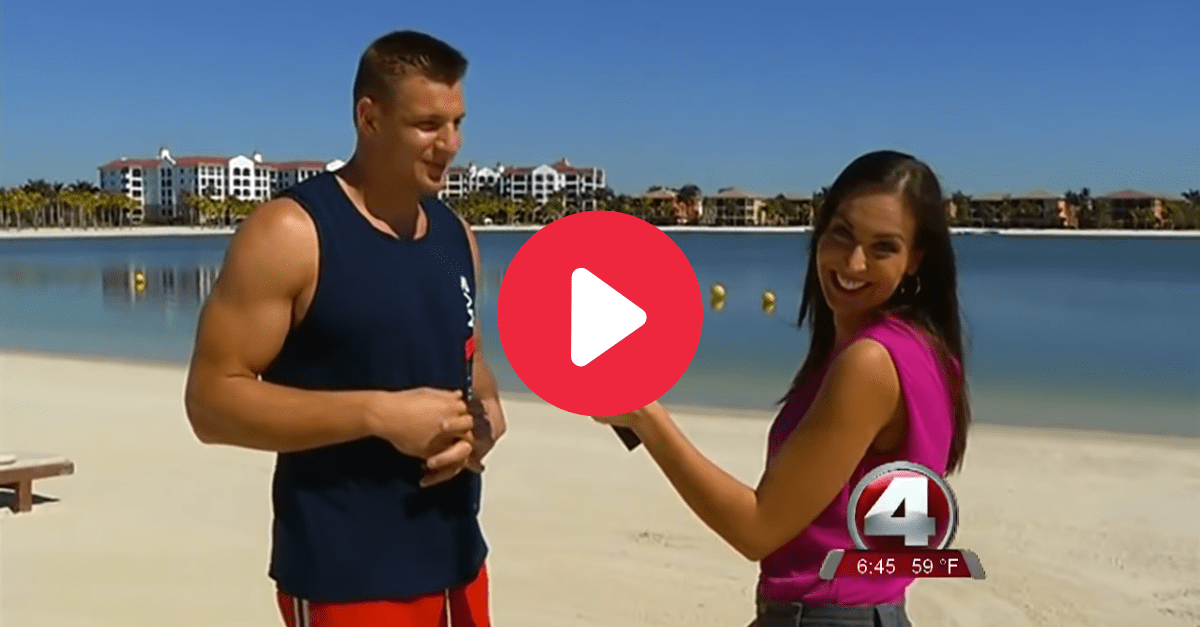 Former New England Patriots tight end Rob Gronkowski is every reporter’s dream. When he wasn’t butt-naked in the locker room for all to see, he’s a fun-loving goofy guy who says what comes to mind exactly when it pops into his head.

I mean, who wouldn’t want to interview a three-time Super Bowl champion whose side gig in college was stripping? We’re talking about a man who played for the stoic Bill Belichick, caught 79 touchdowns from Tom Brady and has shaken his booty with the Los Angeles Laker Girls and performed “I’m Too Sexy” on national television.

Gronk might wind up being more legendary off the field than he was on the field, and that’s saying something considering his NFL career is worthy of the Hall of Fame.

The former player has done hundreds of interviews over the years since the Patriots selected him in the 2010 NFL Draft out of the University of Arizona. The best, however, may have taken place when he was shirtless on a Florida beach in 2015.

A reminder that Gronk’s flirt game is off the charts.

Gronkowski was just minding his business soaking up some sun rays in Southwest Florida when WFTX reporter Tara Molina caught up with him on the beach in February 2015.

Gronk, fresh off a Super Bowl victory over the Seattle Seahawks, had just completed his Comeback Player of the Year season in which he posted more than 1,100 receiving yards and 12 touchdowns.

Gronk was still celebrating his Super Bowl title at the time in the offseason, but apparently the 25-year-old football star didn’t mind Molina asking him what he was doing for Valentine’s Day.

“What are you doing for Valentine’s Day?” Molina asked.

“Woah, woah. What are you doing?” Gronk asked with a smile.

Wait just a second, Tara. What the heck happened when the cameras were off? Did you guys go out for Valentine’s Day or not? The people need to know.

Anyway, this is classic Rob Gronkowski. This actually looks like a tame Rob Gronkowski, because I’m sure he’s said a lot worse and a lot more provocative to the ladies. Of course, this wasn’t exactly your standard ESPN-type interview either.

Since retiring, Gronk has dabbled in the CBD industry with CBDMedic and signed with and made appearances on WWE. There’s no telling what the Gronkster is going to do next, but it probably won’t involve playing football.

If you ask me, that’s perfectly fine.

This article was originally published on February 13, 2015, but flirty Rob Gronkowski never goes out of style.