Taysom Hill is Valuable, But Not Worth Franchise QB Money 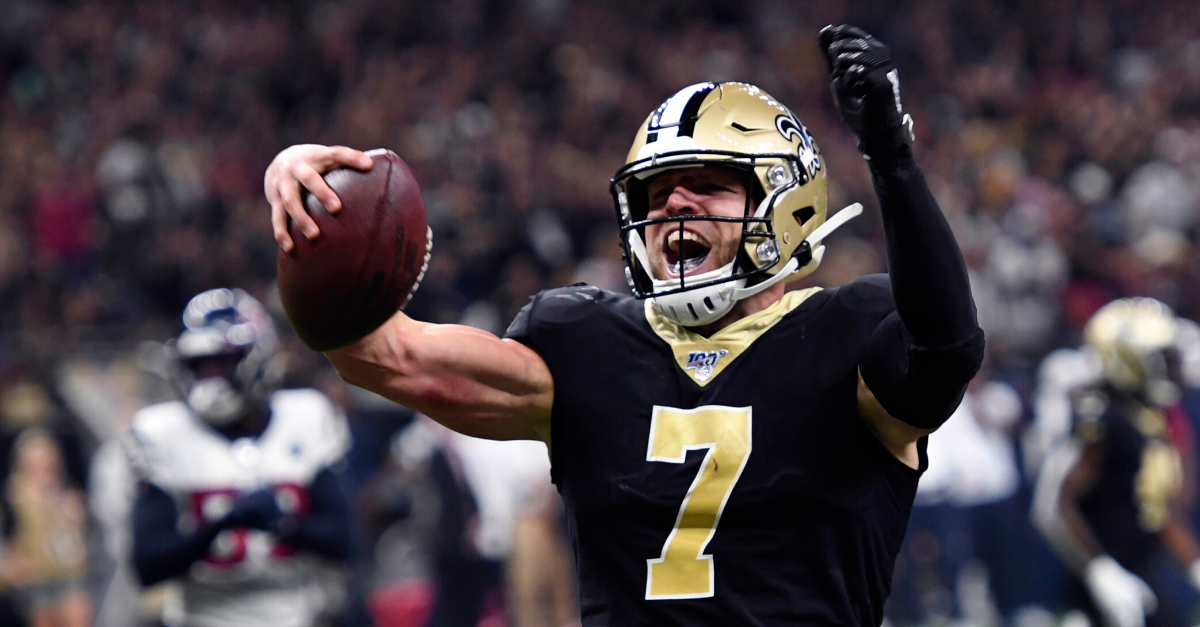 Look, it’s easy to fall in love with Taysom Hill. Call him the master-of-all-trades or the human Swiss Army knife or whatever you like. Hill possesses athletic gifts that even Tom Brady or Drew Brees can only dream of.

The fact that he’s even reached his current role as New Orleans Saints utility player/third-string quarterback is impressive enough. Hill suffered numerous injuries while playing quarterback in college at Brigham Young University but still proved he was a freak athlete by running the 40-yard dash at BYU’s pro day almost a full second faster than Brady ever did.

But let’s get one thing straight: Taysom Hill is not a franchise quarterback. No matter what he or any respected media member or any talking head you see on TV says. Sean Payton and the Saints would be silly to oust Brees in favor of Hill.

Hill sat down with the Rob Maaddi of The Associated Press for a podcast interview during Super Bowl week and was very clear about his future.

Is Taysom Hill a Franchise Quarterback?

I see Taysom Hill trending. He told me Super Bowl week: "I definitely view myself as a franchise QB. .. If New Orleans don't view me that way then I have to leave." Also he loves playing with Drew Brees, hopes to continue doing so. Full interview: https://t.co/CZvuLzPHyQ pic.twitter.com/KQLpsWuYAH

This is coming from a guy who has attempted exactly (wait for it) 15 passes in 35 NFL games over his two-year professional career. Even better is that none of those resulted in touchdown passes. Oh, and he turns 30 in August.

OK, maybe that’s not totally fair. Aaron Rodgers didn’t start a game in his first three seasons with the Green Bay Packers because he too had a Hall-of-Fame quarterback blocking him in Brett Favre.

But Rodgers was a first-round pick out of California and viewed as the heir apparent in Wisconsin whereas I don’t think the Saints view Hill in that way.

Otherwise, wouldn’t they protect him a little better and mold him into a polished signal caller rather than running him out onto the field as a wide receiver, running back, tight end and whatever else head coach Sean Payton can think of?

Plus, shouldn’t he at the very least have been Brees’ backup quarterback and higher on the depth chart than Teddy Bridgewater, who, by the way, was terrific in place of Brees during the 2019 season?

"I have loved every second of my time (in New Orleans). So do I want to leave?…no, I don't… I want to play quarterback in this league, & if New Orleans don't view me that way, well then I have to leave. That's really where we're at."

As Pro Football Talk explains, though, the new team offering Hill would likely forfeit a first-round draft pick. That’s a more-likely scenario for a team picking in the latter half of the first round of the NFL Draft (like the Bills, Patriots, Saints or Vikings, for example).

Payton told Football Morning in America‘s Peter King he anticipates a team making an offer to the multi-faceted football player, however. He also said he’d like to continue coaching Hill.

“He was a valuable [waivers] claim for us,” Payton told King. “Like gold bullion.?

After the Packers signed Hill as an undrafted free agent in 2017 and waived him in September of the same year, the Saints claimed him and struck gold.

Not many players can do what Taysom Hill can. Lining a guy up anywhere on the gridiron and not knowing what he’s going to do can give opposing defensive coordinator fits. Heck, he even plays special teams for the Saints.

That’s why he shredded the Minnesota Vikings in last season’s NFC Wild Card playoffs round for 50 rushing yards, 50 passing yards, 25 receiving yards and a touchdown reception in the 26-20 overtime loss.

Hill is a unique commodity.

Saints general manager Mickey Loomis knows this, and that’s why he’s not approaching Hill the same way he would for another player.

“He’s unique,” Loomis told Nola.com. “So if something?s unique, you have to approach it a little differently.?

However, it’s not why he deserves to take over as a team’s first-string quarterback and it certainly doesn’t make him a “dynasty quarterback.” At least not yet. He hasn’t shown he’s a capable enough passer yet.

On the flip side, though, Hill should 100 percent field as many offers as possible in free agency. He should tell teams he’s a starting quarterback. Why? Because that’s where the money is at. If Nick Foles can fetch $50 million guaranteed from the Jacksonville Jaguars, then I don’t blame Hill for trying to do the same.

As I said, Hill is easy to fall in love with when you watch him. His blend of speed, strength and tenacity is exciting. It’s reminiscent of old-school football.

Unsurprisingly, he was a football, basketball and track star at Highland High School in Idaho. In his best season at BYU, when he was healthy, he threw for 2,938 yards and rushed for another 1,344 in 2013. The Cougars went 8-5 that year.

If Tim Tebow couldn’t make it in the NFL, are we really sure Taysom Hill can?

I’m not saying I don’t think Hill isn’t an exceptional athlete. He is. I’m just saying he’s not a franchise quarterback, and he damn sure shouldn’t be paid like one.

MORE: The 9 Highest Paid Backup Quarterbacks in the NFL