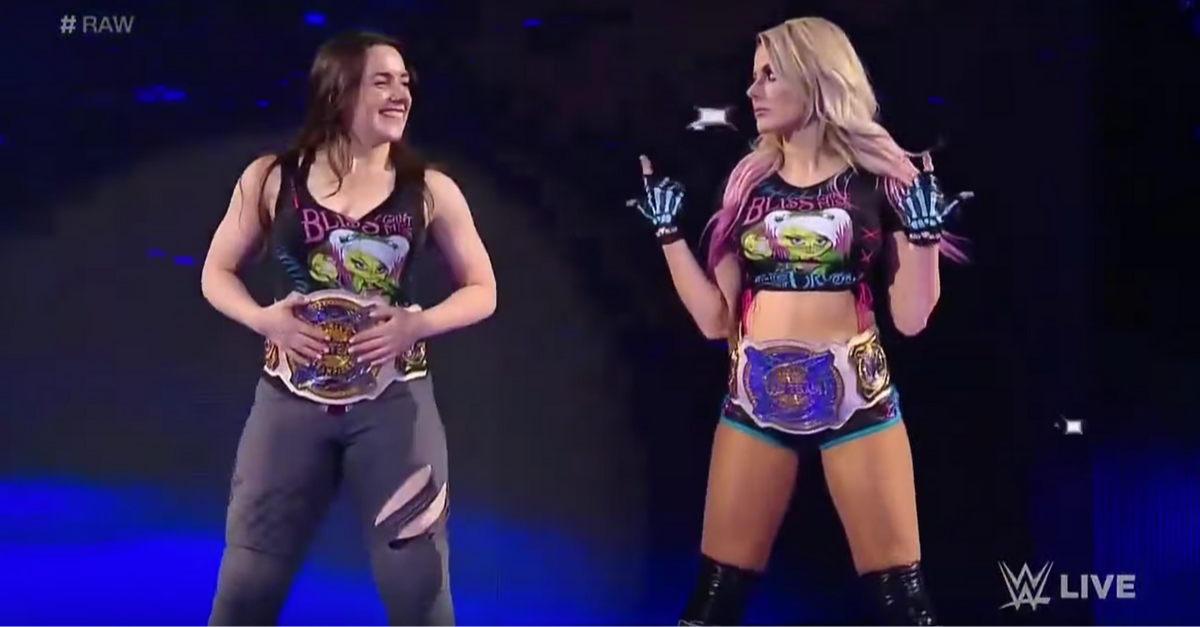 The duo of Alexa Bliss and Nikki Cross is one of the most popular, yet strange bedfellow teams in women’s tag team history. For several years, Bliss has been on the most villainous characters in the WWE. However, her popularity as a women’s competitor led to three reigns as Raw Women’s Champion and two reigns as SmackDown Women’s Champion.

At only 28, Bliss has become one of the most accomplished female stars in the history of WWE, with only six years of professional wrestling experience under her belt.

Despite her success as a heel, WWE took a different, but peculiar, route with Bliss’ character in 2019. After missing some in-ring time due to a concussion, Bliss started her 2019 off with being a part of the Women’s Royal Rumble match. After competing on some live events, she returned to television action on the night after WrestleMania, defeating Bayley.

As a result of being forced to miss the Money in the Bank match due to not being medically cleared, Bliss was replaced by Nikki Cross. Initially, the relationship between Bliss and Cross seemed to lead to Bliss turning her back on her protege. However, for a number of weeks, Cross was defending Bliss, even when she was using less-than-favorable tactics in her matches.

This alliance led to the two winning the Women’s Tag Team Championship on Monday Night Raw, defeating The IIconics, as well as The Kabuki Warriors (Asuka & Kairi Sane), and Mandy Rose & Sonya Deville in a four-way elimination match. They retained their titles on the SummerSlam kickoff show.

How Long Will This Unlikely Pair Last?

Interestingly, WWE is keeping Bliss and Cross together, as they ran out on the episode of WWE Raw following HIAC to fight the new champs, keeping their focus on the tag titles. While it looked like this tandem was eventually going to lead to Bliss turning on Cross, the team has gelled well together, and will most likely compete in a rematch for the Women’s Tag Team Titles.

It is unclear when the title match will occur, or even if it will occur at all. However, with Cross and Bliss still keeping themselves in the title picture, running out to fight the champions on Raw keeps them as top contenders. With the WWE Draft on WWE SmackDown, this may end the alliance between to two. If it does, there are several other female wrestlers who would be interested in winning the championships, including names such as Carmella, Ember Moon, Bayley, Sasha Banks, and even potentially the current Raw Women’s Champion, Becky Lynch.

Bliss & Cross initially started off as heels, but now seem to be a babyface tag team. Bliss staying in a tag team could reduce a possibility of her getting concussed again, especially since it is very clear that Vince McMahon sees Bliss as a top WWE star, and have seen her in that role for quite some time in both NXT and on the main roster.

Initially Alexa Bliss & Nikki Cross were supposed to be on the Raw brand. However, Triple H made an announcement that the team is being traded to SmackDown.

Since they are still being drafted as a team, it looks like WWE is keeping them together for the time being. Since Bliss is such a natural heel, it will not be a surprise in she turns on her “best friend” sooner than later.

However, the WWE Universe may be surprised by seeing them as a team for longer than expected.