WWE Draft: 5 Superstars Who Should Move to Raw or SmackDown Live 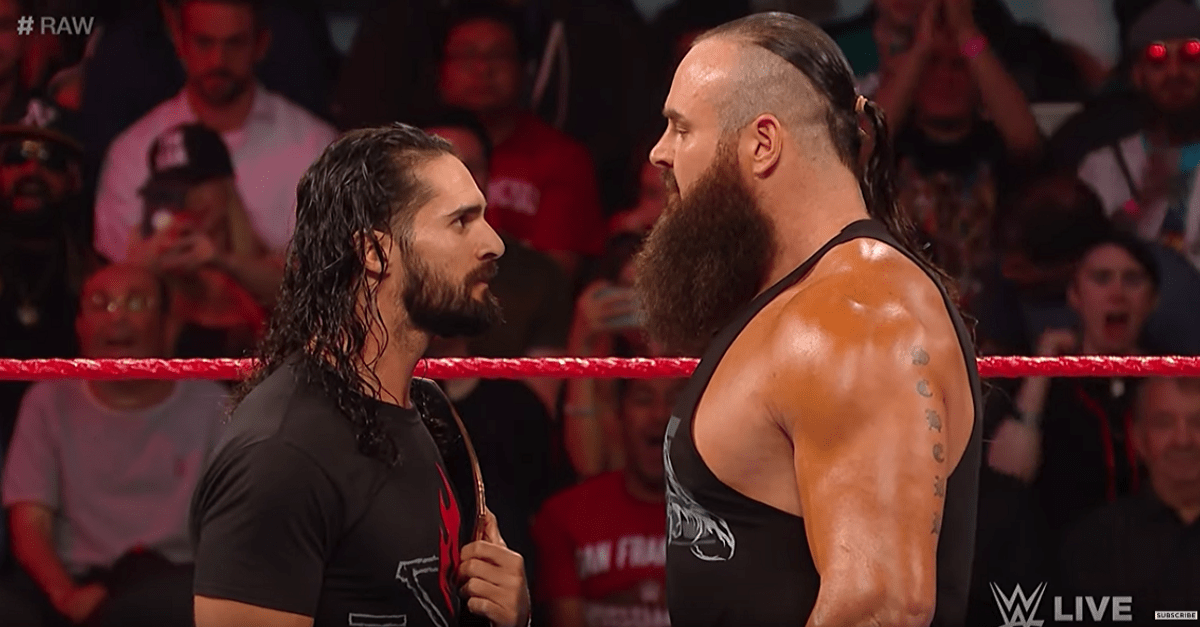 The WWE draft will be returning again for the FOX launch. To rid the notion of rosters splitting, Vince McMahon changed the name to the Superstar Shakeup, which is just another way of stating that some wrestlers would be exclusive to Monday Night Raw and some to SmackDown Live. Now, however, the WWE Draft name is back again, and WWE is making a much bigger effort to promote brand exclusivity.

Since the previous Superstar Shakeup a week following WrestleMania 35, there’s been much confusion to who was exclusive to which brand. With the exceptions of the Universal and WWE Champions, the Wildcard Rule made it a proverbial free-for-all regarding crossing brand lines. Originally, only three WWE superstars per week were supposed to show up unannounced from Raw or SmackDown, but that quickly changed to involve more names, and WWE stopped keeping track of who was going where. This even occurred on pay-per-views, as Raw superstars were competing for SmackDown-exclusive championships, and vice versa.

The last week of this free-for-all happens before the October 11 edition of SmackDown and October 14 edition of Raw, when the WWE draft is scheduled for both brands. The draft is meant to boost interest for the SmackDown Live FOX launch, as well as competing with All Elite Wrestling, which is scheduled to began weekly television on TNT head-to-head with NXT starting October 2.

What WWE Superstars Should Change Brands?

On a previous episode of SmackDown Live, Brock Lesnar made a surprise appearance to challenge Kofi Kingston for the WWE Championship on the debut episode of Friday Night SmackDown. Kofi accepted, making this the first time Lesnar competed on SmackDown in over 15 years.

There is a good chance Lesnar will win the WWE Championship on SmackDown in order to create a stronger level of star power for the brand launch. While Kofi is one of my favorite current WWE stars, the company has done a very lackluster job creating lasting impressions from “lighting in a bottle” moments, which is also why Becky Lynch’s momentum is fading after being one of the hottest names from SummerSlam 2018 to WrestleMania 35, as well as Stone Cold Steve Austin returning to Raw in order to bring greater interest to the Seth Rollins vs. Braun Strowman storyline.

With Lesnar to the SmackDown brand, it would surely bring a level plane as far as importance of the blue brand compared to Raw.

The current tag team picture on both Raw and SmackDown has been lackluster due to its lack of being featured enough on either brand. For instance, Raw created a makeshift team of Robert Roode and Dolph Ziggler, who became number one contender for the Raw Tag Team Championship by defeating Monday Night Raw’s current top teams ? Luke Gallows & Karl Anderson, The B-Team (Bo Dallas & Curtis Axel), Heavy Machinery, Curt Hawkins & Zack Ryder, Lucha House Party (Gran Metalik & Lince Dorado), The Viking Raiders, and The Revival (Scott Dawson & Dash Wilder). They would subsequently win the titles by defeating another makeshift team ? Braun Strowman and Seth Rollins ? at Clash of Champions.

The Usos have been absent from in-ring competition since the Raw Tag Team Championship match on the July 29, 2019 episode. In this match, The Revival were defending the titles against the Usos and The OC, with the OC winning the titles.

One of the best tag team feuds in the past decade has been between The Usos and The New Day. In addition to having some of the best matches in tag team history, their rivalry also gave a fresh light to the tag team division. With SmackDown being a primary focus with the upcoming FOX debut, rekindling this rivalry would be a very good way to refresh the division.

Since his heel turn at WrestleMania 34 against AJ Styles, Shinsuke Nakamura’s WWE run has been very lackluster. In fact, WWE booked him so poorly that he was paired for a brief time with Rusev, even participating at WrestleMania 35 in the SmackDown Tag Team Championship match. Recently, he was successful in his Intercontinental Championship match at Clash of Champions against The Miz, and he won the title by defeating Finn Balor at Extreme Rules 2019.

Although he has now been paired with Sami Zayn as a manager, he is much better as a babyface, and the staleness of his character has shown since his heel turn at WrestleMania in New Orleans. By moving over to Raw, Nakamura could once again turn babyface and even gain enough momentum from the WWE Universe as a babyface to chase the Universal Championship, especially if it is won by Bray Wyatt in his upcoming title match at Hell in a Cell.

However, I would not automatically have Nakamura chase the Universal Championship, especially since there needs to be more time to develop a storyline to get optimal results. In the meantime, rekindling his feud with AJ Styles would be a good thing to do. Since Styles is the current United States Champion, feuding for the title would add an extra incentive for fans to stay interested if they were to rekindle their feud.

In the world of professional wrestling, there are some people who do not need to wait a while to be pushed, primarily because they have an intangible “it” factor, or they have such a dominant physical presence that allows them to be used in a main event role. This certainly applies to Braun Strowman.

While WWE did not take long to push the “Monster Among Men,” he has fell victim to way too many close calls regarding winning the Universal Championship. This, as a result, has substantially hurt his character. Since 2017, Strowman has failed in numerous attempts at capturing the Universal Championship, being unsuccessful at SummerSlam 2017, No Mercy 2017, Royal Rumble 2018, Hell in a Cell 2018, Crown Jewel 2018, and Clash of Champions 2019. This tallies a total of six pay-per-views in the past two years that he has been unsuccessful against the likes of Brock Lesnar, Roman Reigns, and Seth Rollins.

A move to SmackDown could very well assist in removing that stigma of being unable to win the big match. Although he often is victorious at live events, as well as maintains a dominance presence on Raw, WWE has been unsuccessful in properly booking him in singles championship matches. In fact, the only title Strowman has one was the Raw Tag Team Championship, with one of these wins being with a minor (Nicholas), who was later revealed to be the 10-year-old son of referee John Cone.

When Daniel Bryan turned heel, his character became so villainous that he substantially helped the organic rise of Kofi Kingston and subsequent WWE Championship win at WrestleMania 35. However, as of recent, his character development has been quite odd. For several weeks, Daniel Bryan has been in a storyline with Roman Reigns, involved backstage equipment crashing down on Reigns as well as a car nearly hitting him. The person was later revealed to be Erick Rowan, which led to a match between Reigns and Rowan at Clash of Champions.

At Clash of Champions, Luke Harper interfered, realigning with Rowan and costing Reigns the match. On the following episode of SmackDown, Daniel Bryan was assaulted by Rowan and Harper, which seemingly led to a babyface turn. However, this could very well lead to Bryan being the mastermind of it all, leading the faction including Rowan and Harper.

While this could very well happen, Reigns competing against a three-man faction could hurt the path that WWE is carving for Reigns to be more respected by the WWE Universe. If he once again comes off as being heavily pushed, he will start to garner jeers, which would be counterproductive to finally reaching the current state of being mostly cheered. Even if Bryan stays heel, a move to Raw may be better, which would allow Reigns to feud with Rowan and Harper, and potentially team once again with The Undertaker to gain his retribution.

WWE Draft vs. All Elite Wrestling

The upcoming WWE draft should draw a major focus on the impending television rivalry with AEW. With former WWE stars such as Chris Jericho, Dean Ambrose (Jon Moxley), and Dustin Rhodes, as well as Jim Ross in the booth as an announcer, AEW is starting to legitimize as a competitive pro wrestling brand.

With the acquisition of Paul Heyman as Executive Director of the Raw brand and Eric Bischoff as the Executive Director of the SmackDown brand, the WWE draft should be a step in the right direction in reviving the interest of the product as a whole. One of WWE’s biggest areas of focus should be developing current and future stars on the WWE roster, instead of going to the legend’s well by bringing back WWF names such as Steve Austin, Hulk Hogan, and Ric Flair, as well as using names such as Triple H, Shane McMahon, and Shawn Michaels for storylines.

With billionaires Vince McMahon and Tony Khan reviving the TV wrestling war, the battle of wrestling promotions should be very interesting to watch. Since NXT is unofficially considered a main roster promotion since the move from the WWE Network to the USA Network. Hopefully, WWE as a whole uses the advent of AEW as a reason to attract and retain more viewers with riveting storylines that will develop after the upcoming WWE draft.