There are some stars of professional wrestling that see their fame grow so large that a ring can barely hold them. Triple H, Sting, Stone Cold Steve Austin, the Undertaker and Shawn Michaels, all have their names in the WWE Hall of Fame for their career accolades. But there are other names that fellow wrestlers will not soon forget, like that of Brett "The Hitman" Hart's brother, Owen, whose tragic death at Over the Edge 1999 still remains one of the most shocking moments in WCW, WWE and all of professional wrestling's history. This is the story of Owen Hart's death. 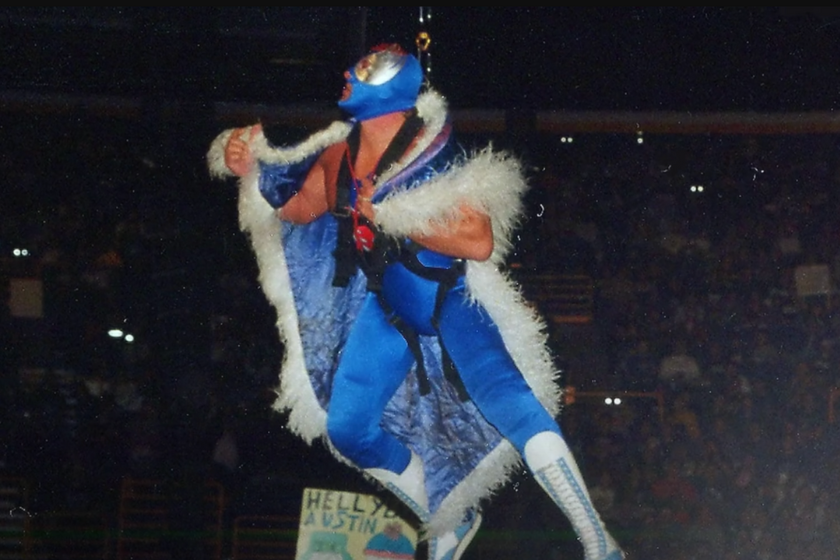 In the years before his death, wrestling fans knew Owen Hart for multiple reasons. The Hart Foundation, which is not a charitable foundation, is the name given to a number of tag team duos from 1985 onward. The most recent iteration, before Owen's tragic accident, began when he teamed up with Jeff Jarrett at Summerslam in 1998. The tag team pairing would go on to win the tag team belts, as well as successfully defend them at Wrestlemania XV. But Owen Hart would never wrestle in the sport's biggest event again.

On May 23, 1999, the World Wrestling Federation fans and personnel were shocked to the core after what happened at the WWF Over the Edge pay-per-view at the Kemper Arena in Kansas City, Missouri. Canadian-born Owen Hart, as the Blue Blazer, was scheduled to face The Godfather for the WWE Intercontinental Championship, and then something went horribly wrong.

At the PPV, Owen was supposed to make his entrance from the ceiling via a harness, and be lowered down but get tangled up in the cord before he entered the ring to fit the clumsy superhero character he was portraying.

Owen performed this stunt one time before in front of fans, as he descended down in a harness bumbling and flapping his arms, landing clumsily to the ground. He landed in the aisle while Steve Blackman was in the ring. Confused as to what was going on, Blackman went out of the ring and smacked around Owen as he was trying to ascend back up. For his match against The Godfather at Over the Edge, the WWF Creative team wanted Owen to perform a stunt that was a little more dangerous, having him release himself from the harness and fall flat on his face, chest-first.

Owen had reservations about performing this stunt. His brother Bret Hart stated in an interview with sports analyst Jim Rome that Owen did not want to perform the stunt, and he kept saying to his wife Martha that he was not going to do it.

I remember this. Today in 1999, Owen Hart (Blue Blazer) died when he fell 90 feet while being lowered into a WWF wrestling ring. pic.twitter.com/6Flll0a4Eq

"He left the house saying that he definitely would not do it, and sort of let Martha's worst fears sort of rest, because she was really uncomfortable with him doing it at all. But wrestling in one of those things where they can put so much pressure on you."

Hart added that Owen was supposed to win the IC title from The Godfather that night, "which would have been a big boom to his career." Bret does not know exactly what made Owen change his mind, but he stated that he does know that there is a lot of "subtle force" put on the wrestlers to do stuff that they are hesitant to do.

Owen Hart's death occurred right before his match against The Godfather. Stunt rigger Bobby Talbert suggested that Owen practiced the stunt before doing it live in front of the wrestling fans at the PPV since the setup was different that normal, but Owen declined. After more persuasion, Owen obliged, and successfully performed the test run. He was, though, advised not to touch the quick release cord before landing in the ring.

While descending down, the quick release accidentally triggered at 78 feet above the ground, and Owen Hart fell to his death. Those sitting at ringside saw the medical team try to save Owen, but to no avail.

Jim Ross, who was the play-by-play announcer during this match along with color commentator Jerry Lawler, stated, "this is not a wrestling angle. This is real life." He also stated, "we are not going to put this on television." Phil Boldridge, Entercon Radio Assistant, also recalled what he saw during the tragic fall.

"When I happened to look down from the falling object, I noticed that it was the actual wrestler that was supposed to be performing next. He ended up hitting his face onto the turnbuckle and did a flip, and ended up landing on his back." This blunt force trauma from landing on the top rope caused internal bleeding, which was revealed to be his cause of death. To this day, there has been no footage of Hart released after this tragic accident.

A day after the pay-per-view event, WWE stars honored Owen of the Raw event in St. Louis, Missouri. This Raw became an Owen Hart tribute show, with The Rock defeating Val Venis in the main event.

The Hart Family was very dissatisfied, and Martha Hart filed a wrongful death lawsuit against WWE, Vince McMahon, and Titan Sports. Calgary's The Globe and Mail stated that there was a settlement of $18 million, according to the Kansas City Star. This was $10 million for Martha, and the rest for Hart's family members -- $3 million each for the two children, and $1 for Owen's parents, Stu and Helen Hart.

The Blue Blazer gimmick was just one of many quirky moments during the Attitude Era. One of the biggest questions that still loom in pro wrestling is whether Owen Hart would have been a world champion if he was to still to be alive today.

Although there was not much of a storyline at Over the Edge, Owen's quest to create a legacy earned him the opportunity to claim the IC title.

Even 20 years later, the death of Owen Hart is still a topic of discussion among both fans and fellow WWE superstars.

This article was originally published on June 17, 2019, and has been updated since then, as we carry on Owen Hart's legacy.

MORE: Hell in a Cell. Mankind vs. The Undertaker: Relive WWF's Most Insane Match