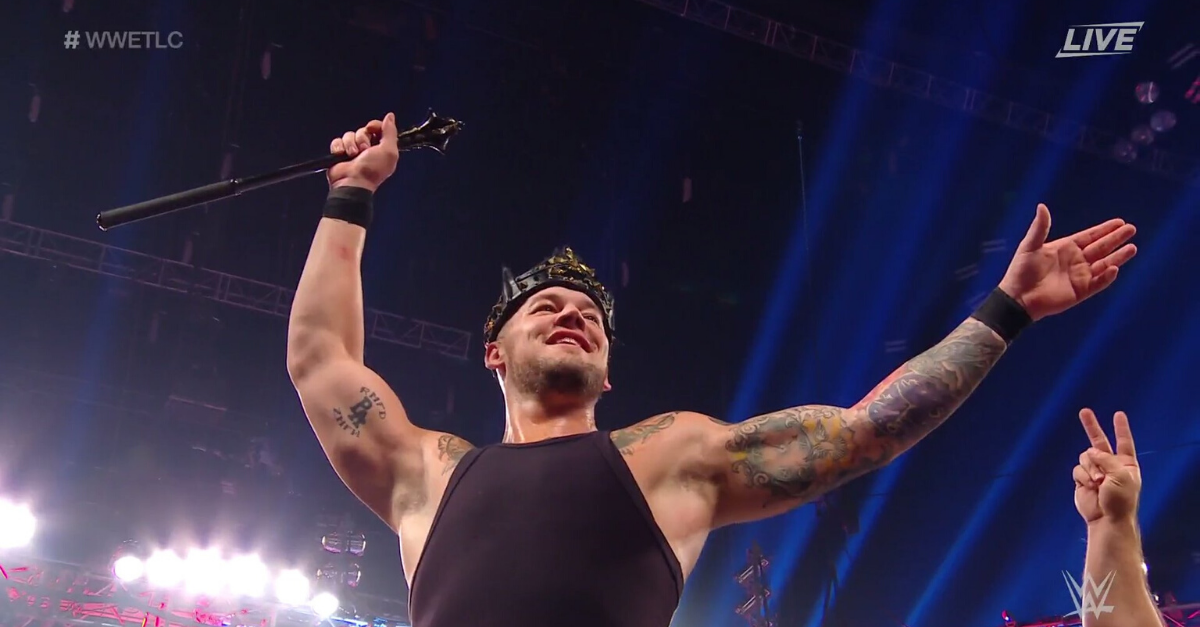 WWE TLC 2019 is the final stop of the year for WWE, and the last pay-per-view before the road to WrestleMania kicks off. The show, held at the Target Center in Minneapolis, Minnesota, had not been heavily marketed as far as marquee matches. In fact, neither the WWE Championship nor the Universal Championship were scheduled to be defended, although Universal Champion Bray Wyatt would be competing.

The card primarily focused on the feud between Roman Reigns and King Corbin, as well as the SmackDown feud between Bray Wyatt and The Miz, the ongoing storyline with Rusev and Bobby Lashley, and the WWE Women’s Championship Tables, Ladders & Chairs match. Here were my live reactions of every match as the night unfolded.

Solid match, but nothing special. Surprised that Carrillo won again, but it seems like they are moving forward with the breakup between Andrade and Zelina Vega. Not sure why it makes sense to breakup Andrade and Vega, unless the next angle may involve Vega and her real-life husband, Aleister Black.

The New Day vs. The Revival ? Ladder Match

What a match! Big E looked like he could have suffered all kinds of injuries, but I am glad that he is okay and left the match nothing more than banged up. Really nice acrobatic spots from Kofi Kingston as always. Kofi hit Scott Dawson with the belts while both were reaching for them. Dawson fell and went through a ladder, followed by Kofi grabbing the titles for the win.

Although having the SmackDown Tag Team Championship is more of a consolation prize for Kofi after getting squashed on the debut of Friday Night SmackDown on FOX by Brock Lesnar, the commentators putting Kofi’s awesome 2019 over, along with him triumphantly sitting on the top of the ladder, is a good representation of his best year ever as a WWE superstar. Ideally, it would be cool to see The New Day have a long title reign, even having a featured title match at the upcoming WrestleMania 36 PPV.

Interesting way to start the match, with the “criss-cross applesauce” from both of them. It furthers the hype of the match, although it does not seem like the audience bought that Murphy had any chance of beating Black. Black was busted open by Murphy, and his nose may be broken. Series of super-kicks to Black while he was stuck on the ropes certainly does not help his possibly broken nose, and the fans reacted to it the same way.

I am surprised Murphy is getting this much offense on Black, especially since it seemed clear that Black is the person WWE wants to push, while using Murphy as fodder to boost him. Black nails Murphy with a Black Mass out of nowhere, but the way that this match panned out was weird.

This open challenge concept from the Viking Raiders is a decent way to bring some kind of spotlight to the Raw tag team division. However, it is the same small batch of teams, so it does not make it very interesting. Luke Gallows and Karl Anderson has accepted the challenge, with the angle of Erik and Ivar “avenging their only loss.” Luke Gallows breaks the finisher, Viking Experience, after it seemed like the champs were going to win. Odd that the finish was a double count out.

Perhaps this feud continues to the Royal Rumble, but again, Anderson & Gallows have been on so many start-stop pushes that it is hard to take them seriously. The Viking Raiders drive Anderson through the KFC table with a double powerbomb and leave the match looking dominant.

As I have said for years, a good heel make a better babyface. Baron Corbin is one of the biggest heels in the company right now, and makes it fool-proof for the fans to get behind Roman Reigns. Since the latter half of 2019, Reigns has been a solid babyface to WWE crowds across the globe, and his feud with hated villains has certainly helped gain fan adulation. Well-deserved collection of “Roman!” chants by the Minneapolis crowd, too.

Crowd is really involved in this TLC match, seemingly more than they have been with any other aside from the tag team title match. Dolph Ziggler nails Reigns with a superkick, which got a ton of heat from the crowd. (Again, that’s exactly what you want from a heel!) The Revival comes out, which stacks the deck even more in Corbin’s favor. Corbin wins with help from Ziggler and The Revival, which protects Reigns. Interesting that there was a small chant for The Usos during the gang attack, which would have been interesting.

The Miz vs. Bray Wyatt

It is still very weird that WWE is keeping The Fiend off the show, and booking him as simply Bray Wyatt, because The Fiend is what makes Wyatt an anomaly. Wyatt is getting babyface pops, which again is very, very odd, especially since the Fiend-less Wyatt is portraying himself as a babyface. This hurts The Miz, who is supposed to be the babyface, especially since Wyatt was playing mind games with his family.

The Miz gets on onslaught of offense, and counters a Sister Abigail with a Skull Crushing Finale. Miz with a Pentagon, Jr.-esque arm breaker, which looked cool. There have been several dead spots from the crowd, mainly because this is a very odd booking. Wyatt ends the match with another Sister Abigail after executing one outside. Fans chanting “let him in” makes it even more weird, and The Fiend’s face on the jumbotron ? this causes Wyatt to pull out a giant mallet ? makes this an incredibly bizarre match, in a bad way.

Daniel Bryan comes out looking like his Bryan Danielson ROH days! So, as odd as this Bray Wyatt thing was, Bryan coming out and attacking him made sense. So, WWE did not want The Fiend to suffer this kind of punishment, so it makes sense. Good way for Daniel Bryan to refresh his character by bringing back his old look.

The fans reacted the loudest when Daniel Bryan returned, so this match is really dead. Instead of maintaining that momentum, this match squelched it for the most part. The fans are not very much into this match ? I think the audience and I both agree that this feud needs to be over with.

Match ends with Lana jumping on Rusev and raking his eyes, followed by a botched spear to a table that did not break. Very fitting for this match. Lashley improvises and gives him a belly to belly through a table.

What in the world did I just see? The Street Profits cutting a promo backstage, then it cuts to a big brawl involving Reigns, Corbin, The New Day, Shorty G, The Revival, Dolph Ziggler, and Buddy Murphy?

Then, the Street Profits decide to jump in without reason and attack Murphy? What kind of dual-branded nonsense is going on?!

First and foremost, #WWETLC was all about DESTRUCTION for #TheMan @BeckyLynchWWE and #TheQueen @MsCharlotteWWE! pic.twitter.com/Q0mu6hX0k9

Hard-hitting match for the WWE Women’s Tag Team Championships, and it’s been interesting so far. Somehow Kairi Sane thought that randomly tossing the chairs in the ring was the safest route. Not only did she hit herself after one bounced back on her, but it could have hit someone else badly as well. Asuka and Sane tie Lynch up to a ladder, and were about to climb it, until Charlotte prevents them from winning the match.

Lynch ends up wiggling her way out of the ropes, and both gain an advantage over the champions. Good double leg drop spot from Becky to Asuka from the ropes through a table outside the ring, but the botched spot from Sane, of course, was not well-received. Although there were some good moments during the match, much of it is very sloppy.

THIS IS STILL GOING ON?!@WWERomanReigns just SPEARED King @BaronCorbinWWE into what seems like the entire ROSTER to close out #WWETLC! pic.twitter.com/ai9Y5qU3W5

The show ends with Reigns and Corbin still fighting each other, along with several other member of the Raw and SmackDown roster. This is all for the purpose of Reign spearing Corbin off a platform onto several people. Bad ending to the show overall.

MORE: Who Has a Better WWE Career: John Cena or The Undertaker?