Kids of NBA players are proving they're more than a last name. Bronny James is lighting it up at Sierra Canyon. D.J. Wagner is the top high school basketball player in the country and is set to play for Kentucky next year. Shaquille O'Neal's kids are dunking all over the placel.

As for Detroit Pistons and Chicago Bulls great Dennis Rodman, we got an inside look on his life in Michael Jordan's ESPN documentary, "The Last Dance." We learned about his relationship with MJ and Scottie Pippen, his dating escapades with Carmen Electra and Madonna and his infamous in-season trip to Las Vegas.

We didn't hear much about his kids, but his son Dennis Rodman Jr., who goes by DJ, is carving his own path in Pullman, Washington on the Washington State Cougars basketball team. 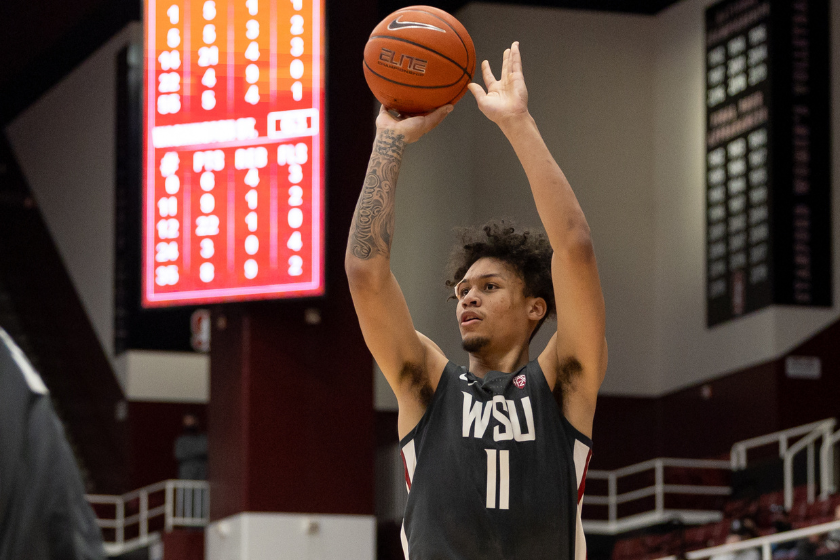 DJ is the son of Dennis Rodman and Michelle Moyer. His younger sister Trinity Rodman is a forward for the Washington Spirit of the National Women's Soccer League (NWSL).

Rodman began his high school hoops career at Corona Del Mar High School in Newport Beach California. As a sophomore, he averaged 20.2 points and 6.5 rebounds while leading the team to a 22-8 record. He transferred to JSerra Catholic High School in San Juan Capistrano for his upperclassmen years to play in the Trinity League -- one of the most competitive leagues in Southern California. As a junior, he averaged 16.1 points and 6.1 rebounds. He really shined as a senior, averaging 24.2 points, 8.9 rebounds, and 1.2 assists en route to first-team All-Trinity League honors.

"DJ is a shotmaker who has a really good feel for the game. He was a very productive player displaying the ability to score and rebound at a high clip in one of the best high school leagues in California, the Trinity League."

The Cougars haven't made the NCAA Tournament since 2008, but that could change in the coming years.

He's Grown Into a More Vital Role at WSU

Dennis Rodman's son DJ played 11.9 minutes per game as a freshman, and the son of the Hall of Fame basketball player more than doubled his playing time as a sophomore, averaging 6.1 points per game on 23.4 minutes of action. During his junior campaign, he averaged 19.4 minutes and 4.2 points per game.

Now that he's a senior, D.J. has assumed a starting role and looks to have the best season of his college career.. He's averaged 31.5 minutes and a career-high 10 points per game in the Cougars' first two matchups against Texas State and Boise State. However, he was out with an illness in the third contest of the year against Prairie View.

The son of the two-time NBA All-Star will play his biggest role at Washington State this season. And he may look like his dad, but he's piloting a course of his own.