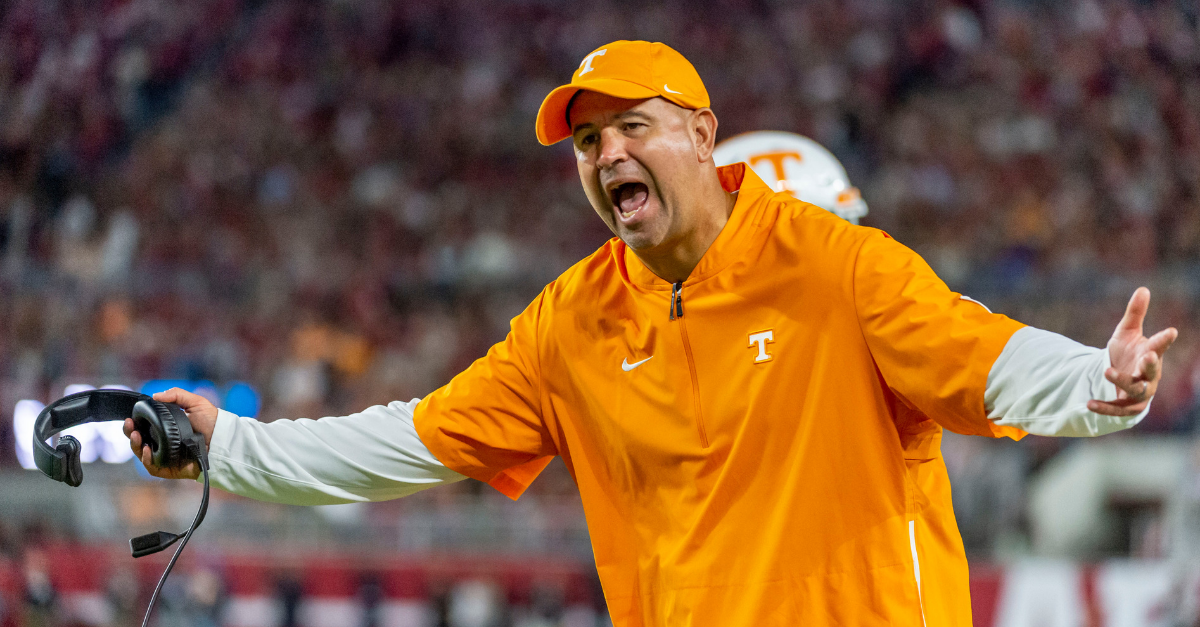 College football lives by the saying, “What have you done for me lately?” In this multi-billion environment, not every program is going to compete for a College Football Playoff berth, but every fan base demands success. That standard changes if you’re coaching the Alabama Crimson Tide or the New Mexico State Aggies, but still, the leash is short when winning is everything.

Chris Ash, now working for the University of Texas, was 2019’s first coaching casualty when Rutgers fired him five weeks into the season. Granted, trying to build a competitive program for the Scarlet Knights is like building a five-star hotel out of wet toilet paper, but eight wins in three-plus seasons will get you fired no matter where you are.

Lovie Smith’s seat was warming after four-straight losses in 2019, but the Illinois Fighting Illini shocked the college football world and beat then-No. 6 Wisconsin in a program-defining win. Smith saved his job for now, but he’s still facing an uphill battle.

For as much grief as he’s taken the last few years, Auburn’s Gus Malzahn saved his job and appears to be safe on The Plains.

However, as season’s sour across the country, whispers of coaching changes are beginning. Here are 10 college football coaches whose seats are sizzling hot and might looking for new jobs after the 2019 season.

Joe Moorhead inherited a Top 15 team at Mississippi State. Following the loss to LSU, he is:

I don't want to say the Joe Moorhead era has been a complete disaster… but well, it has been

The Bulldogs head coach went 8-5 in his first season last year, and high expectations followed heading into 2019. However, quarterback issues and a defense that’s fallen off tremendously ? the No. 2 scoring defense in 2018 is ranked 76th this year ? cries that Moorhead may be in over his head in the SEC.

If he can’t bring an impressive batch of recruits in and restore confidence going into the offseason, the offensive guru could be on the move already.

Continuing proof that U Conn football coach Randy Edsall's agent is the best on this planet, perhaps universe: https://t.co/0pRMGsrfRM pic.twitter.com/kymVjDqnui

The Connecticut Huskies are one of the least desirable jobs in all of college football. So, who do you bring in hoping to bring the program unprecedented success? The only man who ever found it in the first place.

Edsall coached UConn from 2000 to 2010, winning eight games six different times ? the only such seasons in program history ? but they’ve been putrid ever since he left for the Maryland Terrapins and a brief stint in the NFL. UConn is a black hole where nothing escapes, and even Edsall can’t seem to turn this team around in year three. With only five wins under his belt, including his sixth-straight loss midway through 2019, it might be time for UConn to forget the past and find its future.

Vandy coach Derek Mason with the postgame interview of the day 💀

It’s year six with Derek Mason leading the Commodores, and it appears like this will be year six that Vandy doesn’t post a winning season. Losses to Georgia and LSU are one thing, but losing to UNLV at home is a completely different story. Luckily for Mason, his team knocked off then-No. 22 Missouri in October, which could keep him afloat a little while longer.

247Sports ranks Vanderbilt’s 2020 recruiting class as the SEC’s worst for the second-year in a row. It’s tough when you’re competing with the Tennessee Volunteers and even Memphis Tigers for recruits in your own state, but Vandy’s remained flat for a while. Mason signed a contract extension for the second time back in February, but are losing records and beating a bad Tennessee program really enough for Vandy fans?

Mark Dantonio, MSU fans want to love you. They’re worried, though, that you might leave the program as you found it, with all the old warts and insecurities in plain sight.

You can fix this relationship. Your words matter.

This one is tricky considering the Spartans finished as a top-6 team from 2013-15. However, things haven’t improved since then, and if there’s one thing the Dantonio era should’ve taught Big Ten fans, it’s that Michigan State always, well, just kind of hangs around.

With embarrassing losses to Ohio State and Wisconsin, the Spartans need to finish 2019 strong with games against Penn State and Michigan still on the docket. It’s not that Dantonio is coaching himself out of the job, but sometimes, moving on from a coach and his staff can spark a renaissance. Plus, the 63-year-old head football coach is owed $4.3 million if he’s with MSU on Jan. 15, 2020.

Money or legacy? Dantonio’s rise with Michigan State football is well-documented, but how long can stories like this one keep him relevant?

Just a reminder Chad Morris was 14-22 at SMU before Arkansas hired him.

Three years is typically the breaking point for college coaches. With the Razorbacks, a program fighting for relevancy in the SEC, 2019 is only Morris’ second season at the helm. You’d think he’d have a cushion to make things better, but it’s only getting worse.

For as downtrodden as Arkansas is, they’ve never been this bad. After winning two games last season, Morris’ team has only two wins halfway through 2019 and fell victim to an embarrassing home loss against San Jose State. With games against the likes of Alabama, LSU and Missouri still to play, Arkansas could finish back-to-back college football seasons with three or fewer wins for the first time since 1952-53. Yikes.

Michigan fans would fire Jim Harbaugh on the tarmac Lane Kiffin style if they could.

It’s hard to make an argument against Harbaugh. He managed 38 wins in his first four seasons, is as talented a FBS-caliber coach as you’ll find, and most importantly, he’s a Wolverine alum. However, three-straight bowl game losses, plus losing ground to Ohio State and Penn State in his own division, means it’s time for the King of Khakis to make his final stand.

A massive home game against then-No. 8 Notre Dame is huge for his program. The last game of 2019 will be “The Game” as Michigan hosts Ohio State. Harbaugh’s squad needs to prove that they’re not a fluke. Winning big games is what Michigan fans expect, so if he can’t, how much longer will the school stand beside their “Michigan Man?”

The days of the high-flying Oregon Ducks aren’t forgotten, but this UCLA team isn’t what fans expected. Kelly’s offense averages just 27 points per game, while his scoring defense is ranked 115th in the country. At a time where rival USC is struggling, this should’ve been Kelly’s chance to takeover Los Angeles, California.

I can’t help but think that because Kelly set the standard so high in Eugene that he’s expected to make UCLA a Pac-12 contender overnight. The 67-63 come-from-behind thriller to beat then-No. 19 Washington State earlier this season flashed potential, but UCLA still has to play Arizona State, Utah and USC in 2019. What happens if Kelly doesn’t improve on his 3-9 mark in year one?

I know you’re mad Jeremy Pruitt, but don’t do that. pic.twitter.com/knG3297Mar

Again, the three-year statute is in play for the Vols and Jeremy Pruitt. He’s only in year two, but boy, things are going from bad to worse to down-right ugly. After yanking on QB Jarrett Guarantano’s facemask in a 35-13 beatdown by Alabama, Tennessee is through the difficult part of its 2019 schedule and needs to rebuild its image fast.

With a 2-5 record, the Vols must hold their own against divisional opponents South Carolina, Kentucky, Missouri and Vanderbilt. If they don’t, Pruitt better start the 2020 season hot. Otherwise, he won’t see the final game of next season.

That this was the homecoming crowd before kickoff at the Coliseum tells you all you need to know about Clay Helton’s job. https://t.co/w9CVu6hAL6

With Sam Darnold leading his offense, Clay Helton won 21 games in two seasons, as well as a Rose Bowl. Since then, USC’s fallen into the realm of mediocre. Ranked wins at home against Stanford and Utah look good, but losses against BYU and Washington while the Trojans were ranked look even worse.

Helton and company are eyeing a potential bowl berth with a 4-3 record through seven games. However, the 64th-ranked recruiting class of 2020 means things aren’t exactly going to get better.

Something to remember: USC holds a verbal commitment from five-star Narbonne High School quarterback Jake Garcia for the 2021 season. The nation’s No. 3 QB needs a great coach. Will Helton have the school’s confidence to be that guy?

The ACC is the weakest Power Five conference in college football, and a blue-blood program like FSU should be taking advantage. Instead, the Seminoles and Willie Taggart are watching Clemson dominate while losing games to Wake Forest.

Rumors are swirling that boosters want to buyout Willie Taggart’s contract. A viral lemonade stand earlier in the year was simply a joke-gone-wrong, but now, it doesn’t exactly sound like a bad idea. Taggart’s recruited Florida really well, and the ‘Noles are bringing the 13th-ranked recruiting class to Tallahassee in 2020.

Problem is, is Willie Taggart really the man to lead the school back to national prominence?