The Gators Are Florida’s Best College Football Team. Here’s Why. 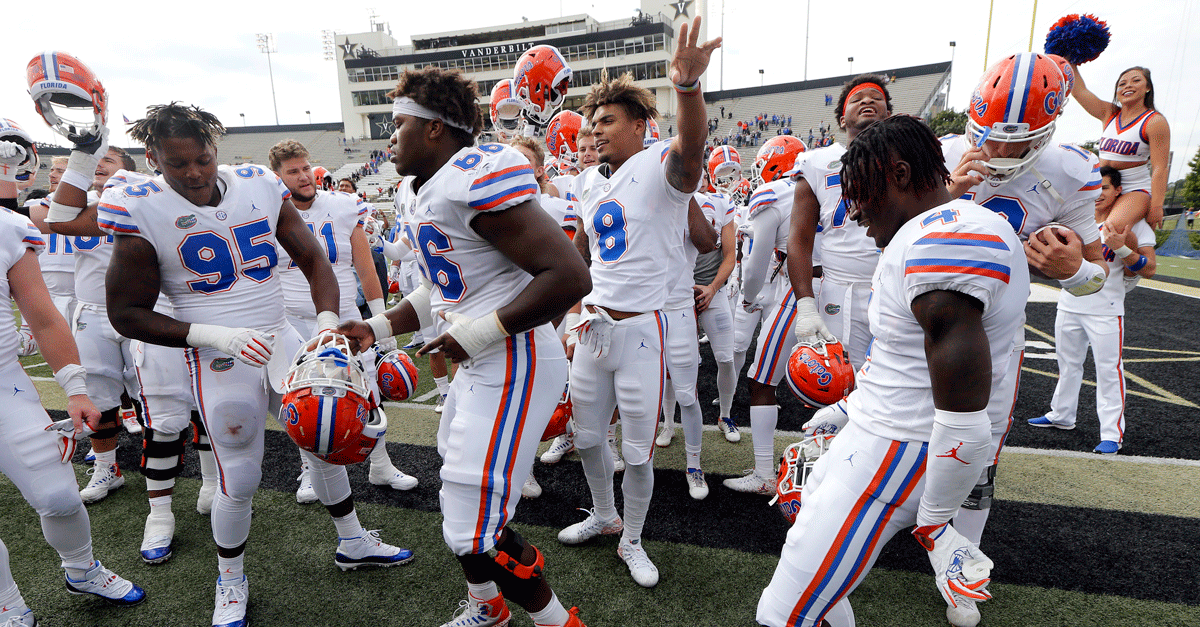 Eight weeks into the 2018 season, the college football picture for the state of Florida is starting to become clear. UCF is good but hasn’t played anyone significant, Miami has a stellar defense but needs a statement win, USF is a poor man’s UCF and Florida State…probably misses Jimbo Fisher.

That leaves Florida (6-1), which is the best of the bunch following its 27-19 win over then-No. 5 LSU and a 37-27 comeback win against Vanderbilt. The Gators have a different edge to them under first year head coach Dan Mullen, as he’s seemingly fired the team up more than former coach Jim McElwain ever did.

Anyway, there are a few reasons UF is back on top in the Sunshine State. Here they are.

1. Florida is 2-0 versus ranked opponents

No other team mentioned above can say that.

The Gators own wins over LSU and Mississippi State, respectively ranked fifth and 23rd at the time, while also handily defeating rival Tennessee 47-21. They’re taking care of the teams that matter which is largely why they sit at No. 11 in the Associate Press Top 25 Poll.

Losing to Kentucky in week two remains their only blemish, and at the time it seemed all hope this season was lost because it snapped a 31-game winning streak against the Wildcats. But 14th-ranked Kentucky has proved itself this year, adding wins against Mississippi State and South Carolina.

Miami dropped its season opener against a ranked LSU and also lost to Virginia, and No. 10 UCF hasn’t played a ranked opponent, so Florida has the clear edge here.

2. Florida’s defense is one of the best at forcing turnovers.

GUESS WHO! EDGE #99 Jachai Polite with that burst off the edge pic.twitter.com/hFsGZGRGVb

Surprise, surprise. A UF defense is good at something.

While Florida may not be as good limiting opponents in yards per game as, for example, Miami, which ranks first in the nation at 237 yards per game (UF is tied for 21st at 323.3), the Gators are tied for first with Kansas in turnovers gained (18) and feature the 10th best turnover margin among FBS schools.

A big reason for those numbers can be traced back to one man: Jachai Polite. The junior defensive end has already forced four fumbles through seven games, which is tied for first among all FBS players. His seven sacks ranks second in the SEC. Here’s a clip to prove his freakish skills.

3. Dan Mullen is creative and not afraid to show it.

It’s a screen to Kadarius Toney… no, no it’s a double pass… and IT IS A TOUCHDOWN TO MORAL STEPHENS!

And the #Gators LEAD Mississippi State in Starkville! pic.twitter.com/pnIwRVgcCS

There was the double pass that led to a Kadarius Toney passing touchdown to Moral Stephens against Mississippi State, a trick play Mullen has dubbed “kodak,” in homage to rapper and Gator fan Kodak Black.

There was the 15-yard pass from tight end and former college baseball player Lucas Krull to quarterback Feleipe Franks that set up a touchdown against LSU. That one was named the “throwback.”

There was the Franks jump pass touchdown to Tyrie Cleveland against Colorado State that Tim Tebow made famous while Mullen was here as offensive coordinator.

And you can be sure there will be more trickery this season.

4. Franks has been all they’ve needed.

Franks may not have the numbers that UCF’s Mckenzie Milton and USF’s Blake Barnett have, but the redshirt sophomore has done enough to get the job done. What’s encouraging about Franks is that he doesn’t really turn the ball over or get sacked all that much.

One stat that may surprise you: his 15 passing touchdowns are tied for second in the SEC to only Alabama’s Heisman frontrunner Tua Tagovailoa. And that’s in a conference that features Jake Fromm, Jarrett Stidham and Drew Lock. Franks’ QBR this season is better than the two latter names.