The Heisman Trophy is the most coveted award in all of college sports. Heck, maybe even all of sports. As players throughout college football history will tell you, it's one of the hardest achievements for an NCAA athlete to reach.

For this year's candidates, USC Trojans QB Caleb Williams, TCU's signal-caller Max Duggan, Ohio State's field general C.J. Stroud and reigning national champion Stetson Bennett of Georgia have all had their Heisman moments, but only one can win the coveted college football honor. With three of the four finalists set to duke it out in the college football playoff, it's possible we may even see Heisman poses during the CFP games.

The most recent players to take home the iconic piece of memorabilia are former LSU Tigers star Joe Burrow, Alabama wide receiver DeVonta Smith, who both won national titles, and Bryce Young, head coach Nick Saban's current quarterback at Alabama. Johnny Manziel lit up defenses at Texas A&M and blew away finalists to became the first freshman to hoist it. Former USC football legend Reggie Bush was the first and only player forced to give his up.

It's even been sold numerous times. O.J. Simpson fetched $255,000 for his 1968 trophy. Former Notre Dame Fighting Irish wide receiver and NFL Hall of Fame inductee Tim Brown sold his 1987 Heisman Trophy for a whopping $435,763 at an auction. That's how valuable the 45-pound statue made of cast bronze is.

New York City's Downtown Athletic Club awarded the first ever version of the trophy, then known as the DAC Trophy, to Chicago's Jay Berwanger in 1935. A lot has changed since then. It wasn't until the 1990s, however, that one of the more recognizable poses became famous: the Heisman pose.

Who is the Heisman Trophy Named After? 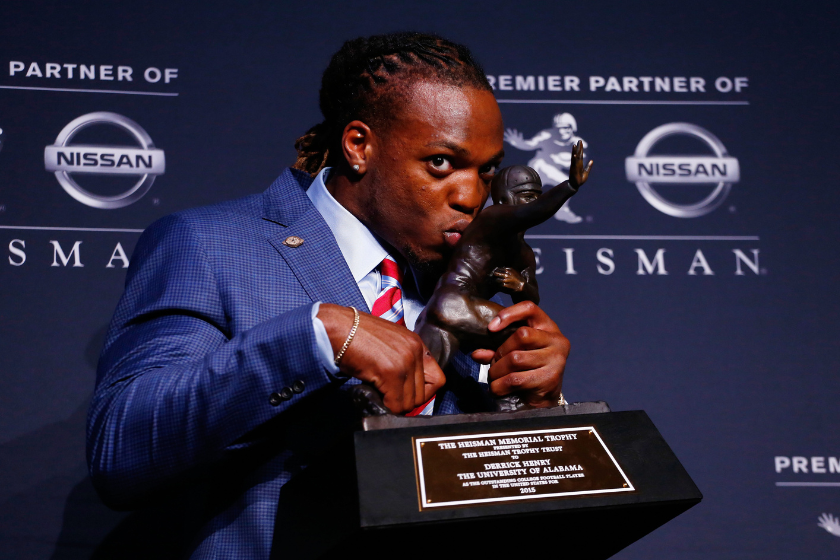 The Heisman Trophy, given annually to the NCAA's most outstanding player, is named after John Heisman. Heisman was a coach for more than 30 years at schools such as Auburn, Clemson and Georgia Tech and was instrumental in implementing a legal forward pass into the game in the late 1800s. He also invented the hidden ball trick play we all know and love.

Heisman famously coached the Georgia Tech Yellow Jackets to a 222-0 win over Cumberland College in 1916. He then won a national championship the following season.

The Heisman Trophy was named in his honor in 1936 shortly after he died. He was inducted into the College Football Hall of Fame as a coach in 1954.

What is the Heisman Pose? 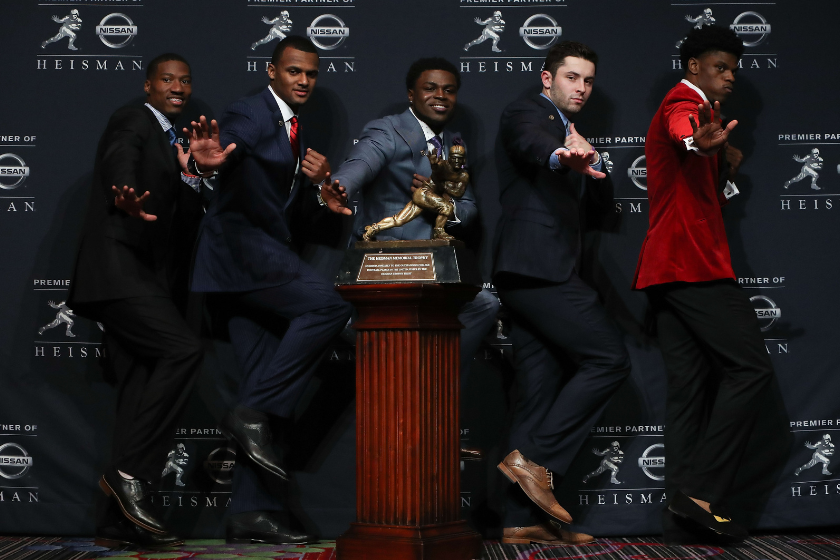 Any college football fans from Boston College in the ACC to Oklahoma in the Big 12 to either Los Angeles member in the Pac 12 knows the iconic Heisman pose.

From the college football field to the high school ranks to the neighborhood lot, young football players likely learn about the Heisman pose at a very young age.

History of the Heisman Trophy Pose 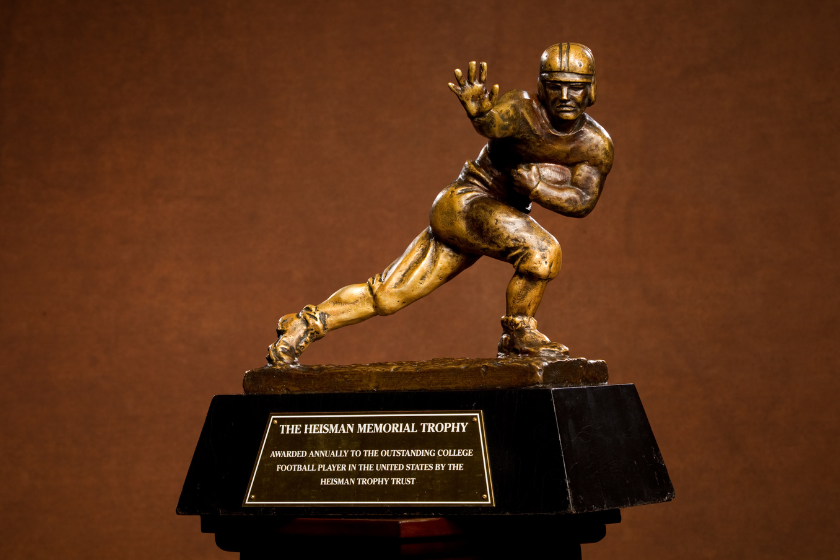 The story of how the Heisman pose came to be is one that dates back to the 1930s.

Ed Smith, who was a running back at New York University at the time, was asked to pose for the statue in 1935 by a friend, sculptor Frank Eliscu. Smith had no idea the pose he made would eventually became world-famous, according to The Morgantown News.

Smith didn't even know he became the NCAA's most recognizable trophy until some 50 years later, when a filmmaker called him up to interview him in 1982. Three years later in 1985, he received his own copy of the Heisman Trophy. By then, Smith was in his 70s.

Who Made the Heisman Pose Famous?

.@DesmondHoward was the first to strike that iconic Heisman pose. pic.twitter.com/Y1p8B3nkzU

In 1991, the Heisman Trophy winner and Michigan star scored a touchdown on a punt return against the Ohio State Buckeyes in a Big Ten classic matchup inside Michigan Stadium. When he reached the end zone he flashed the "Heisman pose." It became a cultural phenomenon after that.

Oddly enough, Howard was sued by the original photographer for using the picture of his Heisman pose. Brian Masck, who worked for the Muskegon Chronicle and snapped the famous photo, came to a settlement with Howard in 2014 that would allow both men to make money off the shot.

Masck stated in the lawsuit that he sold the photo to Sports Illustrated for a one-time use but had circulated and been used without his permission.

Since Howard's pose that day, many college football players and winners of the trophy have struck the iconic pose. Auburn's Cam Newton and Florida State's Jameis Winston have done so. Lamar Jackson broke it out when he accepted his award in 2016. The tradition isn't limited to Heisman winners. Even Barack Obama has extended his arm in front of him and hiked his knee up.

The Heisman pose has been around forever, but it wasn't Desmond Howard who first stiff-armed the college football. It was Ed Smith.

MORE: Dwayne 'The Rock' Johnson Sacked a Heisman Winner During His Playing Days