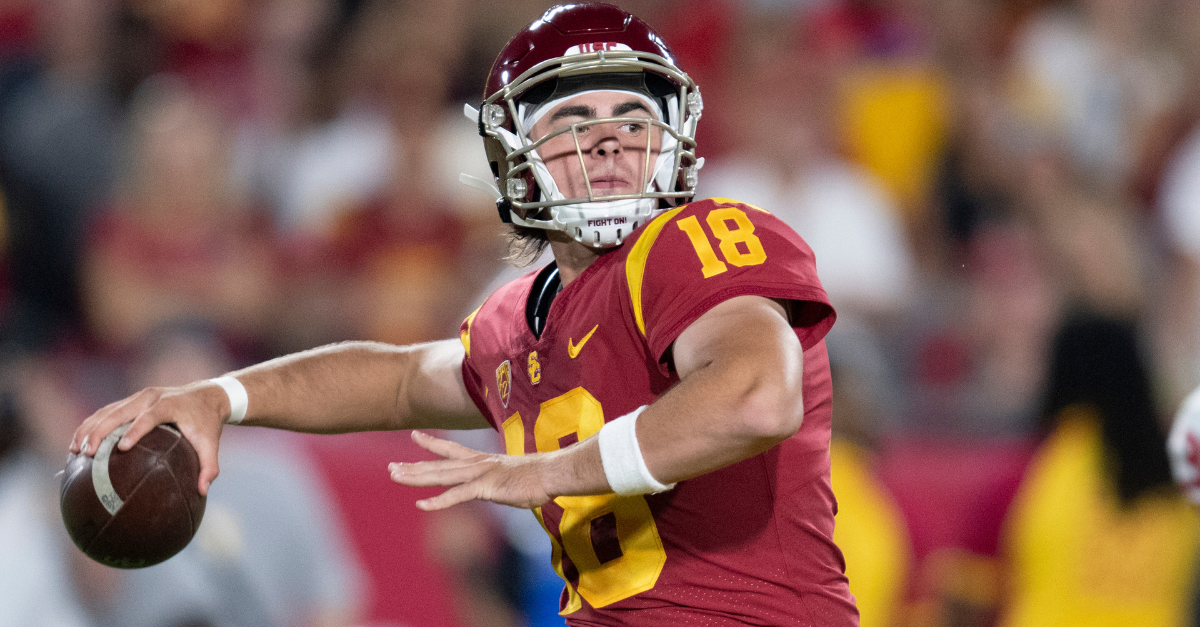 The Georgia Bulldogs should have little trouble replacing Jake Fromm, who as a freshman led them to a College Football Playoff National Championship game, finished his career with the second-most passing touchdowns (78) in program history and landed in the NFL.

Kirby Smart has been hot on the recruiting trail, luring in 2021 five-star Brock Vandagriff (who already looks like the next Matthew Stafford). He also convinced former Wake Forest breakout quarterback Jamie Newman — a top five candidate to win the Heisman Trophy — to transfer to the SEC school in January 2020.

Smart’s done it again by reeling in another uber-talented passer.

THANK YOU USC ✌🏻
Excited for the future #GoDawgs🐶 pic.twitter.com/ewfhBG3ved

“THANK YOU USC. Excited for the future #GoDawgs,” he wrote on Twitter.

Daniels was formerly the USC Trojans starting quarterback in 2018, when he threw for 2,672 passing yards, 14 touchdowns and 10 interceptions as a true freshman. Those uninspiring numbers, coupled with a season-ending knee injury in the team’s 2019 season opener against Fresno State, led to Daniels losing the job to Kedon Slovis last season.

Daniels then in April 2020 announced he was entering the transfer portal. More than a month later, he officially announced he would don the red and black.

Nothing is official from the NCAA yet, but Daniels may be forced to sit out a year. He could, however, apply for an immediate eligibility waiver because of his knee injury. He could also receive a medical redshirt for the 2019 season.

Newman is a graduate transfer expected to handle quarterbacking duties in 2020. After that, Daniels could compete with Vandagriff for the starting role in 2021. Either way, a crazy amount of arm talent will be in the quarterback room in Athens. The Bulldogs also have Carson Beck, Stetson Bennett, and D’Wan Mathis on the roster.

UGA has found itself on the wrong side of the transfer portal in years past. Justin Fields headed for Ohio State and nearly won the Heisman Trophy. Jacob Eason took off for Washington and blossomed into a fourth-round pick. Newman and Daniels could represent a changing of the tide.

Despite becoming a true freshman staring quarterback in the Pac-12 in 2018, Daniels impressed at times for USC.

The kid from Mater Dei High School (Santa Ana, California) led the Trojans to a top-20 win over Colorado and beat Arizona and Oregon State. USC finished 5-7 under Clay Helton but dropped a handful of close games.

Daniels numbers in high school were as eye-popping as they come. In three seasons, he totaled more than 12,000 passing yards and 152 touchdowns, according to MaxPreps. No wonder he was one of the most sought after signal-callers of 2018.