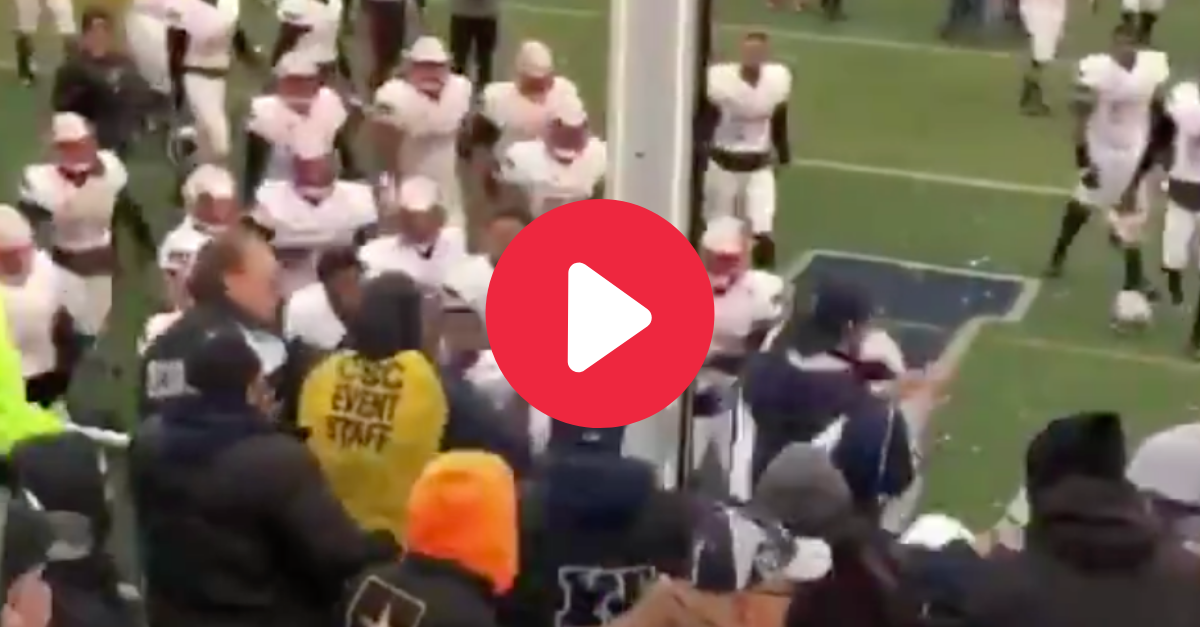 No matter where you are, or the team?s records, all college football rivalries can get heated. The biggest games obviously mean more on the national stage, but every last one of them involves a great deal of pride for the schools, players, and fans. Just ask everyone at 2019’s Nevada Wolf Pack and UNLV Rebels game.

On the field, this Mountain West Conference showdown was an instant classic that ended with UNLV quarterback Kenyon Oblad connecting with wide receiver Steve Jenkins for a game-winning, 19-yard touchdown pass in overtime. After the emotional football game, however, was a completely different story.

A ridiculous brawl took place that involved players from both teams and even fans at Mackay Stadium in Reno.

Here is the broadcast angle of that crazy ending and fight in the Nevada/UNLV game pic.twitter.com/jXVke9ZTkv

Emotions run high during rivalry games. That is nothing new. What made this different is the fight that occurred in the back of the end zone when it was all over.

After the walk-off touchdown, UNLV players ran onto the field to celebrate. The Las Vegas program was heading in a new direction with the school and head coach Tony Sanchez parting ways before the game, but it didn?t stop the Rebels from enjoying the moment.

Then, all hell broke loose. Video evidence shows Nevada?s Austin Arnold throwing a punch at Oblad, and everything escalated from there.

Best video I’ve seen of the fight. Appears Nevada’s Austin Arnold threw the first punch (a punch from behind on UNLV’s quarterback). Kenyon Obland might have said something to spark it, but that punch led to the brawl.
pic.twitter.com/U88JMYIabH

Coaches, security, and police officers all tried to break up the fight as fans yelled and threw trash onto the field. It also prompted both athletic directors to release a joint statement following the game.

?The events that occurred following today?s football game have no place in college athletics and we are deeply disappointed by this incident, which detracts from what was a hard-fought and emotional football game between our state?s only two NCAA programs.

?We are examining all available video from the incident and working with the Mountain West office in a full review. Additionally, we are working with the University of Nevada, Reno Police Department to review the actions on the field and in the stands after the game.

?Rivalry games are at the heart of what should be great about intercollegiate athletics. We will continue to prioritize sportsmanship at all of our events, especially those between our two great institutions.?

Still, that wasn?t the worst part of it.

New video of UNLV captain Giovanni Fauolo Sr. jumping at the Nevada crowd and hitting a fan with his helmet before being pulled away by his teammates.pic.twitter.com/hI2m4HjQJB

If we learned anything from the Myles Garrett and Mason Rudolph fiasco from the NFL last year, it?s that a player swinging his helmet is a terrible, terrible thing. Apparently, UNLV football captain Giovanni Faulolo Sr. didn?t learn that lesson.

At the 45-second mark in the video above, and reported by NSN?s Chris Murray, Fauolo apparently swings his helmet at the UNR crowd and hits a fan with his helmet.

Nothing about this brawl is right. Arnold, a defensive back, shouldn?t have thrown the punch and the situation shouldn?t have been this bad. It was, however, and all we can do now is shake our heads.

This article was originally published December 4, 2019.