10 Players Who Will Have the Biggest Impact on Alabama vs. LSU 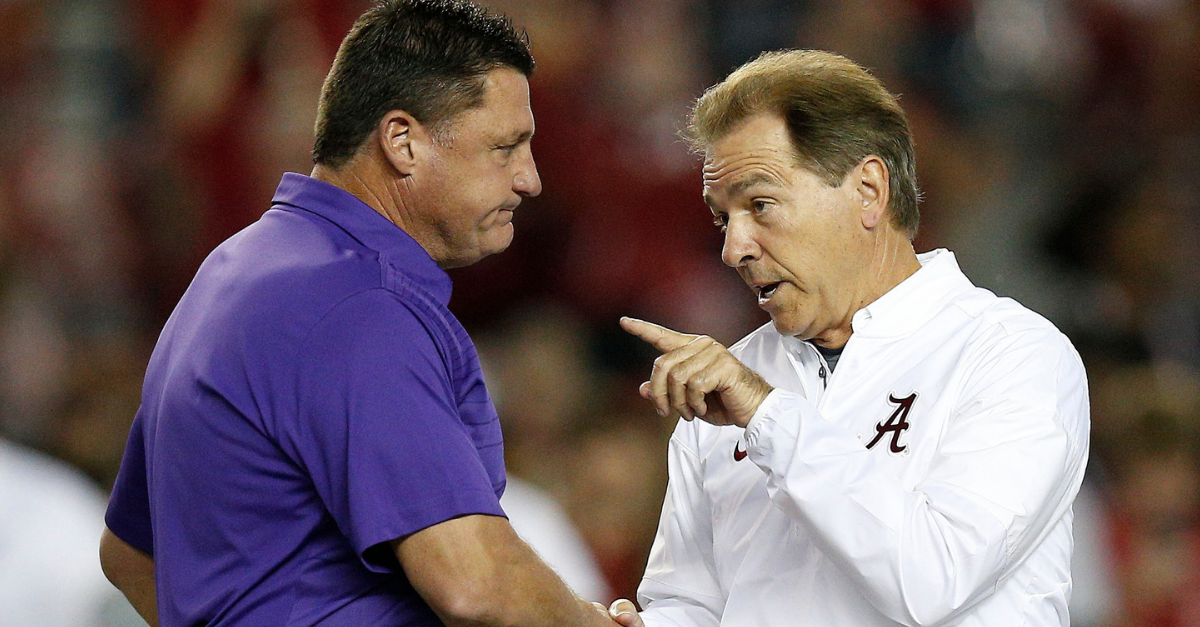 Just ask LSU head coach Ed Orgeron, there is no more important football game this season than when the University of Alabama takes on Louisiana State University this Saturday. The two are ranked among the four best teams in the first College Football Playoff rankings, and this game will likely decide the winner of the SEC West division.

Every detail matters when the Alabama Crimson Tide and LSU Tigers face off, and there are a few players who will be critical in swinging the game one way or the other in Baton Rouge.

If LSU has any chance of beating Alabama, they have to keep the ball away from the high-powered Alabama offense, and that starts with feeding Nick Brossette. The senior running back leads the SEC with 10 rushing touchdowns and is fifth in rushing yards (697). If LSU can use their running game effectively against an Alabama defense that allows 113.4 yards per game on the ground, then the Tigers have a chance to swing this game their way.

Look In The Mirror, What Do You See ? 👀
I See A Great Man ‼️@iamkevingates pic.twitter.com/6kuJr6Oluh

For the Tigers defense, there is one goal: get to Crimson Tide quarterback Tua Tagovailoa. Alabama leads the SEC, and is third in the nation, allowing only five sacks ALL season. Three times Tua has hit the ground, Jalen Hurts once, and third-string QB Mac Jones was sacked once. The key is to force Tua to start moving, and that pressure lands on outside linebacker Michael Divinity.

The 238-pound junior picked up the mantle after K’Lavon Chaisson went down with a torn ACL in September, and he is tied for the team lead with 4.0 sacks and has 7.0 tackles for a loss, despite missing one game. Divinity needs to collapse the pocket on Tua and hope to capitalize on the few mistakes this All-American offensive line makes.

On the other side of the field, senior defensive lineman Isaiah Buggs is as disruptive of a force as there is in college football. Buggs plays multiple positions along the defensive front and has made the most of his final season in Tuscaloosa. Buggs is tied for 8th in the nation with 8.5 sacks and has 9.0 tackles for a loss, both of which lead the Tide defense. LSU’s offense has been spotty at times, and Buggs forcing a turnover at some point could help swing this game.

Ladies and Gentleman prepare for takeoff

He burst on the scene during the summer, and quarterback Joe Burrow has been the toast of Louisiana ever since. Problem is, Burrow is going to need to play the biggest game of his life in Death Valley. Burrow’s 53.8 completion percentage and 118.2 passing efficiency rating both rank 13th in the SEC. Despite Burrow only having three interceptions (third fewest in the SEC), that alone isn’t going to beat an opportunistic Alabama defense. If LSU wins, it’s because Burrow makes the most of the spotlight on Saturday.

Andraez “Greedy” Williams was a third-team All-American in 2017 as a freshman, and the sophomore has rolled that momentum into 2018. He’s defended four passes, has picked off two more, and is LSU’s top cornerback. With the nation’s most explosive wide receiver in Jerry Jeudy, who is averaging 25.1 yards per catch, opposite him, Williams needs to help contain this passing attack however he can.

If you win the middle of the field, you typically win an Alabama-LSU slugfest, and nobody’s better at taking over a game in the SEC than preseason All-American linebacker Mack Wilson. The junior is one of the fastest linebackers in college football, and his sideline speed has paid off for the Crimson Tide time and time again. He’s the defensive signal caller of the Alabama defense, and his presence to neutralize the LSU rushing game can swing this game in Alabama’s favor.

Oh, Wilson missed the LSU game last year due to an injury. You can bet he’ll have something extra in store for Saturday.

Jerry Jeudy is the bigger statistical threat receiver, but this true freshman is becoming one of college football’s ELITE all-around players. The team’s primary punt returner, as well as their No. 2 receiver, Jaylen Waddle ranks second in the nation averaging 14.8 yards per punt return and is fifth in the nation with 21.8 yards per reception. Games like this can come down to one big play that swings momentum, and with all the attention being on Jeudy, Waddle might be the one who breaks this game wide open.

I got real running thru my veins … #FLYHIGH44 🕊

The last LSU Tiger to win the Bednarik Award as college football’s best defense player was safety Tyrann Mathieu in 2011. Grant Delpit could very easily become the next with the way he’s been playing this season. Delpit leads LSU in tackles for a loss (8.5), interceptions (5), and is tied for the team lead with 4.0 sacks. The sophomore is going to be a top-10 pick when he enters the NFL Draft in 2020, and he needs to be the one who makes a big play to change the momentum in this game for LSU.

The best quarterback in college football resides in Tuscaloosa, and Tagovailoa, as he’s done all season, could very easily put this game away before the fourth quarter even starts. The kid with 25 touchdown passes and zero interceptions is playing lights out, but he hasn’t faced a defense like LSU. Tagovailoa’s lingering knee sprain has had a week to rest, but it’ll be interesting to see if there are any lasting effects when he’s being chased around by the LSU defense. It’s Tua’s world, but the Tigers are going to be his first real test of 2018.

God Give His Toughest Battle’s To His Strongest Soldiers 🙏🏾 #GetLive40

The most impactful player in this game isn’t even going to be on the field for the first half. The junior linebacker was named the SEC Defensive Player of the Week four times in 2017 on his way to being named First-Team All-SEC and earning LSU’s team MVP. After a controversial targeting call in LSU’s game against Mississippi State, the team’s leading tackler (76) and defensive leader will have to watch the first half from the sideline. If LSU holds down the fort until he returns for the second half, Devin White is the perfect foil to finally slow down the beast that is Alabama’s prolific offense.