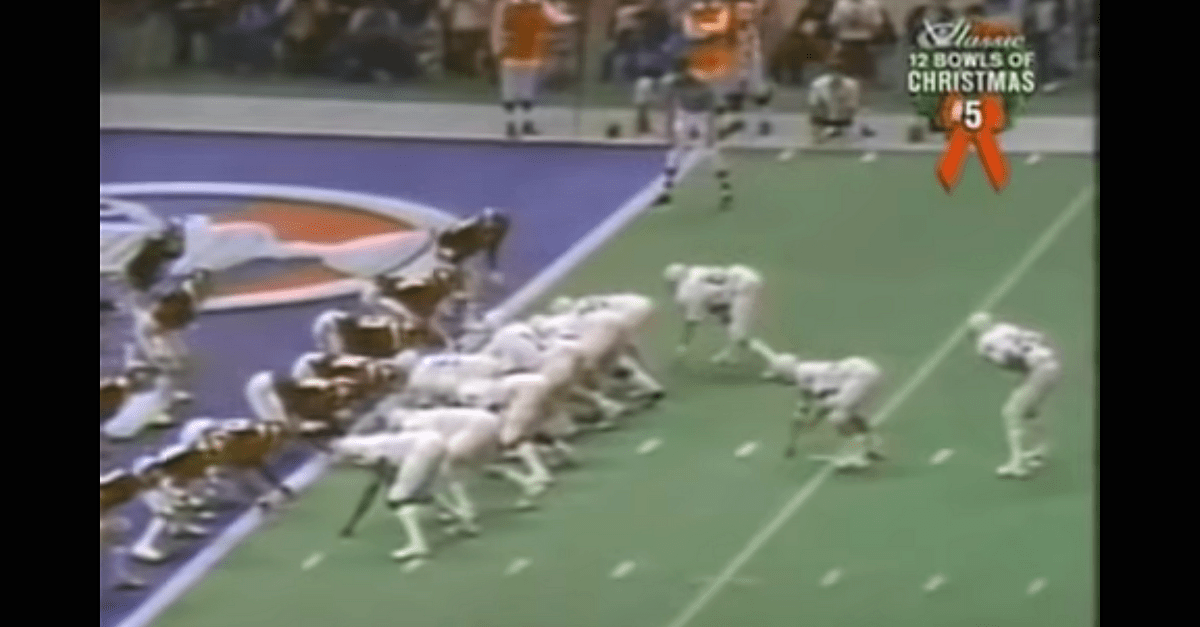 Modern college football is all about offense. Any game that doesn’t feature at least 40 combined points is getting dubbed a “snoozer” by just about everyone, but that wasn’t always the case. Before the days of 65-touchdown seasons and 819-yard performances, one adage meant everything: defense wins championships.

Unless you’re the Oklahoma Sooners, you understand that simply fielding a competent defense is critical to winning. That being said, football of the past revolved around elite defenses and just-good-enough offenses. I’ll direct you to the 1979 Sugar Bowl game for proof.

Alabama tore through eight straight opponents on its way to a No. 2 ranking and a bid to the 1979 Sugar Bowl against the No. 1-ranked Penn State Nittany Lions.#SECFB x #CFB150 » https://t.co/VW7DehGOcl pic.twitter.com/tDB264RuLZ

At the end of the 1977 season, Bear Bryant’s Alabama Crimson Tide were ranked No. 3 in the nation. They smoked Ohio State in the ’78 Sugar Bowl, 35-6, and saw the top two teams lose that same day. However, the fifth-ranked Notre Dame Fighting Irish had beaten No. 1 Texas, then jumped Alabama to claim the national title.

Bryant and company were out for revenge the following season, feeling they were robbed.

The Tide survived a ruthless non-conference schedule that included Nebraska, Missouri, and a road victory over defending Rose Bowl champion Washington. They clinched a 10-win season by beating Auburn in the Iron Bowl, and their only loss came against then-No. 7 USC at Legion Field in Birmingham.

It was No. 1 versus No. 2 with the national championship up for grabs.

Oh, and Alabama’s famous Big Al mascot made his debut at the Louisiana Superdome.

RELATED: Why Is Alabama’s Mascot an Elephant Named Big Al?

Set up by Lou Ikner’s 62-yard punt return, Alabama running back Major Ogilvie took a pitch and scored the go-ahead touchdown late in the third. Alabama’s 14-7 lead was slim heading into the fourth quarter, but that was all the offense they’d need before one of the greatest sequences in team history.

A fumble deep in Alabama territory gave Penn State the football with a chance to tie the game. However, it was Alabama’s defense, namely linebacker Barry Krauss, who stood tall when it mattered most.

3rd-and-Goal: Suhey gets stuffed by Curtis McGriff and Rich Wingo.

With six minutes still to play, Alabama ran off a huge chunk of the clock, giving Penn State almost no time to mount a final comeback.

For his heroics, Barry Krauss was named Most Valuable Player of the 1979 Sugar Bowl — He was the only defensive player in game’s first 75 years to win the MVP award until Georgia’s Marcus Howard in the 2008 Sugar Bowl.

Most importantly, that football game solidified Alabama football’s place on college football’s mountaintop with the program’s fifth national championship under Paul “Bear” Bryant. In case there was any doubt, the Crimson Tide went 12-0 the following year and were dubbed back-to-back champs.