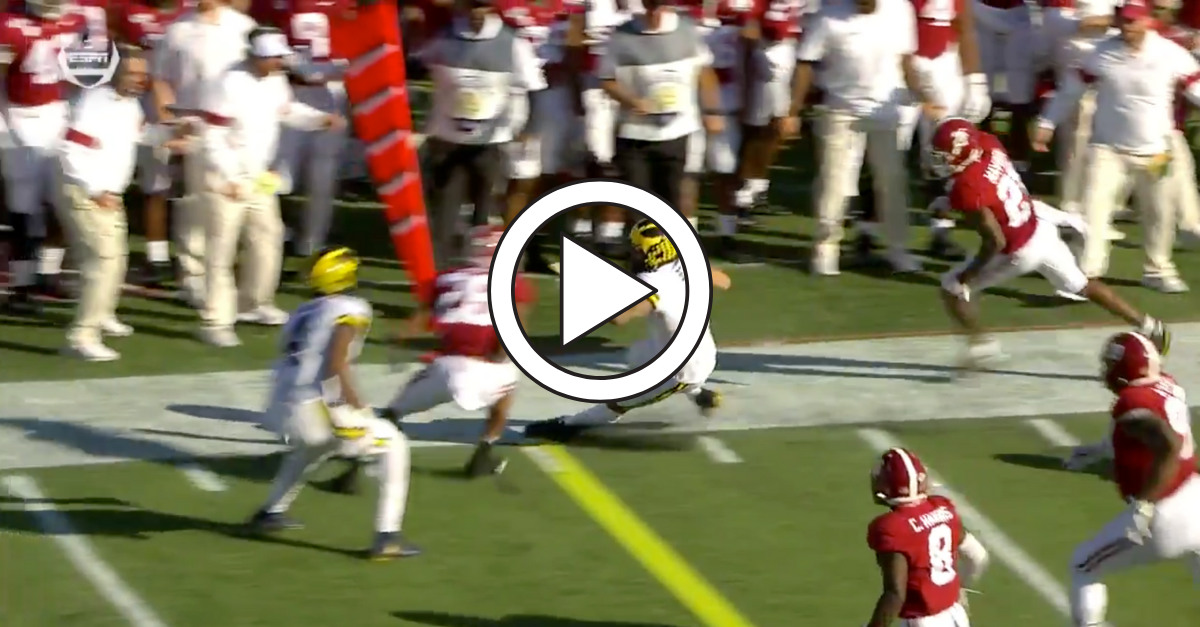 The Michigan Wolverines and head coach Jim Harbaugh started the VRBO Citrus Bowl on fire, and a 57-yard field goal by Quinn Nordin gave his team a 16-14 lead as the first half ended. However, after Alabama quarterback Mac Jones tossed a 42-yard touchdown pass to DeVonta Smith on the second half’s opening possession, the Wolverines sputtered, failed to score again, and watched Nick Saban and the Crimson Tide hold on for a 35-16 victory.

The Alabama Crimson Tide completed its ninth-straight 11-win season short of the College Football Playoff, but proved the program is as healthy as ever on New Year’s Day. Still, a great performance that didn’t even feature some of the Tide’s best players wasn’t without controversy after the final whistle.

The most popular point of contention stemmed from the Crimson Tide’s final drive of the game. Leading 28-16, Alabama marched down the field on a 12-play, 75-yard drive that ended with a Najee Harris touchdown run with 26 seconds to play. Rather than kneeling down and running out the clock, Saban and company went for the jugular.

“It was kind of a smack in the face,” Michigan linebacker Cameron McGrone said after the game. “But it is what it is. It’s football, we’ve got to be ready all times, and we weren’t ready that play.”

While running up the score caught the attention of most fans, others couldn’t help but remember two hits that probably should have been reviewed for targeting violations. Neither of them, however, were flagged, nor were they reviewed at all as most hits like these are in college football.

The first came early in the third quarter when Michigan wide receiver Ronnie Bell caught a swing pass from Shea Patterson in the flat. UA cornerback Josh Jobe, making his second career start, met Bell near the first down marker. Not only did Jobe leave his feet and launch, the former four-star recruit landed a thunderous shoulder to Bell’s helmet along the sideline.

The hit wasn’t flagged, nor was it reviewed. Jobe intercepted Patterson’s last pass of the game in the end zone.

The second hit occurred early in the fourth quarter when Bell was plastered over the middle by First-Team All-SEC defensive back Xavier McKinney. In this case, Bell was a defenseless player attempting to make a catch when McKinney hits him high in the chin. This one is definitely the more borderline of the two, but certainly carried all the elements you need for a targeting violation to potentially be called.

#Michigan got called for a questionable roughing the passer but neither of these hits on Ronnie Bell were looked at for targeting, one even called 'incidental contact'. May not actually be targeting, but not even worth a second look? #CitrusBowl #MICHvsBAMA pic.twitter.com/wrN5GPqZKQ

What is Targeting in Football?

According to Rule 9, Section 1, Article 4 of the NCAA rule book, “No player shall target and make forcible contact to the head or neck area of a defenseless opponent with the helmet, forearm, hand, fist, elbow or shoulder.” Article 3 specifically defines contact with “the crown of his helmet.”

All an official needs to confirm targeting is one of the following indicators be present:

By definition, both hits on Ronnie Bell had elements of targeting and therefore should have at least been reviewed by the officiating crew.

The other aspect when deciding a targeting call is determining if the player is defenseless. The NCAA rule book deems a defenseless player several ways, including “a player in the act of or just after throwing a pass” or “a ball carrier already in the grasp of an opponent and whose forward progress has been stopped.” These are two of several examples, but the only one we need for the hit by McKinney is this one:

“A receiver attempting to catch a forward pass or in position to receive a backward pass, or one who has completed a catch and has not had time to protect himself or has not clearly become a ball carrier.”

It’s impossible to speculate if these hits would have changed the outcome of the game, but losing two starting defensive backs late in the contest? This is certainly part of the conversation for Michigan fans who believe they left a lot on the field at the VRBO Citrus Bowl.