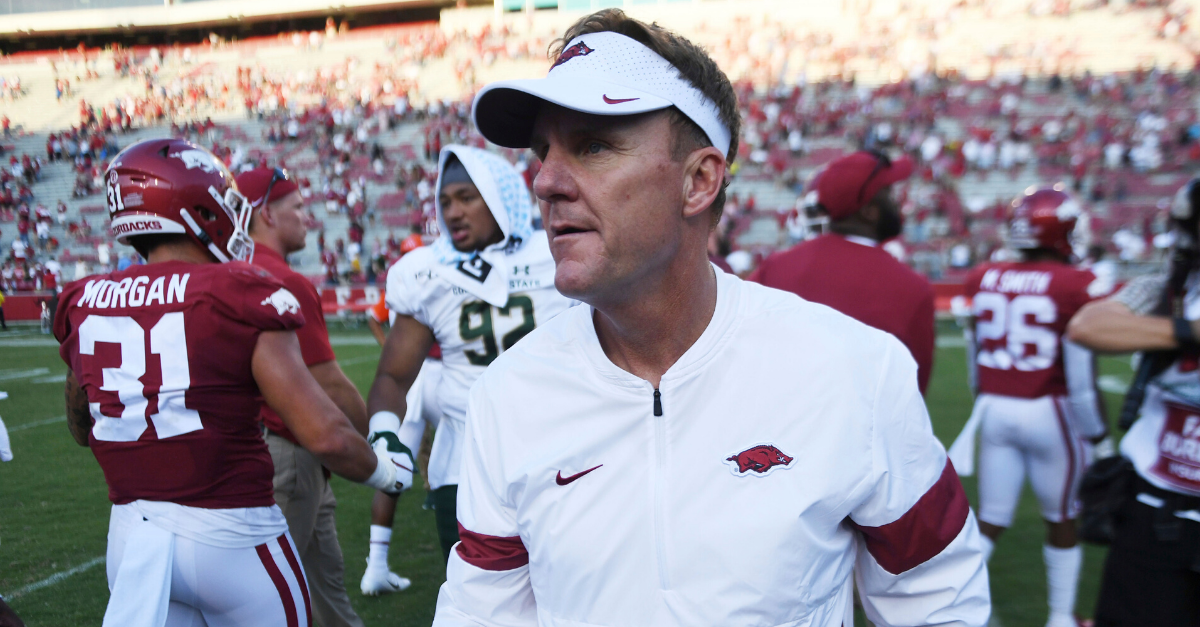 Former Arkansas head coach Chad Morris was fired as Razorbacks’ leader on November 10. The Texas A&M University alum went 4-18 in less than two seasons in Fayetteville, including losing all 14 Southeastern Conference games. Morris never found a rhythm in a loaded SEC West division, but that certainly didn’t mean one of the best offensive minds in college football would be out of a job for long.

On December 10, Chad Morris was named the next offensive coordinator and quarterbacks coach of the Auburn Tigers, filling a vacancy left by Kenny Dillingham, who took the same position at Florida State University.

“I’m super excited to have Chad Morris join our staff at Auburn. He’s a tremendous offensive mind who has had success with several top-ranked offenses during his time in the college ranks. I’ve known Chad for almost 20 years and he is a tireless worker and a perfectionist. He is a great addition to our program and I look forward to him helping Auburn win championships!”

Long before his days at Arkansas, Morris was a high school coach in Texas for 16 seasons. In only two seasons at Lake Travis High School, Morris guided the school to back-to-back undefeated state championships. That final stop earned him his first collegiate opportunity as offensive coordinator at the University of Tulsa, where his offensive prowess earned national notice.

Morris then took over as offensive coordinator of the Clemson Tigers under Dabo Swinney from 2011-14. Morris’ offense set 127 offensive records and annually ranked among college football’s top units. The Tigers were one of two FBS schools with a 3,000-yard passer, 1,000-yard rusher and 1,000-yard receiver from 2011-13.

Can you guess what happened when Morris received his first head coaching job with the SMU Mustangs?

Now paired opposite defensive coordinator Kevin Steele, the Auburn coaching staff is arguably one of the best and brightest you’ll find anywhere the country.

“I’m very grateful for the opportunity to join Coach Malzahn’s staff at Auburn. I’ve known Gus since the early 2000s and consider him a dear friend and someone that helped me get into the profession at the college level. I’ve admired the success he’s had at each of his stops and look forward to adding to the success that he, his staff and the players have built. We are excited about joining the Auburn family.”

Morris inherits a young Auburn offense that ranked third in the SEC in scoring (34.0 points per game) and fourth in the conference in total offense (421.1 yards per game) during the regular season. Morris’ first task will be building a relationship with quarterback Bo Nix, who figures to be the Tigers’ starter for two to three more seasons.

That is, unless four-star quarterback Chandler Morris, Chad’s son, comes to The Plains. The No. 14 dual-threat quarterback in America decommitted from Arkansas after his dad was fired. Virginia Tech, Oklahoma and USC are also potential landing spots for the Class of 2020 prospect, according to 247Sports.

Auburn faces 18th-ranked Minnesota in the Outback Bowl on January 1, 2020.